Kyle Shutt discovered himself a new artistic medium – literally: drawing album-sized portraits of his own face. That came in handy given COVID-19. “My entire way of existing in this world depends on huge public gatherings,” acknowledges the Sword guitarist. “So that’s a huge bummer.”

Celebrated heshers of nearly two decades now, Austin’s four horsemen emerged from the hiatus that followed sixth album Used Future in 2018 for a national tour with Primus and Wolfmother this month. Then pandemic laid to waste every summer concert calendar. Additionally, the bar and coffeehouse Shutt managed, Buzz Mill on Shady Lane, closed.

The longtime Austinite had no work, but he did have a few boxes of vinyl pressings for his eponymous solo album, which came out last year. A velvet painting of his mug and flowing locks, illustrated by artist Bruce White, adorns the LP cover. Signing a copy while on tour last year, Shutt drew a pirate mustache on himself and the proverbial light bulb flashed above his head.

“It’s got to have an element of Kyle to it, just the Ninja Turtle version of Kyle or whatever. One of my favorites is Robocop. It’s subtle joke, but I tried to make his eyehole high and squinty like he was stoned.”

“I thought wouldn’t it be funny if I did the Kiss covers,” he says, referring to the notorious quadruple solo album set the theatrical rock band issued in 1978. “I sold two of them, then went to Jerry’s Artarama and got a bunch of paint markers. I opened up the request line and the more weird requests I got, the more paint markers I got and the more inspired I got. I just started rolling with it.”

By March, Shutt’s variant album cover series emerged, but how much the project took off – and how much time he’d spend honing his art skills – surprised even the six-stringer. To date, he’s defaced – or rather, re-faced – over 50 LP covers, turning himself into pop culture figures like a Sleestak from Land of the Lost, Tiger King’s Joe Exotic, Audrey 2 from Little Shop of Horrors, Napoleon Bonaparte, and Willie Nelson. He fields requests through direct messages on social media, charges $50 with sliding scale exceptions, and takes on any challenge.

“Someone messaged me, ‘Do Larry David!’ and I thought, ‘How the hell am I going to do that?’” says he of the long blonde mane that’s at odds with the Seinfeld creator’s bald head. “Then they sent the money, so I was like, ‘Okay, I guess I’ll curb my enthusiasm.’” 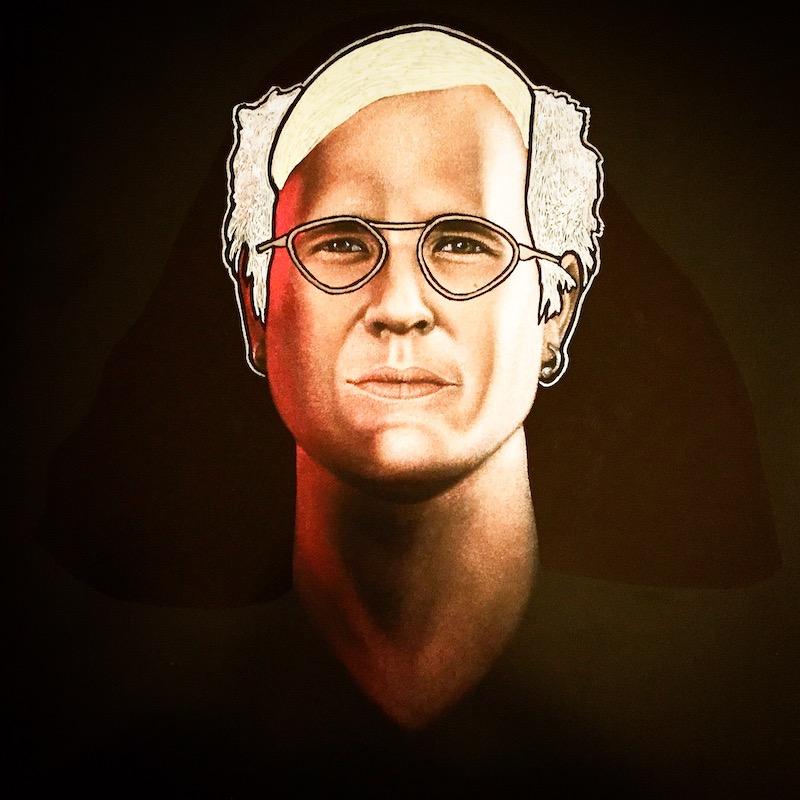 Shutt never simply paints over himself with whatever new subject.

“I want to incorporate the spirit of the request into my personification,” he explains. “It’s got to have an element of Kyle to it – just the Ninja Turtle version of Kyle or whatever. One of my favorites is Robocop. It’s subtle joke, but I tried to make his eyehole high and squinty like he was stoned.” Shutt says he’s noticed improvement in his skill set over the last two months, little things like getting the posture right and having strong lines. If fans ever run out of requests, he entertains a few ideas for future painting.

“I never had a passion to be painter or anything,” he admits, “but this weird idea came out of nowhere and then this quarantine happened, and it sort of became the thing that kept me sane. As an artist, you need to go where the people want you to be and it just seems like people want me painting silly pictures of myself right now.