Checking In: The Deer’s Grace Rowland Postponed Her Wedding – And Not by Choice

On March 20, Austin indie folk heroes the Deer wrote on Facebook, “So our gigs are all blown to the winds, cancelled or postponed. I can't believe we would be in full-throttle SXSW right now.” The next entry pops up May 7: “Tomorrow at 8pm: tune into our intimate acoustic live stream.” Stately, transportive vocal point Grace Rowland fills in some gaps. Grace Rowland: I’m sheltering with my partner Jack [Wilson] and his 6-year-old daughter at our home on South Manchaca, a few blocks from Radio Coffee & Beer, where Jack and I work.

GR: The last live music show we saw was March 12, Jack’s birthday. We had already lost several SXSW gigs, but would eventually see them all cancelled in the next few days. Our spring and summer tours were cancelled or postponed, and so were several music festivals we had booked.

I had just installed an art show in Radio – a series of cut paper light boxes I was excited to share with everyone – but Radio shut its doors to the public and set up a coffee/grocery stand in the parking lot, where they remain today. The worst part for me is that on top of all that, we were supposed to get married on April 11. When we had to postpone that, I knew things were really upside-down.

I was in some pretty intense despair for a week or so after that, to be honest. It was just so … surreal.

“I fear without the essential element of mass gatherings of the music industry and community, our art will fade into the peripheral.”

GR: I’ve been thinking about this a lot lately; what a huge part of our human nature it is to gather with each other. How my job revolves around it, but so much more. My heart revolves around it. It keeps me going, keeps me creating.

I feel like I’m nothing without my connections to my greater family. Playing online livestreams and making new singles for digital release is only a small part of what we do. I fear without the essential element of mass gatherings of the music industry and community, our art will fade into the peripheral.

GR: I'm going through the process of filing for unemployment, hopefully it works. The stimulus and my tax return helped, and was properly timed for this. I’m still making art, working on some larger-scale pieces, and writing/singing in my spare time, but not selling anything.

GR: Since we're quarantined with a kid half the time, we’ve been making a soundtrack for her to pass the days. Kacey Musgraves’ album Golden Hour is one of our favorites right now. The Fruit Bats, Anderson Paak, Abigail Washburn & the Sparrow Quartet, the Punch Brothers, and of course The Frozen soundtrack are hitting pretty heavy around here, mixed in with our friends’ music (Good Field, Milk Drive, Jesse Dalton vs. the State of Texas), and classic rock and country (George Harrison, Willis Alan Ramsey, Dolly Parton). 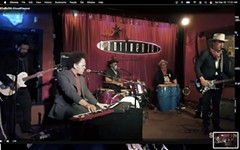