Checking In: BettySoo Invents the Corona-Gram™

Inside the beautiful mind of a reluctant livestream breakout

“It's difficult and bizarre for someone whose most dreaded part of work before was having to see themselves on video to transition to spending all of their time learning how to produce herself on video.” So offers BettySoo on live music’s new paradigm, instantly demonstrating a folklorist’s ability to tap a likely universal sentiment. BettySoo: I’m home in South Austin, isolating in the truest sense of the word. Or, if you trust some accounts, I’m here with my never-before-seen-in-public housemate Elizabeth Austin, who narrates audiobooks. Most of the time, I feel busy, overwhelmed, frantically thinking/re-thinking what I’m doing, making adjustments as I learn how to do these things well and asking why I’m doing any of it in the first place.

It's difficult and bizarre for someone whose most dreaded part of work before was having to see themselves on video to transition to spending all of their time learning how to produce herself on video. As my beloved Charlie said the other day, “Yeah, it’s a growth opportunity... but I didn’t ask for a growth opportunity!” We joke about it constantly, but in all honesty, I think most of us are learning things we’ve been putting off, because our ability to pay the bills depends upon our willingness to do so.

Maybe I’ll be better on camera after this.

The rest of the time, I battle depression, a lifelong struggle. Depression almost never felt like sadness to me. It’s more akin to an inability to do the things I most want to do and that I am convinced would make me feel better. So in a time when the enormity of tasks seems greater than usual, that’s a tough battle.

“For a person who REALLY hates seeing herself on camera, it feels like my ‘dream job’ is laughing at me.”

BS: The first major event I had to cancel was my Girls Who Do Boys Who Do Girls benefit for the SIMS Foundation on March 14. It’s a show I produce featuring a dozen-and-a-half songwriters from Austin, who each cover one song written by the next performer, and all the money goes to SIMS. I was able to produce it virtually, thanks to the generosity of the artists, who took the time to film or make an audio recording of themselves performing cover songs so I could stream it online to folks who made a donation.

There were really magical moments: James McMurtry sent a song he finished, started decades earlier by Rosie Flores together with John Prine. Raina Rose trilled her agile voice through the sinuous turns of a Curtis McMurtry song. Gina Chavez rocked a David Messier song with a synth sampler pad and looper station. Rosie performed a sultry cover of a Michael Fracasso tune.

My band Nobody's Girl had a busy 2020 planned, our spring chockablock with preparation for a July album release, but with the inability to get together, things have shifted. Plans for video shoots had to be re-imagined. Festivals have canceled, of course, and like everyone, we are just trying to read the stars each day and adjust our course as needed.

None of us knows how a harmony group translates to performance online with the lack of reliable software to perform or even rehearse together in real time. We’re hoping fervently some serious VC flows that way, but our friendship and our commitment to figuring out how to bring joy to our audiences and to one another remains as strong as ever. Together with our label Lucky Hound, we're looking at rescheduling the release for when we can tour together again.

Personally, the hardest and saddest piece is that my fiancé is far from me. We both travel a lot for our work – he’s a painter who travels to art events, openings, and to teach – so when we aren’t traveling, we aim to be together in the same place, whether in Texas or Vermont, his home. Unfortunately, both of our work is best pursued at our own homes, so we have been apart for the duration and have no idea when we will be together next.

Our three cats are with him, so I realized this Tuesday it had been seven weeks since I had touched another mammal! Knowing I’m not alone in that makes me more sad than brings me comfort. In this particular community, we are tethered to one another by a shared value of the live music experience. If we want to stay a supportive community, each of us will have to try to maintain one’s bond to the whole by working to accommodate others’ needs and by adapting one’s expectations to lovingly accept what others have to offer. I've seen friends riding this roller coaster in a dozen different ways.

A LOT of baking.

I’ve been saying for weeks that I keep expecting people to make little bundles of chosen families that then become isolated groups who are committed to limit their exposure to only one another. I think that’s coming.

For most of us who do this for our living, every day presents some lesson on how to do things like live streaming better: how to improve the sound, how to sync audio and video, how to make the lighting less distracting, etc. And the result is that the quality of the sound and visual aspect to most of our livestreams has been improving from week to week.

At the same time, I’ve seen audiences adapt from being really fed up with the degradation of the live music experience – going from having sound engineers, promoters, stage managers, sidemen, and the rest to one person wearing all the hats simultaneously – to accepting the blinky, wonky, interrupted experience an online show can be.

It feels to me like that’s all getting pretty close now to meeting in the middle, so I’m optimistic.

“I’ve been saying for weeks that I keep expecting people to make little bundles of chosen families that then become isolated groups who are committed to limit their exposure to only one another. I think that’s coming.”

BS: What it literally looks like is my little house has transformed into a Beautiful Mind-level spider web of cables. Ethernet cables, USBs, power extensions, XLR's, you name it, it’s strewn across the floor or tacked along a ceiling. And big picture, it looks like my favorite aspect of making music – collaboration – is off the table in many respects for the time being.

My income is even less stable than it was before, and I feel just as overworked as I ever was.

On the other hand, I’ve had dozens more phone calls per week than I normally do, and I’ve caught up with so many friends I wasn’t talking to nearly enough. I have been able to focus on finishing my website rebuild, I’ve been engaging more with my supporters on the BS Song Club, and strategic planning marches on for Nobody's Girl.

With Barbara Nesbitt’s encouragement, I’ve also started making custom “Corona-Grams,” personalized live music videos for folks to send to one another, and in addition to doing weekly shows – Nobody's Happy Hour every Tuesday, 6:30pm, with a special guest via Zoom, and the soon-to-begin BettySoo Rocks the House Tour, wherein I’ll perform on Facebook every Friday at 1pm from a different room in my house – I've started doing private parties online for groups of friends, co-workers, organizations, and families.

For a person who REALLY hates seeing herself on camera, it feels like my “dream job” is laughing at me.

BS: This is embarrassing. Like everyone, I’ve been digging the new Dixie Chicks and Fiona Apple and Eliza Gilkyson, and a dozen or more other new releases we are all in love with. But if I’m honest, the music I’ve been playing the most is old stuff: Roger Miller, the Sundays, Prine of course, opera, corny Nineties hit country, Crowded House, the Cars.

I hadn’t thought about what I’d been listening to or why. I guess it’s nostalgia. I want to listen to songs I know every note and word of.

At least I know where things are going. 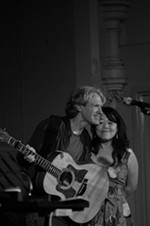 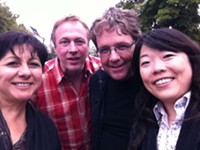