Lead cowpoke Mike Harmeier: “Nice being home for this length of time”

Cut at Abbey Road Studios with the London Symphony Orchestra, Mike & the Moonpies’ astounding 2019 album Cheap Silver & Solid Country Gold not only helped the local honky-tonkers nab a Best Country trophy at the Austin Music Awards on March 11, it’s perhaps one of the best ever of its genre out of ATX. Frontman Mike Harmeier emailed us a band status report. Mike Harmeier: I’m with my wife and son at our house in Liberty Hill. We’ve been remodeling a bathroom and cleaning out a studio space for me to record and my wife to refurb furniture for her rental business. It’s been nice being home for this length of time, actually. It’s been a long time.

MH: We played our last show on March 14 at Floore’s Country Store. We just kept hanging onto every show we had booked until they canceled one by one in the following days. Two weeks later, our calendar emptied through mid May. [Afterward], everyone went home and we all started brainstorming ways to monetize our time, whether that means streaming or recording from home.

“Everyone else in the band has also started building their own personal home recording rigs and we are gonna try to finish a record that we have been working on for the past six months.”

MH: I worry about venues that won’t be able to ride out the storm. I already know of a club in Houston that’s using this as a reason to eliminate the live music aspect of their business. Most people I know are “gig workers” and as soon as SXSW canceled, they were already scrambling to find jobs that could supplement the income they were going to lose. Then basically everything was canceled.

MH: I’ve been setting up a studio behind my house and ordered a new computer and some new mics. I haven’t done any streaming yet, but I plan on it since it looks like this is gonna go on longer than anyone first thought. Everyone else in the band has also started building their own personal home recording rigs and we are gonna try to finish a record that we have been working on for the past six months, with everyone just cutting their parts from home.

MH: We’ve been listening to a lot more music around the house lately. Trying to keep the news and TV off. Been listening to a mix of War on Drugs, Van Morrison, Bon Iver, Ray Lamontagne, and some Springsteen. Things the whole family can enjoy and that hopefully chill everybody out. 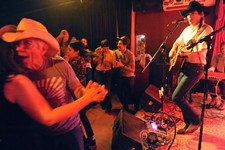 Behold a Pale Horse: the White Horse Turns Ten with No Signs of an Apocalypse
A look back at the early days of the “black sheep” of Austin honky-tonks