When local schools shut down suddenly on Friday, March 13, my wife swiftly descended on H.E.B. – along with half of Austin. Personally, I’d already begun hoarding earlier in the week: Waterloo Records, Antone’s Records, Half Price Books. When I walked into Breakaway Records around 4pm that day, not a soul stood in the front room. 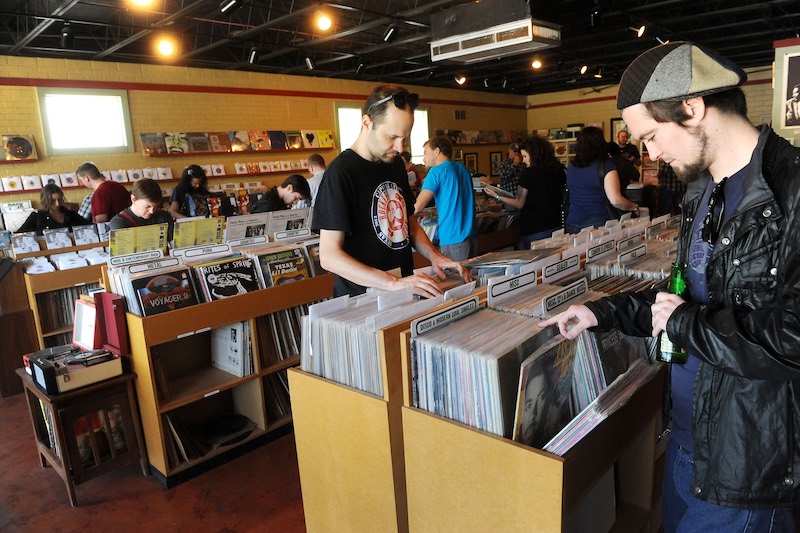 As the city made its run on essentials yesterday for the quarantine, I too stocked up - at Breakaway Records. We thus begin our real-life sci-fi Saturday at ancient English prog. “Ride My See-Saw.” pic.twitter.com/ZmuDoTiRki

Cascading forth as unto Howard Carter in Tutankhamun’s tomb, treasures long sought materialized as if sent by the gods: a near mint Powerslave – one never, ever, ever finds vintage Iron Maiden, let alone for $19.99 – not one but two near mint LPs of Pink Floyd’s Meddle, and the haul’s dark horse, a $1 near mint-vinyl (but slightly beat cover) copy of Paul Simon’s Still Crazy After All These Years. Its Simon & Garfunkel reunion, “My Little Town,” is a freakin’ chip off “Bridge Over Troubled Waters.”

“We’re scrambling to try and develop/execute an online presence (which is something I loathe) in order to keep SOME funds coming in to pay my dudes,” emailed Breakaway co-owner Gabe Vaughn yesterday. “We’ve been adding things to Discogs and our site as fast as we can. We’re shipping everything now, except for gear which we are arranging a drop off locally.”

Stereo gear, including the 40-year-old Japanese turntable that will run until the next ice age and which I purchased from Breakaway in 2018 as a living room centerpiece – where Vaughn himself made a house call to scratch the gunk off its needle for the idiot customer. Most local record stores supplement sales with playback methods (or vice versa in the case of Sound Gallery, Switched On, and Whetstone Audio).

“Since Monday, we’ve been doing mailorder and curbside pickup,” wrote in End of an Ear co-owner Dan Plunkett on Tuesday. “We have reduced hours from noon-6pm each day. Depending on news and further possible lock downs, we’re taking it day by day. Customers have been really supportive, calling and emailing in orders and also shopping our stock via Discogs.

“Luckily, we are bringing in some revenue [online], but it’s a far cry from a regular day. I guess nothing about this situation feels regular.” – Eve Monsees, Antone’s Records

“We started taking payments via Venmo too and that’s been popular. Employees are getting extra leave and we just have a small crew each day.”

A crew of one, sometimes, at Antone’s Records, according to co-owner and guitarist extraordinaire Eve Monsees.

“We are doing online orders exclusively right now,” she writes. “I’ve been going up there every day to package up mail orders and also post some photos, list some records, etc. Luckily, we are bringing in some revenue that way, but it’s a far cry from a regular day. I guess nothing about this situation feels regular.”

A manager at my other hood media emporium, Half Price Books on North Lamar, contacted me:

“Times are tough for HPB right now, and I’m trying to get the word out that we're doing online sales and are one of the few companies in the country that has an enormous media inventory and can ship anywhere in the nation. It’s a local company, family owned, they recycle, donate to schools, promote literacy, and give employees good benefits. We're trying to weather this storm.”

That’s more than 100 stores in more than three-dozen states as started in Dallas in 1972 by “just a couple of hippies who loved books and recycling.” Said description fits a few physical media outlets and empires around the area. Austin’s musical oasis waters many merch stands. Exploded Records, BLK Vinyl, Feels So Good Records, Big Henry’s Vinyl & Gifts, and Round Rock’s Piranha Records all made the Austin Music Poll ballot this year – and there are even more area brick-n-mortars than that (Groover’s Paradise!) – plus let us not forget Astro Records in Bastrop or Bluebonnet Records in Lockhart. “We were doing curbside service until Thursday when we thought it safer for our staff and customers to just close,” offers my brother in Blue Öyster Cult, Waterloo Records manager Paul Mason. “We did see some people doing curbside service but not too many and we just felt it was unsafe to continue to work around each other. We do a decent amount of mail order, but we fulfill most of that ourselves. We have figured out a way to have one of our suppliers fulfill our orders, so yes, we appreciate any and all business through our website.”

Gospel Sunday at our house, my wife requested Mavis Staples. Talk about reaffirmation in the face of disaster. Yesterday in the bunker, Hank Williams, Sr. eased familial anxieties. Tomorrow, I hope it’s a vintage, $10 vinyl copy of Supertramp’s Breakfast in America – whoever’s selling one, that is.