Band and Venue Cancellations Adding Up Amid COVID-19 Concerns

Following the cancellation of South by Southwest, Austin’s venue community began rallying with its own programming – hoping to salvage and survive through the financial hit of losing the local ecosystem’s the single most lucrative week. One week later, clubs and bands have begun announcing cancellations.

For a list of specific shows that have been canceled go to our Canceled Events page. We will be updating this post as more venues announce show cancellations or closure.

“We will decide week by week on a decision to reopen regarding the following week on the Thursday of each upcoming week, but for now we will be closed thru Sunday March 22, 2020,” ownership explained in a social media post. “We know what a hardship this is on everyone in our family including all our employees and musicians, but we are hoping if everyone is conscious of what is happening and exercise caution, we can get in front of this and hopefully mitigate the damage we are seeing in other parts of the country and the world.”

South Austin honky tonk Sam's Town Point has announced that it will be closed until April 12, the longest shut-down that any music venue has announced thus far. STP hosts multi-stage parties during the March music week and this year's programming - including Twister Fest and the Alabama Boogie - had been hotly anticipated. Co-owner Ramsay Midwood tells the Chronicle that the cancellation was the hardest business decision he'd ever had to make. The advanced age of bar's matriarch, Penny Grossman - who lives on the property - was a contributing factor, since she would be considered higher risk in a COVID-19 contraction, Midwood allowed. He also noted that the closure will give his team time to work on some game-changing expansions to the bar that were already in progress.

Campfire Gathering, a marquee lineup of songwriters and Americana acts scheduled to play Monday and Tuesday in Dripping Springs, has been postponed. New dates for the campout are unknown. Organizers cited “direction of the local and state health officials, as well as in light of recent developments” as factors in the shut down. A new date for the campout has not been released.

Meanwhile, back in town, Heard Events have cancelled their Music Tech Mashup concert series, which had been slated to host Questlove at the Empire Garage tonight, as well as all events throughout March. The Austin-based production company primarily books their Empire Control Room & Garage, as well as the Parish.

Austin's most renown independent bookers Margin Walker Presents have announced the cancellation of all their concert programming in Austin from now until March 22. All of their shows between March 23 and March 28 are being postponed. They wrote:

"Our priority is keeping y'all safe, and we will continue to defer to city and state health officials to determine the best course of action. Be safe, and thank you for your support & patience.

"This was simultaneously a difficult decision to come to as music fans, but a necessary and easy one to come to as human beings, and friends. Please stay home if you're sick and we'll see y'all on the other side of this."

That announcement closely followed an bulletin from Mohawk. The two-stage Red River venue also cancelled all shows through March 22 and postponed concerts between March 23-28. However, to provide work for their staff, Mohawk management writes that "Our indoor bar will remain open for business and we will be spinning vinyl for all of you that would like to hang out and discuss everything that's going on."

With live music bookings still up in the air, East Sixth watering hole Hotel Vegas will remain open. On social media, the venue posted: “Hotel Vegas will be open all weekend. Will there be bands? Dunno. Will there be beer? Yes. Picnic tables? Yes. Sanitizer? Yes.” The announcement follows a string of show cancellations at the venue, including tonight's Galactic Interactive and The Austin Chronicle's Hair of the 3-Legged Dog Day Party.

Major concert locale ACL Live at the Moody Theater also announced alterations to upcoming programming, including postponement of an upcoming Buddy Guy performance and cancellation of a Tyler Childers taping. The venue posted online: “Due to concerns regarding COVID-19 and the responsibility to protect our community, ACL Live has postponed or cancelled some upcoming events.” Find ongoing updates on their website.

The Electric Church has canceled an upcoming week of showcases. On Instagram, the Eastside venue wrote: “We did not want to do this but we don’t want to contribute to any potential spread. Stay safe y’all.”

Local psychedelic curators Levitation also cancelled two events intended for the March music week. For the next 48 hours, the group will donate all merchandise sales from their website to music industry relief fundraiser Banding Together ATX. On social media, the organizers wrote: “Shout out to everyone who tried to hang in there - artists, venues, staff, promoters and so many more behind the scenes.” Levitation’s annual local music festival is still on for Oct. 22-25. 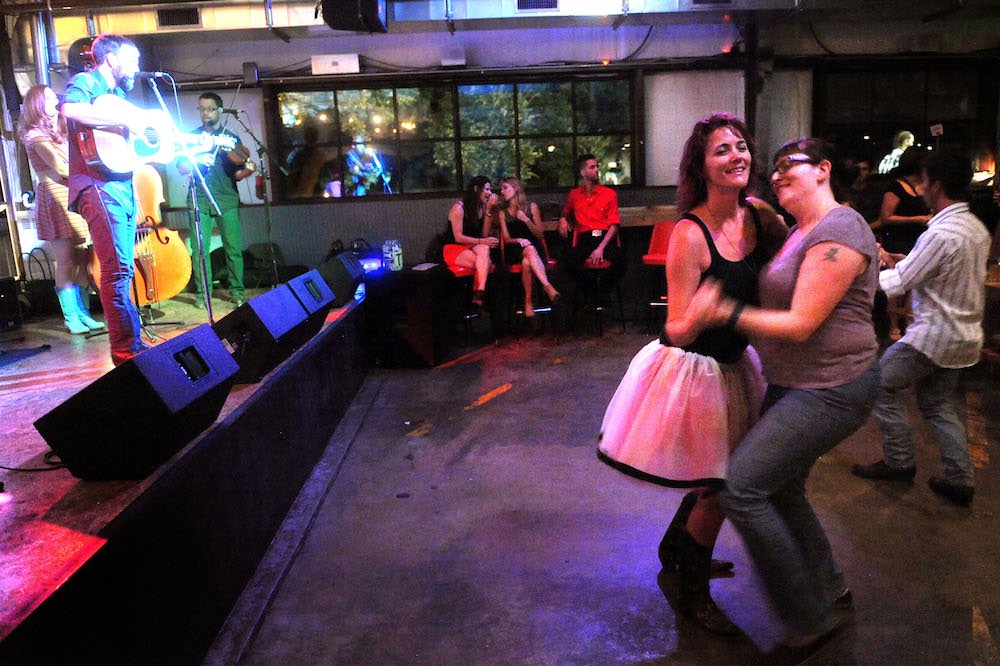 The ABGB in more two-steppin' times (Photo by John Anderson)

This afternoon, the popular Seventh Street music venue Barracuda posted: “Due to the evolving COVID-19 pandemic and the Governor declaring a statewide disaster for the state of Texas, we have made the very difficult decision to cancel all of our upcoming events beginning tonight through Monday March 23rd. We’re humbled by our creative community and the support we’ve received to try and make this still happen, but safety comes first. Stay home, stop buying toilet paper, and go listen to your favorite record.”

Also today, brewery and concert venue ABGB made the decision to suspend live music from tonight, through next week, while staying open.

Popular just-barely-Eastside venue, the North Door, has said its last show for a while will be tonight's. Otherwise the venue will be closed during what was Music Week. 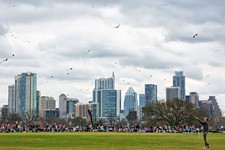 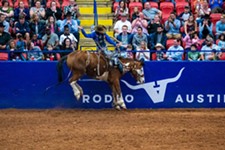 Rodeo Austin Is Canceled
City and county officials made the call