“Hello, my name is Austin Richard Post and I’m here to play shitty music and get fucked up,” announced Post Malone with a Bud Light-branded cup in hand. COVID-19 failed to deter the adopted Texan, and his devout following matched him virtually word for word and line by line as he performed before a seemingly sold-out Frank Erwin Center on Tuesday evening. 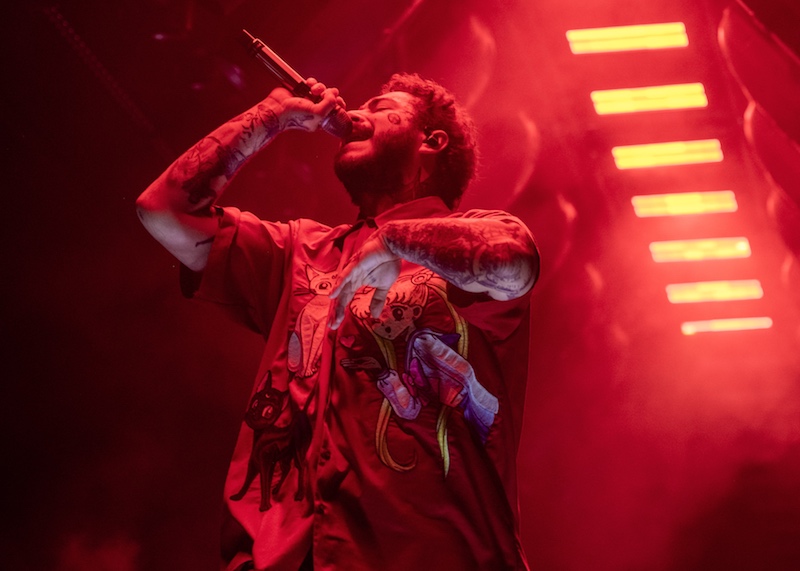 The Mississippi hitmaker went so far as proclaiming Austin a “top-five location in the world.”

The headliner, meanwhile, made a theatrical entrance. The stage featured a long runway flanked by two towering screens and a massive row of lights. The lights moved up from the runway to focus on the evening’s main attraction as he slowly came into sight to a rapturous reception.

Third studio album, Hollywood’s Bleeding travels further into a pop realm tailor-made for the singer. The native New Yorker, who moved to Dallas at 9, explained his desire to step out of his “comfort zone” on the September release. Songs like his self-proclaimed “weirdest” tune on the LP, “Allergic,” feature a slow melody and indie rock-style yelling of the song title.

Much of Malone’s discography features sad subject matter, but Club Erwin truly felt rowdy on Tuesday behind thumping drums, eye-candy graphics, majestic lighting, and pyro – lots and lots of pyro. Flames synchronized to the beat for songs such as the Ozzy Osbourne- and Travis Scott-assisted “Take What You Want,” which provided warmth in lower bowl sections of the doomed basketball arena.

Recent social media accusations of drug abuse and alcoholism due to out-of-context concert footage border on slander within the confines of Malone’s live prowess. The Grammy nominee danced to his music and fell to his knees repeatedly for emphatic exclamations. Both contradicted what one might expect from the usually laid-back figure.

It’s easy to dismiss much of the streaming behemoth’s music as Auto-tuned warble, but heartbreakers such as “I Fall Apart” convey very real and very raw emotion.

Malone further showcased his versatility by playing “Stay” on an acoustic guitar and eschewing Auto-tune. Video screens zoomed in on him carefully strumming as sweat dripped down his neck. He later smashed that same guitar during 2017 chart-conquering anthem “Rockstar,” because that’s what rockstars do.

Swae Lee came out to perform the chart-topping “Sunflower” before the guitar smashing and rolling back of eyes. The party ended with celebratory victory track “Congratulations” and pyro befit for a Fourth of July occasion. Even the most cynical of music purists could’ve found some enjoyment in this electric offering.