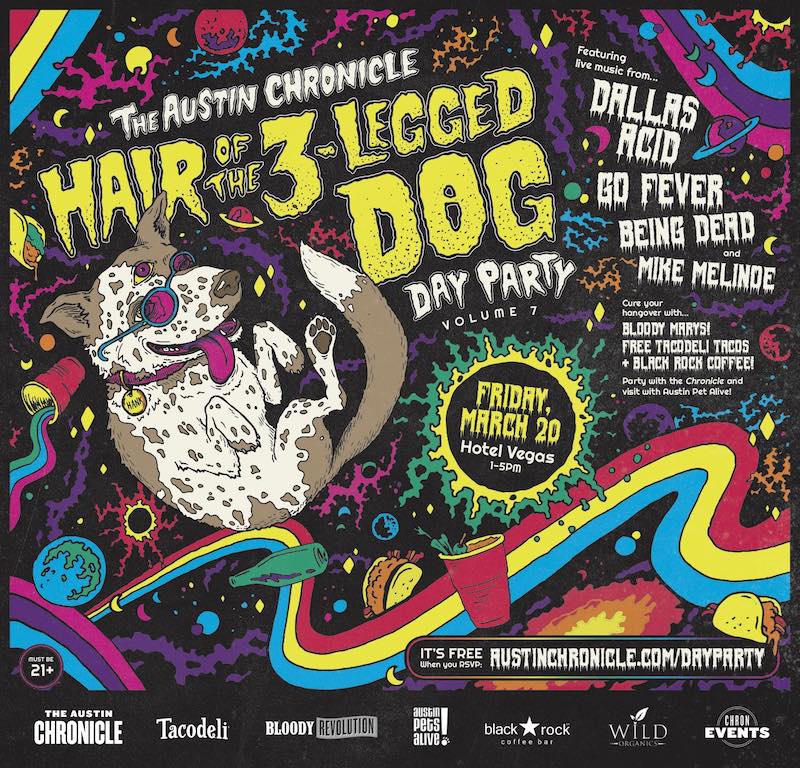 Until the city says otherwise, the Chronicle’s day party is still on.

As revealed by the trippy and drippy flyer appearing in our print edition today, the Chronicle’s day party for SXSW 2020 has taken shape.

The Hair of the 3-Legged Dog shindig returns to Hotel Vegas Friday, March 20, and welcomes sets from Dallas Acid, Go Fever, Being Dead, and Mike Melinoe.

The seventh annual event honors our office tripod, Hank, who oversees daily ball chasing and treat-eating duties at the Chronicle. He’s also the model for our founder’s art car, an old station wagon adorned with ears, a tongue, a tail, and paws on three hubcaps. Fittingly, the free day party showcases ways to donate and get involved with Austin Pets Alive.

Of course, the music lineup’s got our tails waggin’.

Our music staff has floated in space to the synth and gong explorations of local phenomenon Dallas Acid since Dan Gentile’s introductory documentation of their hulking modular synthesizer known as “The Brain.” The ambient output of Linda Beecroft, Michael Gerner, and Christian Havins continues to blow our minds, particularly a collab with New Age veteran Laraaji and last year’s interstellar 4-star LP, The Spiral Arm. The group, not typically found at South by Southwest-adjacent day shows, begins vibrating at 4:20pm. Before that, we’re proud to open the party behind a performance by Mike Melinoe, the Detroit-raised, Austin-based rapper who put out a stellar ralbum in 2019 called Clajidu (Currently Laughing at Jokes I Don’t Understand). The triumphant full-length followed a tumultuous summer where he’d scraped by sleeping on the top of a parking garage, he told us in December. Melinoe’s intense and engaging stage mode should provide enough rationale in getting to the party early, but okay, expect free Tacodeli Tacos and Black Rock Coffee, not to mention customary Bloody Mary’s.

Then you’ll see Being Dead and your life will never be the same. The loveably strange freak-pop tandem of Juli Keller and Cody Dosier – both drummers, guitarists, and vocalists – merge heavenly harmonies and hellish themes. Revisit Rachel Rascoe’s review of their April 2019 EP Fame Money Death by Drive By, which landed on multiple Chronicle year-end lists. Being Dead having high tea by a dumpster. (Photo by David Brendan Hall)

Ditto for Daydream Hawker from Go Fever, wherein the quintet dialed in a sound influenced by late-Sixties prom rock and turned it into an energetic melting pot of indie rock, New Wave, and synth-pop. Singer/guitarist Acey Monaro continues to emerge not only as a great lyricist but a stand-out presence in concert. They’re batting third and we can’t wait. 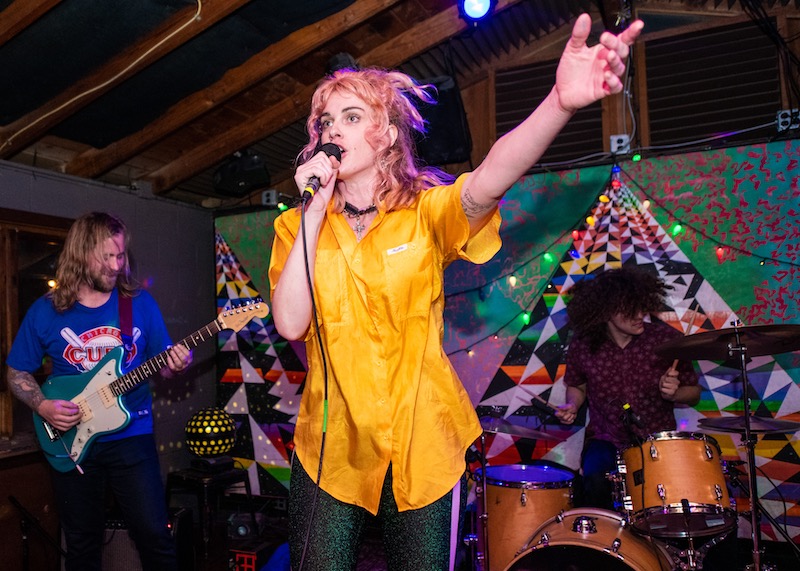 Neither should you. RSVP now, right here.