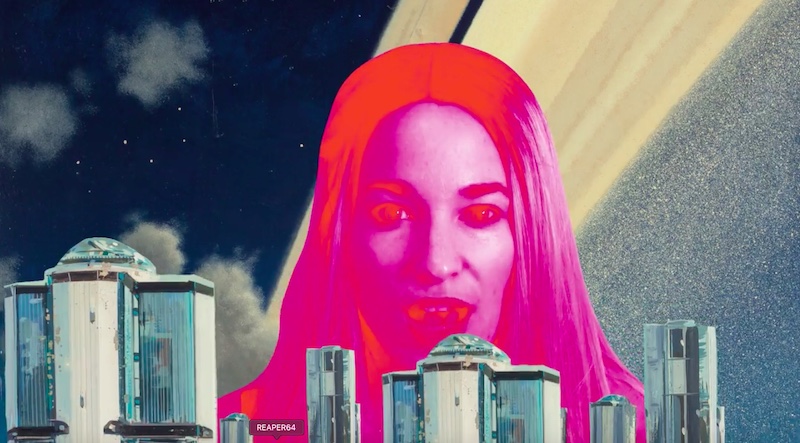 Dani Neff, looking like a nuclear horizon over a city, in the video for "Fluorescent Super Moment."

Watching Megafauna’s tripped-out new video for “Fluorescent Super Moment” feels like I just blasted off on DMT and received visions of an alternative history of Earth’s civilization.

The fast-moving animated clip – set to the asteroidal rock of the Austin quartet – shows wild mountains transform into bustling metropolises. Along the way, there’s dinosaurs, crocodiles eating clocks, ancient ruins, and freaky flowers flourishing out of unsuspecting places. Of course, it all revolves around an egg with a snake wrapped around it that displays its fractal yoke, then ascends into outer space.

If you’ve ever tried to watch Fantastic Planet while you were tripping and it blew you away even though you were too high to actually understand the plot, then you’ll love “Fluorescent Super Moment.”

Megafauna singer/guitarist Dani Neff says the song, off their 2019 LP Ghost Coast, had been inspired by Don DeLillo's novel White Noise, which posits the fluorescent supermarket as a creepy symbol of American consumerism.

”I wanted the fluorescent super moment to be in stark contrast to this, a glimmer of infinity, free and unfettered, incapable of being owned. In the song, I try to capture the super moment’s essence but it keeps slipping through my fingers. If I could only possess the moment fully I could understand but its meaning continues to 'shift and spiral' no matter how I chase it.

”Ben played on this with his psychedelic depiction of the creation of the world followed by the fall of the world, an endless cycle that begins again at the end of the video. We have no idea how he conveyed all of this in three-and-a-half minutes, but we're really pumped he did.”

Megafauna next on stage eye-awaking comes March 1 at Hotel Vegas where they’ll appear alongside Chew and Modular Sun. 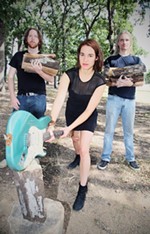