Video: ATX6 Addresses “That Gun In Your Hand”

On April 20, 1999, I was enrolled at a small university in Illinois when the phone rang. A professor of mine had tracked me down at my girlfriend’s apartment to tell me about an active shooter at a Colorado high school in my hometown. “What do you mean?” I asked him, not fully aware.

He explained that he’d seen a TV news report about gunmen entering the school and the ensuing siege.

“What school?” I asked, “ Chatfield or Columbine?”

I scrambled to the television and immediately saw a live, uncensored moment of one student, Patrick Ireland, climbing through a window shattered by gunfire. Covered in blood, he was justifiably prepared to jump from the second story window to safety. Some moments of crisis brand us forever.

The experiences of my adolescence are woven through Littleton, Colorado. That day changed America forever and 20 years later, school shootings populate a political thread in America. Each day, we’re at the mercy of our own actions – politically, socially, ethically, morally, philosophically.

Project ATX6 is a local audiovisual project sending six homegrown musicians to three international music festivals each year. This year’s musical entourage includes Leslie Sisson of Moving Panoramas, Evan Charles from Altamesa, Alesia Lani, Jonathon Horstmann of V3C0 and Urban Heat Island Effect, Kathryn Legendre, and Mike St.Clair of Pocket Sounds. The nonprofit program centers on the travel, the musicians, and the growth of the latter through the experience of the former.

Documenting the road experience of burgeoning artists on international stages and the music they bring remains crucial to the endeavor. In November, ATX6 traveled to Toronto for Indie Week, a festival that’s been supportive of our mission and very welcoming of Austin music from the start. Indie Week provides a variety of educational panels for artists, as well as showcases throughout Toronto. We always leave feeling invigorated and inspired.

In this video, we see Horstmann performing as V3CO at the Revival Bar in Toronto.

If you’ve seen him, you know he’s a political poet and a versatile musician of guitar, synths, and drums. You may be familiar with Jonathon from his work in Blxpltn. No matter the project, his poetry weaves a political tapestry that divides and unites a political conscience within us.

The video imbedded herein features the song “That Gun In Your Hand,” which addresses tragedies such as Columbine. This song takes me back to April 20, 1999, and learning that my friends, my family, and my community were targeted in the country’s first major school shooting. The song addresses what so many Americans have now experienced with alarming frequency: fear and fate of what cannot be forgiven or forgotten.

On that day, my brother was inside Columbine. My family waited an excruciating five plus-hours to learn whether he was alive or dead. In fact, he was one of the last to escape.

His story is not for me to tell. And in truth, I’ve heard it only once. I may never hear it again. 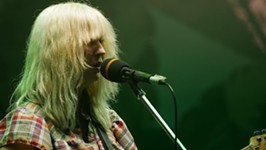 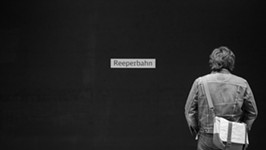