Roddy Ricch Boxes Himself In at Sold Out Emo’s Show

The meteoric rise of Rodrick Moore Jr. into the mainstream continues to amaze. The rapper known professionally as Roddy Ricch quickly sold out Emo’s, where Antisocial Tour touched down Thursday night. According to the Compton MC, he’s sold out every stop on the promotional trek. The 21-year-old Californian’s success reduced pop superstars Justin Bieber and Selena Gomez to shameless social media pleas in hope of usurping hip-hop’s newest heavy hitter. December’s studio debut on Atlantic Records, Please Excuse Me for Being Antisocial, topped the Billboard 200 in its debut week. Fast-acting supporters in attendance witnessed an act with the No. 1 song in the country put on an unspectacularly enjoyable show inside of a relatively compact setting.

True to his album title, no artists performed in support of Ricch. A standard DJ set preceded the lights onstage turning black and a melancholy instrumental bringing out the main attraction to deliver the new album’s “Intro,” which encapsulates much of what makes the 2019 XXL Freshman so popular. Offering a soundscape differing from the bland loop of 808s abused by his contemporaries, solid songwriting conveys the effects of an upbringing in the streets, catchy melodies, and infectious ad-libbing plucked from Atlanta trap lords Future and Young Thug:

“’Cause I ain’t sure when my dawg had to make the news reel. Got promethazine in my eyes, I’m cryin’ purple tears. The streets left me cold-hearted, they hurt me still.”

Please Excuse Me features exquisite transitioning. “The Box” follows “Intro” on the album and the same transition occurred at the show. A massive roar preceded over 1,500 people squealing the very meme-able “E-ERR.” The chart-topping single and viral hit on video-sharing site Tik-Tok filled the East Riverside Drive venue to the brim as performer and crowd went word-for-word.

Ricch loves him a piano. He played the opening portion of “Perfect Time” live on the keys in tandem with a ski-masked guitarist. Unfortunately, the naturally low-pitched rapper found himself playing third fiddle to the stringer and backtrack.

“This my first tour,” he said. “Seeing a room full of people singing my shit is crazy.”

The now three-time Grammy nominee dedicated a portion of the show to Nipsey Hussle. Ricch credits the late genre martyr for being the first West Coast rapper to give him a public co-sign. The two collaborated on the Grammy-nominated “Racks in the Middle,” Hussle’s final single before his tragic death last March. Hussle proved the only feature verse of the evening.

The 51-minute set came to a close with its maker telling fans to put a No. 1 in the air to honor “The Box” making history before performing the smash again. And when faint chants for an encore ensued after he’d left the stage, he came back out one last time and “The Box” received a third performance. Roddy Ricch is only the fourth solo rapper in history behind 50 Cent, the Notorious B.I.G., and Kanye West to top both the Billboard Hot 100 and Billboard 200 simultaneously. 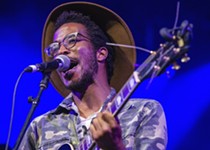