The illustration came into my possession last Monday morning. 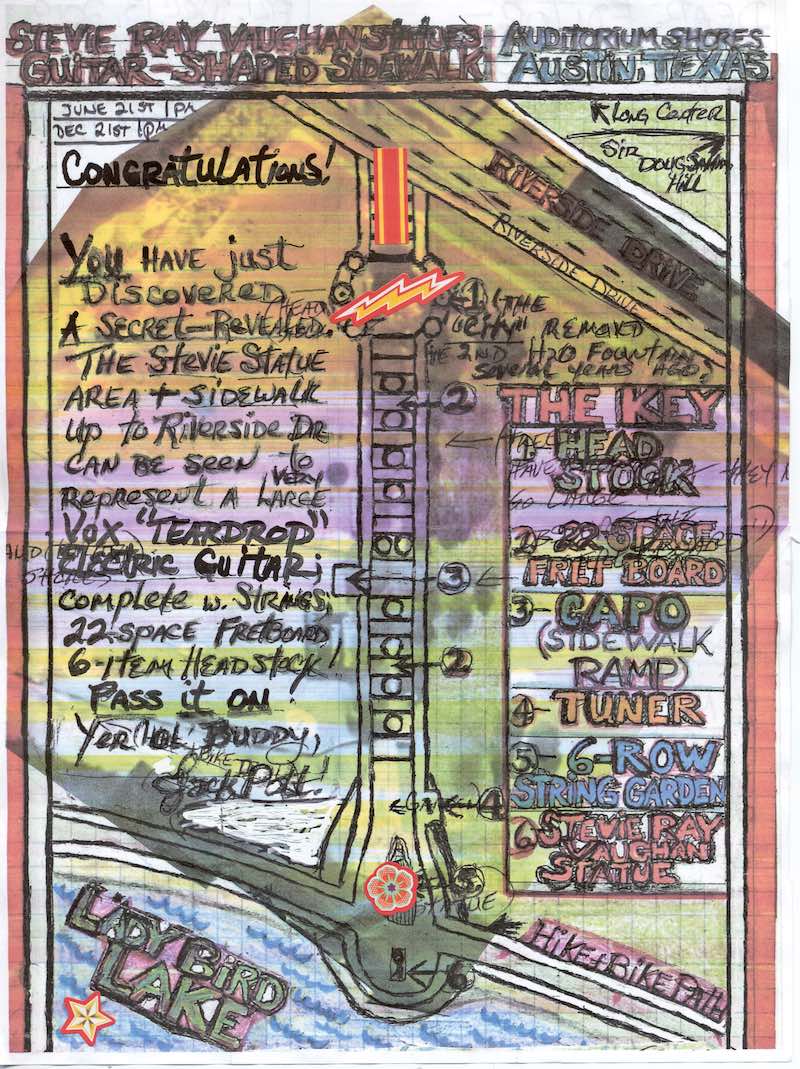 The illustration detailing Jack Pott's theory that there's a secret guitar laid out in the design of Auditorium Shores, surrounding the Stevie Ray Vaughan statue.

I’d arrived early to work, pulling into the Austin Chronicle’s gravel parking lot just as the paper’s founder and publisher, Nick Barbaro, exited his dog-shaped station wagon. With him was Hank – the art car is modeled after the three-legged pooch – and a grip of mail. From it, Barbaro handed me a letter and asked me to look into it.

The envelope had been decorated with no less than six colored markers, seven stickers, and a Woodstock stamp.

Of course, most of our readers communicate with us via email and social media. Others, like a gentleman recently claiming to have a “real” jackalope, bring their would-be stories directly to the front desk receptionist.  Meanwhile, in 2019 we still receive an impressive amount of handwritten letters – sometimes from prison inmates, sometimes from old hippies.

This particular communion came from the latter. Above the return address was the name “Jack Pott!”, who I recognized as someone who has historically mailed in a copy of his Austin Music Poll ballot, filled out by hand and loaded up with extra color, stickers, and footnotes. In the ensuing days, I’d learn his real name is Jack Ortman. I opened the envelope:

Dear Editor,
Due to several years' worth of research, I have happened upon some new realizations.

Please inform your readers that the secrets of the Stevie Ray Vaughan statue shall be revealed on Sat., Dec. 21, at 1pm, free! The information is time sensitive, so it is important to be on time. See you at the statue!

The other side of the letter shocked my eyeballs – just an astonishing amount of color and information to exist on one 8.5-11 inch piece of paper.

It showed a hand-drawn, aerial view of Auditorium Shores with Lady Bird Lake on the bottom and Riverside Drive at the top. In between, a stone footpath that leads directly up to the Stevie Ray Vaughan statue. On the illustration, the specific characteristics of that path were highlighted and decoded with a six-item key on the right side of the page. All the information pointed to one clear hypothesis: This part of the park has been designed to look like a giant guitar.

The illustration contained a message from its author:

As I examined and reexamined the map, equal measures of respect and skepticism filled my mind. It’s heartening that, in an age when so many eyes are continually affixed to glowing screens, there’s someone finding deep intrigue in their physical surroundings. And as far as conspiracy theories are concerned, going all Da Vinci Code on the statue of a blues-rock guitarist seems charming compared to QAnon. Still, I just couldn’t understand the motive: Why would a Parks & Recreation Department employee want to hide a guitar so large it can only be enjoyed subconsciously… or by plane?

Was it really possible that park planners had secretly designed the Stevie Ray Vaughan statue area to look like a giant guitar? And that no one – until now – had ever noticed?

Some of the elements illustrated on the map are worthy of note: the 22 slabs of sidewalk equatable to a fretboard, how the six-row flower bed could represent guitar strings, and that there were originally six items at the end that might symbolize tuning machines. At the same time, I saw several red flags – most notably that Stevie Ray Vaughan didn’t play a Vox teardrop guitar, which were known for their popularity with British Invasion bands.

I called the number on the envelope and spoke with Mr. Pott!, who came off no more or less eccentric than a letter like his might implicate. I promised him we’d publish his message inviting the community to see his findings, but I also needed to know why he felt it was important for him to reveal this. His response was honorable: “I just think that if I didn’t know it, I’d want it pointed out to me.”

I agreed to meet him, “but why at 1pm on Saturday?” I asked. Pott! explained that he’s noticed that on Dec. 21 at 1pm every year, the real shadow cast by the sun over the SRV statue perfectly lines up with the fake bronze shadow that’s part of the statue’s design.

Dec. 21 happens to be the winter solstice.

A couple days later I phoned Ralph Helmick in Massachusetts. He's the sculptor who crafted the SRV statue, which was installed in 1994. I left him a thorough voicemail and emailed him scans of Jack Pott!’s illustration and theory about the park design looking like a guitar. He wrote me back to say, “No, there is absolutely no hidden guitar on site, nor was there any guitar theme in the site design.”

Eventually I realized that if I was ever going to get to the truth behind whether or not there are elements of landscaping at Auditorium Shores vaguely resembling an obscure British guitar model, I needed to confront the people who would likely be behind such a mystery. It was time for me to call the city’s Parks and Recreation Department.

After enlightening several employees to the secrets of the statue and disseminating the illustration throughout the department, I received a call from Kim McKnight, manager of Historic Preservation and Heritage Tourism for Austin Parks and Recreation. She led off by telling me that she was impressed by Mr. Pott!’s creativity, then gave me this statement:

“We think this is clever and fanciful, but, to the best of our knowledge, there was no original design intent to make Auditorium Shores look like a giant guitar from an aerial perspective.”

I didn’t share their denials with Jack Pott! ahead of his reveal – seeing no reason to rain on his parade. Speaking of rain, I woke on Saturday to find the sky a dreary gray and wondered if the sun would even shine enough to cast a shadow. If it didn’t, would Pott! have to wait another full year to reveal the secrets of the statue? If it did, would the shadows align, then the base of the statue crack open and the ghost of Stevie Ray Vaughan rise out and play the lick from “Rude Mood”?

Eventually the clouds made room for the sun and it became idyllic mid-December weather in Texas. I arrived at the statue at 12:55pm to see Mr. Pott! with about 15 spectators gathered around. Sure enough, the shadow of the statue was cast directly over the installation’s mock shadow – he noted to me that on the summer solstice, there is no shadow at all because the sun, at that time, shines directly overhead. At the feet of SRV were several binders of information, piles of paper handouts, and larger pieces of poster board detailing his findings. It struck me then exactly how much effort he’d put into this reveal.

Jack Pott! stepped up onto the base of the statue and addressed the crowd: “Today we’re gathered on the shores of Lady Bird Lake to celebrate the winter solstice, Dec. 21. I have some observations I’d like to share with you and some reveals. I’d like to say right up front, there’s are all conjectures on my part, nothing is written down. This is either my overactive imagination or I’m crazy – one or the other, but it’s kind of my Christmas gift to Austin.” 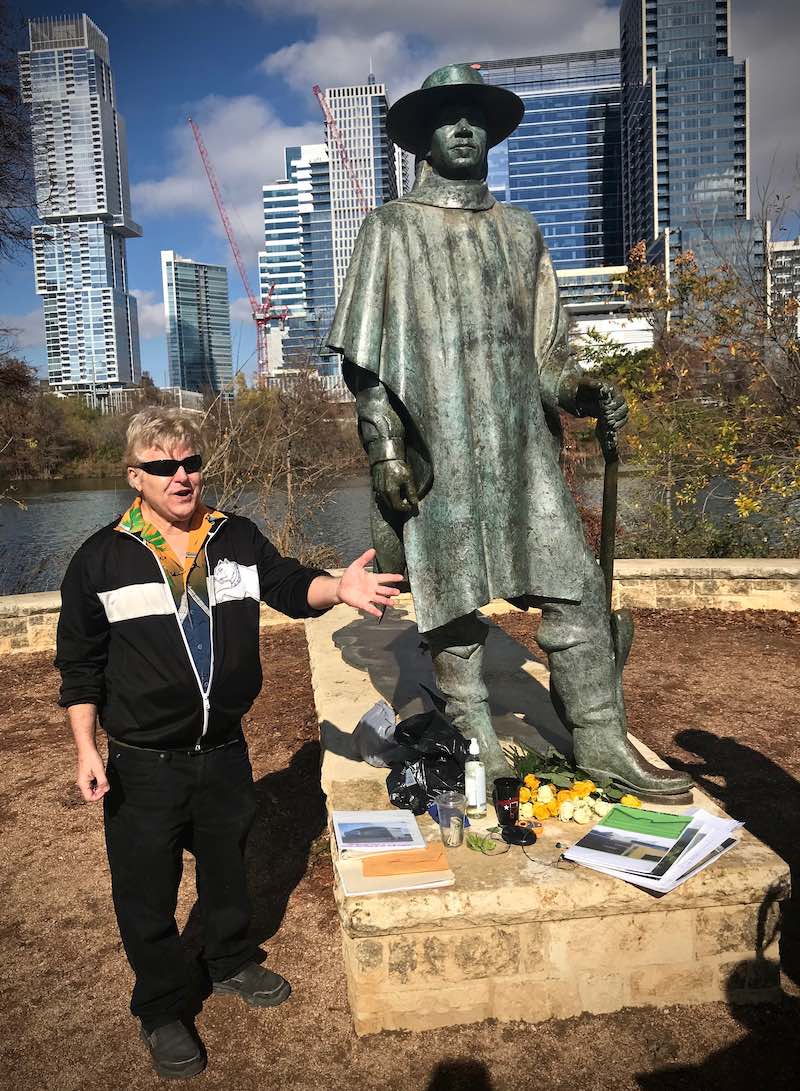 Soon, Pott! was pointing over the river to the newly built Central Library, showing how the architecture of its roof really looks like an open book. He then turned attention eastward to City Hall, identifying the ways in which it looks like an armadillo – including a head, arms, armor, and the architecturally erroneous point on its backside, which does indeed look like a tail. Next, we looked at the Palmer Event Center and – by god – it really does appear to be roughly in the shape of a bat.

Finally, Jack Pott! walked the group through the supposed guitar, while his assistant dropped circular fret markers – adorned with the names of Texas musicians like Gatemouth Brown, Freddie King, Carolyn Wonderland, Charlie Sexton, and Mance Lipscomb – on the pieces of concrete.

As he pointed out the features, oldtimers began sharing memories of seeing Stevie Ray Vaughan perform – many of them had witnessed him perform right there at Auditorium Shores – and recalling where they were at when they heard about his untimely death in August of 1990. These experiences where communal, something that connected them.

I asked Pott! if he believed the creatures and instruments that he saw in the city around him could be inadvertent.

“No,” he said. “There’s just too many things for it to be a coincidence.”

I disagree, at least in terms of the hypothesis that there’s a massive Vox teardrop guitar intentionally hidden in the layout of Auditorium Shores, but that doesn’t really matter. We’re not talking about whether the pyramids at Giza are geographically oriented to the stars in the Orion constellation or what the Knights of the Templar may or may not have hidden in Nova Scotia’s Oak Island. This is a man who sees one of his musical hero’s guitars in a place where people walk their dogs and have picnics. This is more akin to looking at the clouds and saying “I see a rabbit...” “I see a pirate ship...”

If you ask me, we don’t do that enough.