Moody Center Groundbreaking Promises the Finest Arena in the NCAA

On Nov. 21, Texas Athletics announced a groundbreaking ceremony for the Moody Center, which will become the new home of Longhorns basketball, music/entertainment events, and various UT commencement ceremonies during the first quarter of 2022. A live performance from Moon Taxi and an abundance of food trucks accompanied yesterday’s celebration. 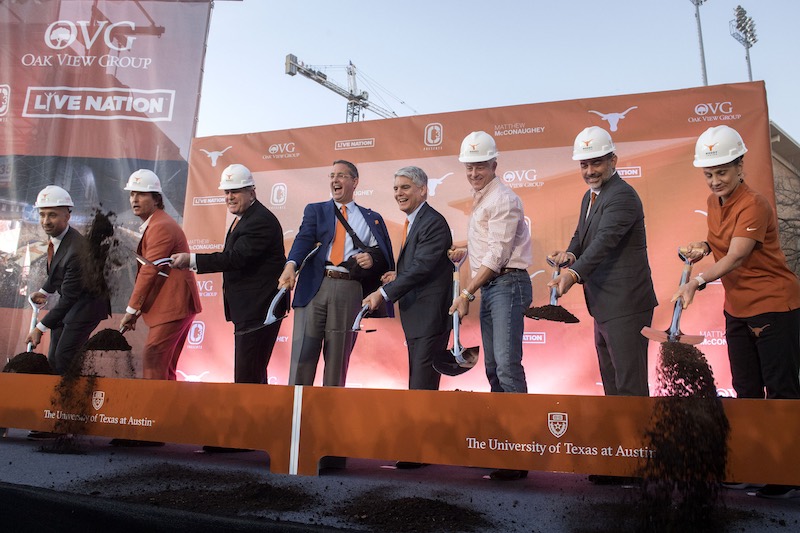 “If we were using basketball lingo, we would call this the dream team,” UT President Gregory Fenves ventured regarding the combined effort of UT, Oak View Group, C3 Presents/Live Nation, and Matthew McConaughey to make the Moody Center more than renderings. Fenves credited the Oak View Group partnership as critical in actualizing his vision for a facility that wouldn’t cost taxpayers or students a dime to construct. The Los Angeles-based company will build and operate the $338 million arena. “We don’t need to spend any public funding, or any student or university funds to build this arena,” announced Fenves to applause.

The Moody Foundation donated $130 million for the project. The gift is the largest single donation in the history of both the local charitable organization and the largest given to UT Athletics on behalf of one foundation.

“The trustees of the Moody Foundation, my sister Francie Moody-Dahlberg, and now my daughter Elle Moody and I recognize that both the University and the Austin community needed a new and improved sporting, special events, and live entertainment arena,” said Ross Moody. “The new Center will add to the University’s goal of building a community – a community that unites all of us.” “This is going to be the finest arena built in all of the NCAA, we are guaranteeing that,” Oak View Group CEO Tim Leiweke said. “We have the best two partners I’ve ever been involved [with in McConaughey and Live Nation]. You will not believe only the success that we will help create for this campus and this athletic department, but for this city. You’re about to become one of the most important music cities in the world and you deserve it.”

McConaughey added that the arena needs to become a fortress visiting teams fear. Attendees who RSVP’d the event were eligible to claim free tickets to the UT vs. University of Alabama at Birmingham men’s basketball game at the Erwin Center. Proceedings inside the now 42-year-old arena didn't deviate from normal affairs. Official attendance for the Tuesday matchup listed at 14,552, but half-eaten pumpkin pie slices suggested unclaimed tickets from the Moody ceremony. The figure nonetheless represented a stark increase from the average attendance of 8,379 through the four previous contests.

The Longhorns team, meanwhile, never quite put away their mid-major opposition en route to a 67-57 victory.

On the court, Andrew Jones continues to thrive in his sixth man role. The redshirt sophomore matched his career high of 20 points with six three-pointers. He received a medical redshirt for the 2017-18 and 2018-19 seasons after being diagnosed with leukemia.

The Irving native completed his final set of treatments in mid-September. In some ways, Jones represents the future of the Longhorns basketball program. There’s finally reasons to believe again.

Find more photos of flying dirt and clean people throwing it in our photo gallery. 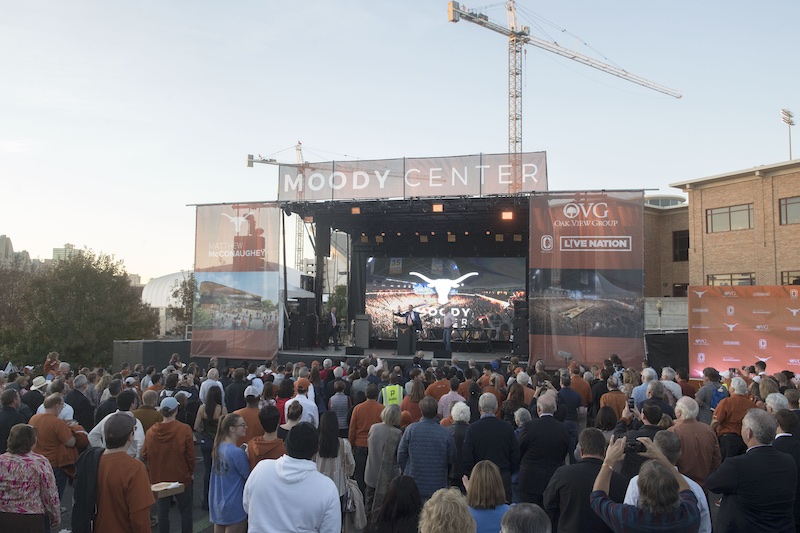