Fresh off a pair of Bauhaus reunion shows, David J Haskins thrilled the home of Austin goth subculture Friday night with a career-spanning acoustic set. Backed by Czech pianist Robert Vacisek, the erstwhile bassist of college rock staples Love & Rockets concentrated on his latest double album, Missive to An Angel From the Hall of Infamy and Allure. 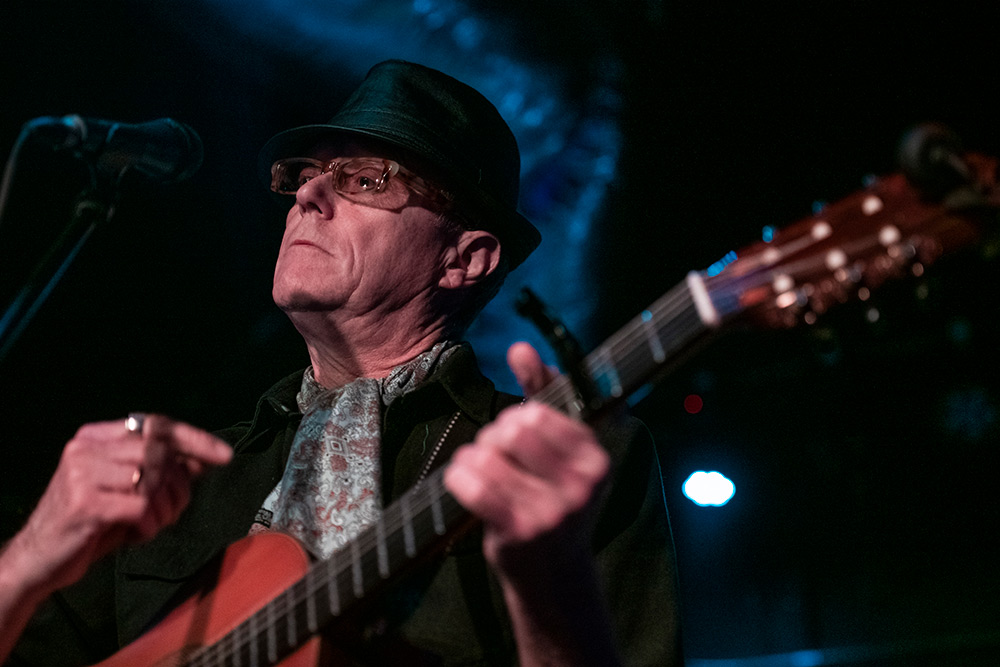 The British native and L.A. dweller touched on all aspects of his career, including songs from his back catalog, his theater work, and even a new tune. If his Elysium show betrayed any precedent from Haskins’ CV, it would be L&R, whose similarly eclectic repertoire defies stylistic pigeonholing.

Preceded by Roky Erickson’s “Night of the Vampire,” the singer opened with the new album’s “The Auteur,” which serves both autobiographically and as a bittersweet commentary on its maker. Indeed, Haskins spent a portion of the 75-minute set mocking the mid-level rock star’s lifestyle, including the unrequited groupie desire of “Blue Eyes in the Green Room” (dubbed by one wag “Blue Balls in the Green Room”) and “Copper Level 7,” and the gentle fan tribute/send-up “Goth Girls in Southern California.”

He leavened the jokes with more melancholy fare, including the new disc’s title track, “The Star’s Stand-In,” a song from an upcoming project paying tribute to actor/playwright Sam Shepard, and heartfelt single “The Day David Bowie Died,” which was actually composed on that day.

Haskins waited until the end of the set to give the crowd what it wanted – sort of. He skipped “I’ll Be Your Chauffeur,” his biggest solo hit, but dipped into his Love & Rockets catalog for the music biz commentary “Shelf Life” and set closer “Dog-End of a Day Gone By.” He encored with the lone Bauhaus song of the evening, but it wasn’t what fans expected.

Skipping “Bela Lugosi’s Dead,” for which he wrote the lyrics, he instead proffered an extra dramatic take on “Who Killed Mr. Moonlight,” one of his few lead vocals in the Bauhaus stockpile. Haskins closed the night with a spirited version of Brecht/Weill’s “Alabama Song,” written for the 1927 play Little Mahogany and a favorite of rockers from the Doors to Bowie.

Lyrics proclaiming, “We must find the next whiskey bar,” it proved perfect for last call on Red River.