Kristin Hayter on academia, catholicism & the complexity of violence

Lingua Ignota, making a Levitation appearance Friday at Empire, broke out in 2017 with All Bitches Die, a masterstroke of brutality and reprisal expounding on a justifiably vengeful concept: abusing your abuser. 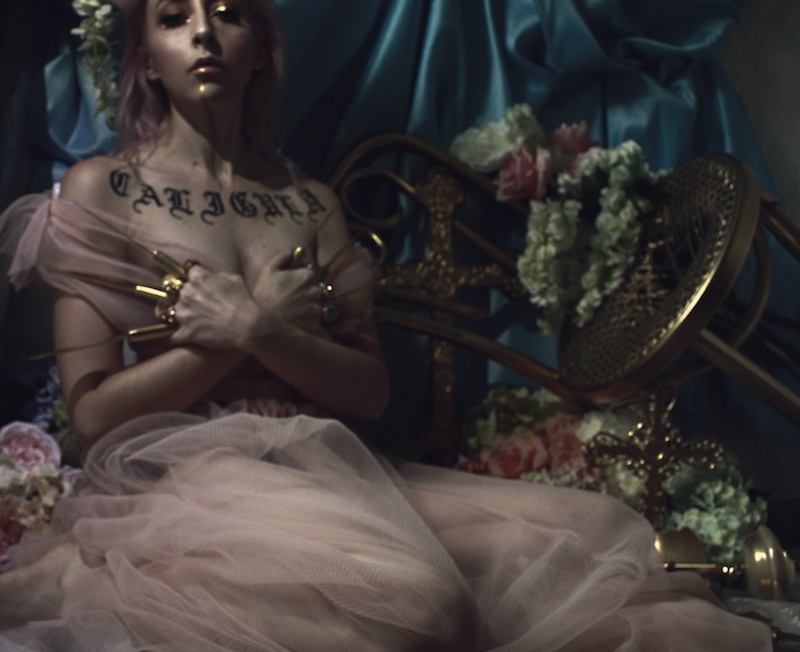 Lengthy movements entwine drone metal, power electronics, and classical music, while the LP includes tracks titled “Holy is the Name (of my ruthless axe)” and “Woe to All (on the day of my wrath”). You don’t need to speak English to feel the palpable rage emanating from composer/singer Kristin Hayter, an Ivy League-educated artist compelled to confront survivor violence as a voice-of-the-voiceless. She followed up her underground triumph in July with sophomore LP Caligula, issued by Canadian tastemakers Profound Lore.

Hayter, whose intense performances typically find the San Diego native on the floor of a venue tangled in construction lights, spoke on the phone with the Chronicle in advance of her Austin Terror Fest performance in June, which ultimately cancelled. That discussion – touching on higher education, the concept of violence, and her roots in classical music and metal – remains potent six months later.

Austin Chronicle: Have you had survivors reach out to you because they identify with All Bitches Die?

Kristin Hayter: I have had that happen quite a bit and it means a lot. It’s very moving and touching for me. I’ve had a lot of people share their own stories or share how the music in some way helped them process what they’d been through. I can’t think of anything else I could accomplish with my music that would feel more fulfilling.

AC: Did you see that coming?

KH: I had no idea. When I put out All Bitches Die, I didn’t think anyone would hear it. It was really just meant for hanging out in the Providence scene, so it was totally unexpected that anyone cared.

AC: You did graduate studies at Brown in Providence, Rhode Island, which is pretty prestigious. What were your experiences in academia?

KH: Academia was an interesting place to be a woman, particularly one making music. I know a lot of women of color who find it extremely frustrating to try to work in that world. When I first went to art school for undergrad, it was a way for me to think about how to make things. The way that I learned to think about art [at School of the Art Institute of Chicago] is still a big part of my practice today.

By the time I got to Brown, I think the work became too confrontational for academia and they didn’t like it very much. I actually wanted to get a Ph.D. and submitted some of the work that I did in graduate school and I didn’t get accepted anywhere. I heard the reason was it was too angry and confrontational.

AC: Is that in regard to your thesis, Burn Everything Trust No One Kill Yourself?

KH: Yeah. Parts of that and other work as well, but that was a main piece of the portfolio that went into applications for Ph.D.’s. So it didn’t go over very well, but that’s okay. I don’t know where I reside right now. It’s not academia and it’s not DIY anymore really, but it works okay right now.

AC: In my mind, when something’s working, that means you have creative freedom.

KH: I totally agree with that. At this point, I get to make things how I want to make them and I don’t have to worry if it sounds academic or not, or if it has a more cerebral angle, or if it’s not punk enough, or if it’s not heavy enough. Now, I’m doing my own thing with no structures or binding, so it feels good right now.

“In the future, I’m just interested in ensuring that the work remains genuine and that if it no longer feels necessary for me to talk about violence, or survivor violence, or domestic violence, or abuse, and there’s someone else better equipped to do that, then I’m not going to do it.”

AC: All Bitches Die centers around violence and retribution. Violence is something all humans have to wrestle with because our propensities for violence and non-violence are each extreme. What did you learn about it through your own self examination and what was that personal journey like for you?

KH: It’s a difficult question to answer, because I don’t want to sound like I’m condoning violence. But at times in my life, I was forced into violence or I became violent as a response to having violence inflicted on me. I learned that was the only way I could communicate with them as well.

There’s a certain self-loathing in being brought that low. I think that’s part of the record, but I also wanted to take it out of being a play-by-play of what happened to me, so instead I put it in a biblical, alogical context of absolute violence. That’s an easier way for me to talk about it and process it, and that makes it more relatable to a wider swath of people.

AC: What subjects do you want to address with your next release and thereafter?

KH: The next record looks at violence in a wider political context and largely focuses on invalidation and silencing. In the future, I’m just interested in ensuring that the work remains genuine and that if it no longer feels necessary for me to talk about violence, or survivor violence, or domestic violence, or abuse, and there’s someone else better equipped to do that, then I’m not going to do it. I’ll find some other thing that feels authentic to talk about.

I feel like it would be very gross to – using a terrible metaphor – beat a dead horse just because people expect me to. It has to come from a place that’s disgustingly raw and real for me for it to be effective.

AC: In what environment did you learn piano and singing techniques?

KH: I started out singing in church when I was about 8. I was in choir, then soloing, then leading the congregation in song. When my parents figured out I had an aptitude for singing, they started me on lessons for voice and piano. That was at around 10 or 11, and then I did that throughout my teens intending to go to conservatory and study opera.

AC: Is opera ever in English?

KH: It is occasionally, when it’s written by an English or American composer. Typically, that’s not considered the best language to write opera in. The most famous operas are Italian or French or German.

When I was a kid, I was really interested in languages. My specialty was singing in German, but I also sang in Italian, French, Russian, and Latin. These days, I have a strictly poetic understanding of French and Italian. I can only understand when people are talking about death or love or eternal flames.

AC: At what point in your life did you get into extreme music?

KH: Probably early high school. I started getting into grindcore and noise and punk. We had a reasonably healthy extreme music scene in San Diego when I was growing up here, bands like Cattle Decapitation and the Locust.

My classical music instructors would always try to match me with material that was appropriate for my voice and my age, and have me sing cute arias and flirty little parts for young girls. I was like, “Fuck that, I don’t want to sing this shit. I want to sing the slowest, saddest song.” So I eventually gravitated towards doom metal and drone.

“By the time I got to Brown, I think the work became too confrontational for academia and they didn’t like it very much. I actually wanted to get a Ph.D. and submitted some of the work that I did in graduate school and I didn’t get accepted anywhere.”

AC: It’s by no means a novel concept to combine classical elements with extreme music, but there’s a lot of different approaches to that. How do the ingredients come together for you?

KH: It’s a weird mess and I don’t know how it works. I don’t know how I successfully bring everything together, but I’ve always had really strange ways of putting things together. That was a big part of my practice when I went to art school.

I started working in text and sound. I would take preexisting works that were totally different and find ways to marry them. So, for instance, I took a piece of architectural writing from Le Corbusier and Bach’s Well-Tempered Clavier, then assigned each note to a word in the text and then made a new text out of the way that the language and music mapped together. So I’ve always been interested putting things that don’t make sense together and trying to figure out how they can be woven together.

I don’t think in terms of making a cool metal song. I think of the devices that metal uses. The same thing with noise. I don’t think, “I’m gonna make a power electronics thing.” I think about what happens in power electronics that I find effective as tools. I take that stuff and deconstruct it, and I think about classical music – what intervals do I like? – then put them back together in a weird or unexpected way.

AC: How influenced by Catholic mass is your vocal approach?

KH: Structurally, a lot of the music is influenced by Catholicism and liturgical settings, but I don’t know if the vocal style really is. I can’t really put a finger on what exactly I’m trying to get my voice to sound like, I just want it to sound like what the text needs to sound like at any particular moment. The long lines and melodic components I think are probably influenced by liturgical music.

AC: Are you still interested in church and Catholicism? Is that still something that’s a part of your life?

KH: I am interested in it. It’s gotten messy and weird, and I don’t have a great way to talk about it yet. I think the church is a super oppressive and terrible structure, and so much abuse has happened – especially within the Catholic Church. Christianity's contribution to oppression and colonialism is horrifying. At the same time, the fundamental values of those schools of thought are about being a good human… sometimes … Jesus!

I was raised in the church and I have a very strong relationship with its imagery, and the weird pageantry of a mass. I’m not even sure if I like it, but I’m obsessed with it.