The toxic treasure of Modern Trash

“This planet is garbage and so are we, so let’s have fun while it lasts,” announced Abhi the Nomad during the noontime hour on Saturday at the Tito’s tent, his debut ACL Fest performance. 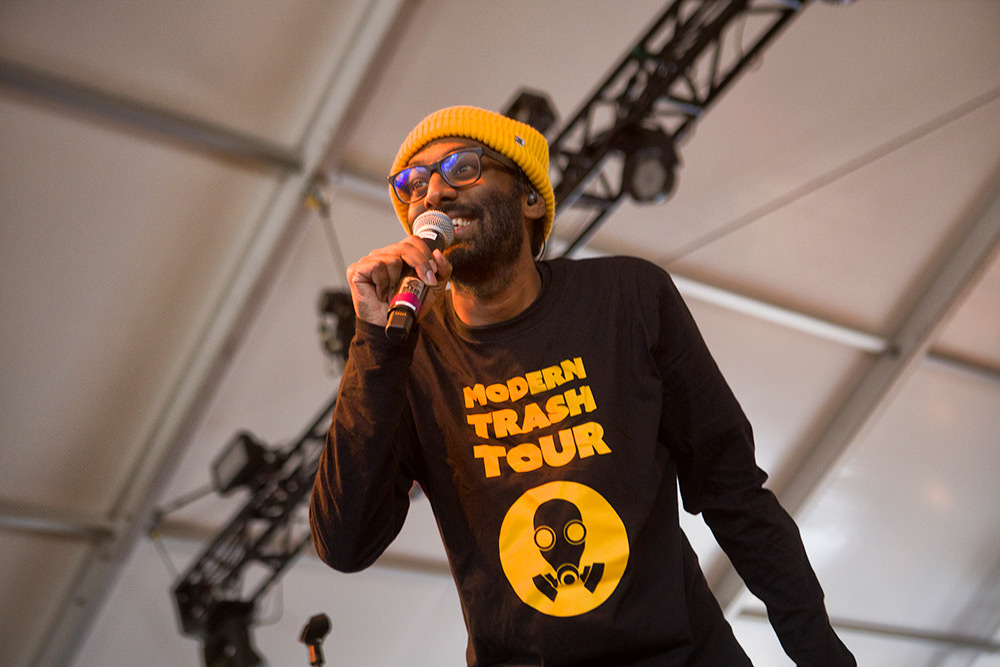 Launching with the staccato flow of “Dogs,” it proved a melodic breakdown – “Why is you pullin’ on my heartstrings?/ You playing me like guitar strings” – that got the affectionate hometown crowd howling. That cut peeled off Abhi’s Tommy Boy Records debut, 2018’s Marbled, which served as an intimate introduction to the clever lyricist. Modern Trash, in contrast, stands as a treatise on environmentalism, or more specifically, how humans are trashing Earth like it’s a cheap AirBnB.

The album’s catchiest and most profound track, the Harrison Sands feature “House of Clocks,” registered an early highlight, with many audience members having already memorized the hook: “God ain't gonna fix it/ He would've done it by now/ With all our, bad decisions/ We’ve probably run his ass out.” The chorus held its own against following fan favorite “Letter for God,” although the sonically varied Modern Trash leans less on the bouncy mix of songwriter-pop and hip-hop that highlights Marbled.

While the new release might be Abhi’s Greta Thunberg moment, it also features him serving up some ostentatious sexuality, including “BTFL” – assisted live by Foster Cazz – in which he raps about being “Bobby Flay on that pussy for the panel.” His disarming nature allows him to navigate such fare. Even when he’s trusting his pelvis, it hardly comes off as oversexed bravado.

A backing quartet, highlighted by the burning keyboard of Austin’s Dr. Joe, aided a live presentation that’s never sounded better. The moody, conceptual “Trashman” emerged as accidental closer once the stage manager waved the checkered flag with one song left on the setlist. Appropriate, really, for them to run out of time while performing a record about environmentalism.