Steven Ellison controlled Emo’s on Saturday night by flying the sold-out house through the space-time continuum. The Los Angeles producer known as Flying Lotus put on a three-dimensional joyride during the final stage of his Flamagra Tour, named for his sixth and most recent studio LP of computer-age wizardry. 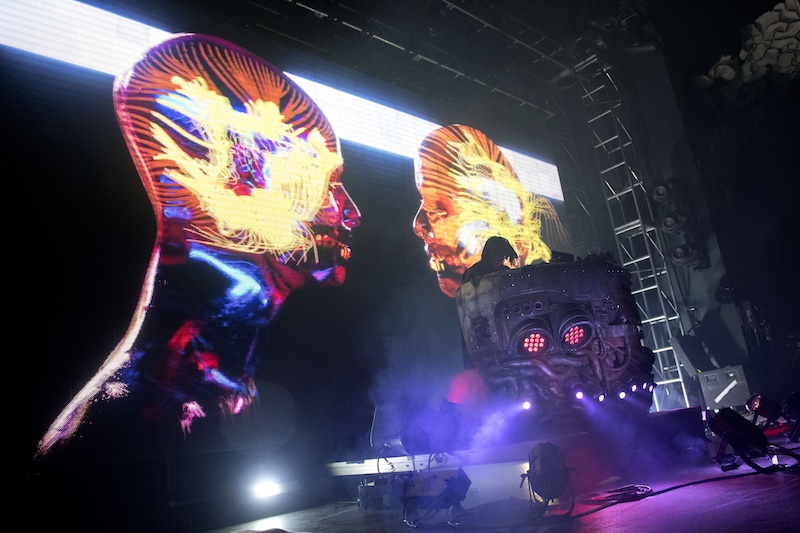 Before the Brainfeeder founder took the stage around 10:30pm, Brandon Coleman vowed to take the audience interstellar first. The Brainfeeder signee – sporting a NASA sweater and shiny Moog Liberation strapped over his left shoulder (aka “keytar”) – held everyone’s attention for nearly a half-hour. Aided by drummer Tech Dizzle and trumpeter Madd Galaxy, the L.A. product never let a note of futuristic synths and vocoder shouts slip by the wayside.

Notes swirled even during a tribute.

“One of the most space eventful keyboard players that I know, Mr. George fucking Duke, you better give him some fucking love right now,” Coleman demanded before covering “Journey to Love,” a Seventies jazz fusion by the late Duke and Stanley Clarke. 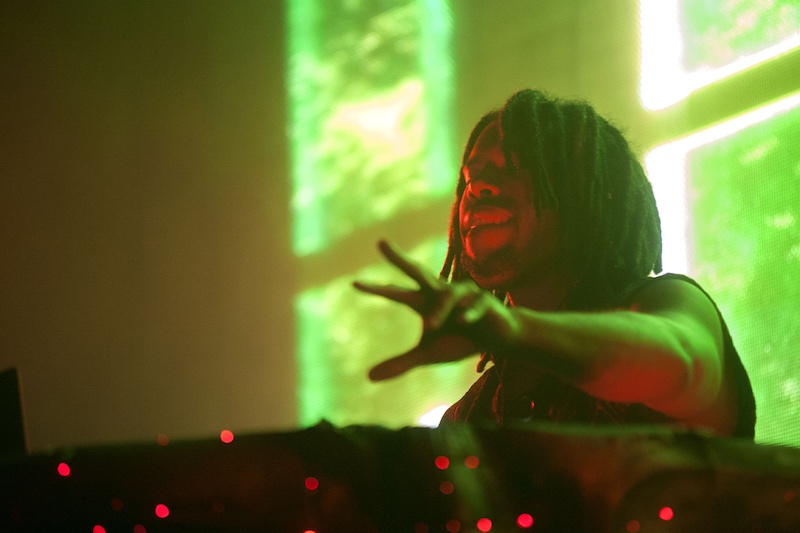 Flamagra marks the end of FlyLo’s five-year album drought, but the 35-year-old electronic hip-hop experimentalist continues to use his trademark 3-D stage setup, which he first debuted in 2012. A three-minute trailer preceded instruction to don the red glasses handed out at entry. An old man rambled at a child onscreen for two more minutes until a virtual firestorm consumed the inside of the dependable Riverside venue.

Fire represents a key theme of the headliner’s most recent output, 27 tracks that include “Heroes” sampling from Japanese multi-media manga series Dragon Ball. It’s therefore fair to say FlyLo went Super Saiyan 4 in Austin. For 80 minutes, the dreaded ringleader captivated some 1,700 attendees with nothing more than computerized sounds and a brain-rattling backdrop as minds traveled through colorful vortexes.

Galaxies of three-dimensional stars and zero-gravity fire emerged from behind the sonic shape-shifter who doubles as a filmmaker. Engulfed might be the best way to categorize the experience. Though Flamagra’s sci-fi owned the setlist, a few curveballs crossed the plate.

After rapping for a few minutes as his alter-ego Captain Murphy, the DJ returned to his fiery perch to add mean kick drums and ominous synths to Soulja Boy’s 2007 chart-topper “Crank That.” The Anderson Paak assisted “More” also received an update. Unlike the album version, its live rendition included a previously unreleased verse from the late Mac Miller.

That verse received its due crowd appreciation 53 weeks after the Pittsburgh rapper’s overdose death.

Despite not threatening IMAX’s stronghold on the 3-D movie industry, the effect’s usage properly immersed concertgoers. Thunderous drums shook the terrain, FlyLo swayed his hands, and lightning strikes resulted from both. Smoke billowed over the front section of the audience, mimicking a storm.

Yes, the entire gig is computer-generated orchestration. However, this didn’t feel like a DJ set or a rave. The Grammy-nominated Flying Lotus creates impeccable instrumentation and directed an orchestra of attentive appreciation.

FlyLo finally unfroze the flock he turned to stone when he brought out Coleman at the end of the show for his sole encore, an electro boogie that sent his followers dancing into the night. 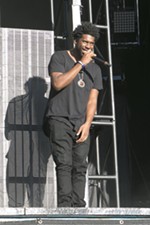