Ghost Wolves, the Austin twosome known for their eerie, blues-influenced garage punk with grindhouse themes, have joined the roster of Third Man Records. The Nashville indie label, founded by Jack White, issues a three-song 7-inch by the group today. 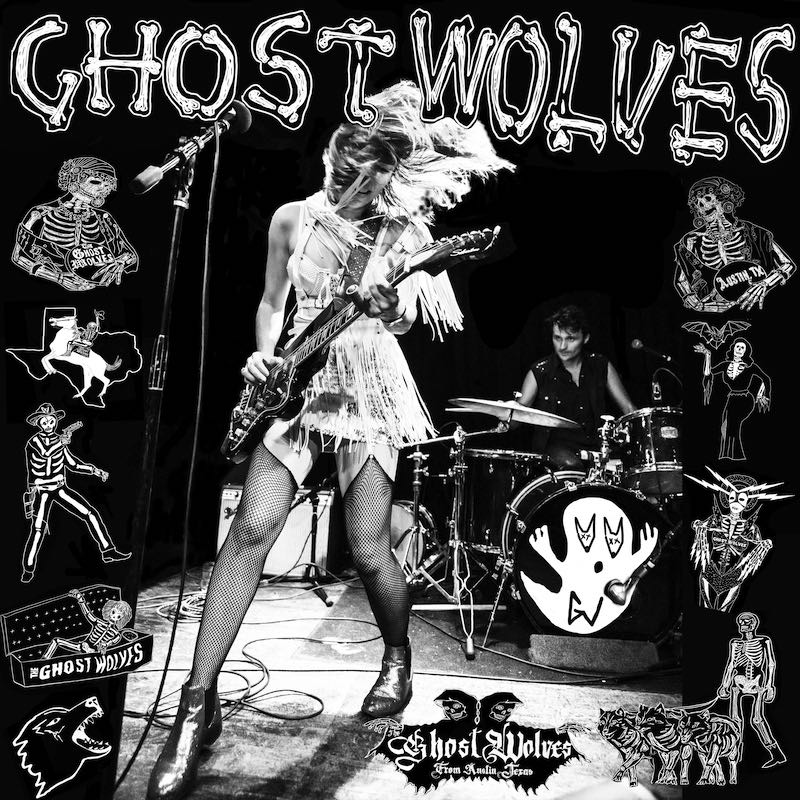 The TMR connection signals instant validation for the relentlessly touring wife-and-husband combo, highlighted by the uniquely accented delivery of Carley Wolf, who also handles electric and cigar box guitar duties. Jonny Wolf propels it all with an ice cold backbeat. The new single stands as one of Ghost Wolves most interesting recordings, one that’s more sonically detailed than anything they’ve put out, while still sounding properly raw.

The tracks pull from an early 2019 session helmed by John Michael Schoepf, bassist for Happen-Ins and Night Glitter, in his living room studio.

“We were working on half-inch tape and an 8-track Tascam recorder from the 1970s,” writes Jonny. “We made a point of having no computers or screens in the studio for maximum clarity and focus. We didn't want distractions. For us, it was just hanging out with John Mike, who's one of our best friends in the world, drinking lots of beer, and rolling tape into the night.”

The recordings, mixed by Schoepf, Jonas Wilson, and Kyle Ellison, are spacious, with bold use of effects and extraneous sounds that makes for a fascinating headphones listen. This trio of cuts, “Crooked Cop,” “Fist,” and “Day Will Follow Dawn,” were born in trying times, too. Jonny had been holed up in Connecticut at the bedside of his father, who has been diagnosed with terminal cancer.

“So we were creating with all of that hurt going on in the background,” explains Jonny. “It was therapeutic for me to be there with these people, working on art. And I think it came out on the record. It’s definitely darker and more intimate than our previous albums.”

The pair sent a batch of 10 songs to a number of labels and waited to hear back. Serendipitously, the one that bit is headed up by a rock star from another matrimonial guitar-and-drums duo.

“When Third Man called, we were popping champagne and screaming at the sky,” Carley remembers. “For us, it was like hitting the lotto. We're huge fans of the label. They have so many of our heroes in their catalogs, people like Muddy Waters, Wanda Jackson, Dead Weather, Jerry Lee [Lewis], the White Stripes.

“It’s mind blowing that our music will be there alongside them. It doesn’t feel real. It feels like a dream.”

Ghost Wolves now embark on a national tour, kicking off with a stop in Kansas City next week, with like-minded underground art-blues duo Freight Train Rabbit Killer and including a Sept. 19 date in Jack White’s hometown.

Get your hands on a vinyl copy of the new record here.