King Gizzard & the Lizard Wizard Is a Metal Band Now

Once underdogs, King Gizzard & the Lizard Wizard’s triumphant moment has arrived. The Aussie septet’s new album, Infest the Rats’ Nest, debuted at No. 64 on Billboard’s Top 200 Albums, their second charting LP since April. As such, the band’s world tour is largely sold-out. Wednesday’s show at Stubb’s followed suit. Stu Mackenzie, gripping an appropriate Gibson Explorer and clad in even more appropriate black jean shorts, struck a perfect practicing-riffs-in-my-bedroom power stance as the band lit into fresh cuts “Planet B” and “Mars for the Rich.” Weeks ago, when word came down that King Gizz had put out a metal record, many were skeptical. Yours truly was.

What emerged is a maniac, double-drum, sci-fi tinged blend of Eighties Metallica thrash and Motörhead hard rock. Legit, all right. Fun too – watching goofy, not-really-metal dudes play the material so joyously. That left the full house with nothing to do by grin from ear to ear.

The unstated musical ethic of KGATLW mulches too much of everything. They’ve got too many drummers, too many guitars, sometimes too many people playing solos at once, and they put out waaay too many albums. They even have someone playing maracas on a metal song. Astonishingly, it all works for them.

Last night, they mashed up the psychic tropicália of “The River” with 2016’s Nonagon Infinity standout “Wah Wah.” On the latter, the musical breaks hit like a stun-gun: vocals, three guitars, and Ambrose Kenny-Smith’s untamed harmonica ganging up on a riff. Ditto for “Road Train,” alternating between an Iron Maiden-like palm-mute gallup and a riff sonically equivalent to a cattle prod.

Joey Walker remains the unlikely best frontman in the band. By the time Mackenzie plopped down at his keyboard, Walker tossed aside his sweaty shirt and charismatically executed the staccato vocals on bouncy pop/rock tune “This Thing.” That, more or less, slotted into the boogie portion of the set, bookmarked by “Boogieman Sam” and a knock-out version of “Plastic Boogie,” both from April’s Fishing for Fishies.

Known for diving headfirst into specific styles – much like Ween once did – King Gizzard & the Lizard Wizard must be something of a musical education to their fan base. If so, it’s downright hilarious that they’re exposing 20-somethings to boogie rock, albeit through their gooey garage psych lens.

Before closing the 90-minute performance with “Am I in Heaven?” from 2015 gem I’m In Your Mind Fuzz, the group touched back on their new release with the thundering “Venusian 2” and “Self-Immolate.” With that, it became clear that metal material is now the best sounding style they touch on live.

In actuality, it’s another wrinkle to a restlessly genre-explorative band that started out like Thee Oh Sees acolytes. Regardless, no one will put out a better garage-psych-thrash album in 2019. If the black crown fits, wear it. 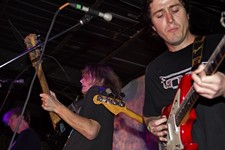