Choir at the Cactus Helps Shy Singers Find Their Voice 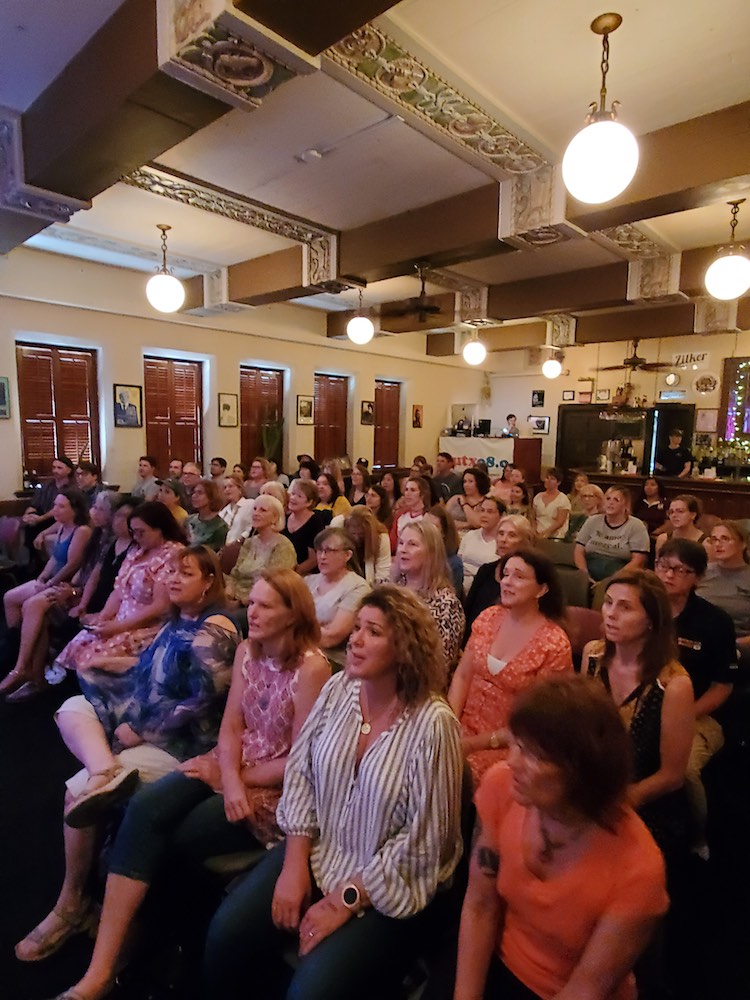 The Choir at the Cactus crowd rehearses "Good Vibrations." (photo by Kevin Bolling)

I, like countless other undercover divas, suffer from an all-too-common affliction: a deeply rooted sense of shame. This is an instinct has served me quite well and averted no small number of public humiliations. But Julie Blake, the founder and host of the new monthly community choir event Choir at the Cactus, is mindful of how harmful it can be to repress one’s singing voice.

“Singing is a direct expression of who we really are, and so it feels really vulnerable and people are terrified of the thought of being judged and laughed at,” Blake says. Giving into that fear, she says, can “shut down your life.”

A vocal coach who readily admits that she was not born with natural singing talent, Blake founded Austin’s Rock It Choir in 2018 after coming across a similar model in the UK and falling in love with its community-minded, low-stakes style. In the past year, the Rock It Choir has staged flash mobs and hosted a Queen singalong. Now Choir at the Cactus, co-run by musical director Heath Allyn in partnership with KUTX 98.9, is all about debunking the myth that singing should be frightening, or humiliating, or reserved for those with talent. “Everyone can sing – come amaze yourself!” declares the program’s website.

The first Choir at the Cactus was held in July, and ended with a rousing performance of “Hey Jude.” I attended the second, on August 17, which was advertised as an opportunity to learn a mystery Beach Boys song in three-part harmony. I wrangled a friend (who had somehow never heard a Beach Boys song in her life) into accompanying me, and showed up on a Saturday afternoon, ready to have my life changed.

Choir at the Cactus is based on Australia’s Pub Choir, which pairs brews with group singing lessons. The Australian program became a phenomenon in the last couple years and often draws celebrity musical guests. A portion of their ticket sales are donated to charity, and according to Blake, the Pub Choir sells thousands of tickets for sold-out events every month.

“I was like, Wow. Now this is an epic model where we can really create money for music nonprofits here in Austin,” Blake says. 50% of Choir at the Cactus ticket proceeds go to local music nonprofits like the Health Alliance for Austin Musicians.

Packed into the small venue I found a lively group of would-be rockstars, ranging from young kids to bashful adults white-knuckling beers. Blake and Allyn took the stage and led us in a series of goofy vocal exercises that were nominally intended to improve our technique but succeeded more directly in allowing me to settle into the idea of making a fool of myself while surrounded by strangers. One of these exercises was a complex task that involved approximating rising scales with our vibrating lips while sinking into a low bow at every high note. This officially terminated my relationship with any lingering sense of human dignity I might have been clinging to, but it also helped us determine whether we were a soprano, an alto, or a bass. Since I had failed to hit the highest notes (and all the other notes as well, but that was apparently less relevant), I sat in the middle of the room with the alto section.

Blake unveiled the song we’d be learning: "Good Vibrations." “Nice,” I thought. “I know this one. This will be fine.” Then we were asked to sing along with the Beach Boys as best as we could, karaoke-style – and Reader, I did not know "Good Vibrations" as well as I thought I did. I spent the duration of the lesson experimenting with an eclectic range of notes in hopes of landing on the correct one, with limited success. Blake insisted that it didn’t matter – at the beginning of the lesson we were told that the only thing we could do wrong was not sing.

“I didn’t sing for many years because I wasn’t born with natural singing talent, and I bought into the myth that either born with ‘it’ or you’re not,” Blake says. “Turns out singing is like learning any sport or art – it takes the right coach, training, and devoted practice.”

We barely made it through learning the entire song in two hours, and our finale performance was much louder than it was accurate. But all things considered, we didn’t sound terrible. And the combination of a little alcohol and a lot of singing transformed the mood of the room – the triumphant last note was met with cheering, hugs, and the sort of general merriment that I wouldn’t ordinarily associate with humiliation. Blake and Allyn are still ironing out the kinks in their process, but a project like Choir at the Cactus is never going to be especially invested in perfection at the expense of a good time. Blake tells me she hopes to turn Choir at the Cactus into a phenomenon like the Australian Pub Choir, and as I find myself still singing “Good Vibrations” to myself days later, it’s not difficult to believe.

The next Choir at the Cactus is Sept. 14, and participants will learn a mystery Elton John song.