Into the Wolf’s Mouth with Orange Goblin Frontman Ben Ward 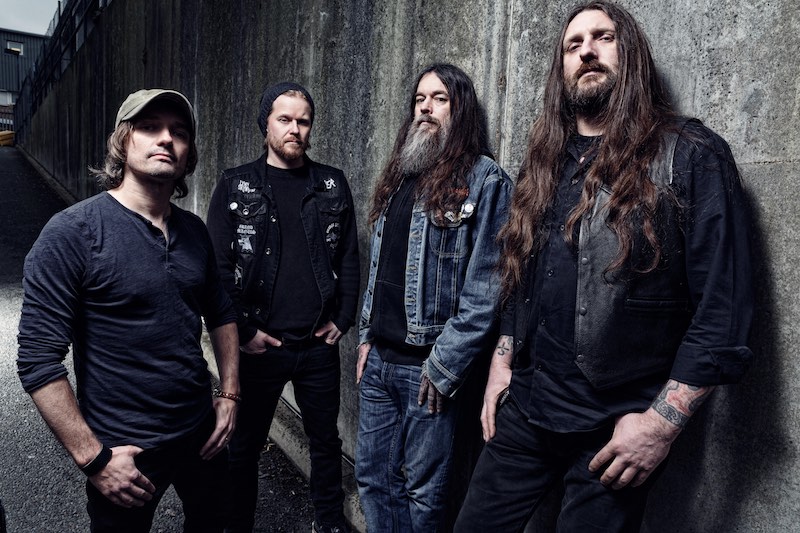 Austin Chronicle: What do you recall of the band’s first performance here, and if not that, then what about notable Austin anecdotes? To what extent did Texas hold any mythos for Orange Goblin?

Ben Ward: We were discussing this just yesterday and worked out that it’s now 17 years since our first U.S. tour, which we did in 2002 with Alabama Thunderpussy. My memories of Texas are that it was very hot and the shows were always great, especially in the likes of Austin and Dallas. That first tour we did a show in El Paso, which was attended by more scorpions than people, but it was a great adventure!

In 2013, we did our first SXSW in Austin, which involved two shows in different venues. One of them was an outdoor show for a Converse event and another was headlining the Tone Deaf showcase at Red 7. The shows were good and we’ve made a lot of friends in the Austin area, people like [Jeff] Pinkus from Butthole Surfers/Melvins, the guys from Honky, Scorpion Child, Duel, and many more.

“The wolf is a symbol of both beauty and ferocity, so it’s an amazing image when related to music and especially hard rock or heavy metal.”

AC: The core four of the band – yourself, guitarist Joe Hoare, bassist Martyn Millard, and drummer Chris Turner – have remained together over the course of nine albums and 25 years. What’s been the secret and how would you describe that chemistry?

BW: We’re more like brothers than bandmates and we all know when each other needs time alone or a comforting arm around them. We also have a sense of humor, which you need to survive as long as we have. The band has always been our release and we get together on weekends to write or perform music that we love, so it’s always been great fun.

If you lose that element of fun, then what’s the point? We have been through a lot of hard times together, but that just makes the bond stronger and we have no plans of stopping any time soon.

AC: Last year’s The Wolf Bites Back remains unrelentingly fantastic. What were some of the personal and creative factors that aligned on this album to produce such peak work right down to the artwork?

BW: We’re very proud of the record and put five years worth of hard work into writing and recording it. There were a lot of changes in our personal circumstances since the previous record and there was a feeling of determination to come back stronger, hence the album title. We may be getting older, but there’s still fight and fire in our bellies, and I think that comes across in the music and the lyrics.

Once we started writing, we knew we wanted to work with Jaime Gomez Arellano to produce the album. We’d known him for a while and were fans of his work, and he achieved everything we wanted in the studio. As for the artwork, we wanted to keep it simple and our good friend Roland Scriver came up with the cover. Instantly, we knew that’s what we wanted.

AC: For some reason, the cover of the album reminded me a bit of a famous Austinite recently passed: Roky Erickson. What sort of familiarity did/does the band have with his legacy and that of the 13th Floor Elevators?

BW: I hadn’t really considered the similarity myself, but we are huge fans of Roky and his work with 13th Floor Elevators, and all his other bands since those early days. Personally, I’d say The Evil One would be in my Top 10 albums of all time and we were genuinely saddened when Roky passed. Fortunately, my wife and I got to see him perform live in London a few years back and he was incredible!

“We are huge fans of Roky and his work with 13th Floor Elevators, and all his other bands since those early days ... And we were genuinely saddened when [he] passed.”

AC: Likewise, Wolf track “Sword of Fire” reminded me of Game of Thrones. Is that something the band was into? What about Blue Öyster Cult? Where’s the intersection of Orange Goblin and hard rock occultism?

BW: “Swords of Fire” is actually based on martial arts and the reining of the mind as a weapon, rather than fantasy or occult, but I can see why you would make that connection. I am a huge BÖC fan and have always loved that they have a really subtle approach to their mystery and occultism that was never overplayed or as obvious as other bands. BÖC always kept you guessing about the meaning behind songs and I like to do that a bit with my lyrics too.

AC: The breakdown in that song’s album mate, “Ghosts of the Primitive” – just the guitar and drums – is pretty sweet. You can audibly hear that the band enjoys playing together. What’s the instrumental dynamic in OG?

BW: You’d really need to ask the other guys about that as I just sing, but I realize they do have a special chemistry together that is born out of playing together for 25 years. A song like “Ghosts of the Primitive” really shouldn’t work on a metal album, but I love that there’s a unique ‘Orange Goblin’ feel to that song that fits the mood and style of the album.

AC: “In Bocca Al Lupo” [Into the wolf’s mouth] and the title of the album – when and where did the wolf theme emerge during the creative cycle of this LP?

BW: The wolf is a symbol of both beauty and ferocity, so it’s an amazing image when related to music and especially hard rock or heavy metal. A lot of bands have used the wolf as a symbol of either a lone hunter or a gang that hunts in packs. The wolf is a survivor and a natural predator, so I’ve always been intrigued in them and the imagery fit with what we were trying to portray on this record. Joe wrote and named “In Bocca Al Lupo,” which is a good luck saying in Italian theatre, like, “Break A Leg” in the UK.

AC: Brexit might have dominated world headlines more if not for Trump. How would you compare the state of the U.S. to that of the UK these days?

BW: We aren’t really a political band and I prefer to keep my thoughts and politics to myself, but obviously with recent events surrounding our drummer’s Visa application [and denial] for this U.S. tour we have been frustrated with the process. That said, we’re not about to start blaming specific individuals as it’s a problem that has been steadily getting harder to solve for a long time now. Both the U.S. and the UK have always had political issues that divide opinion and they always will.

As musicians and entertainers, I don’t think the general public really need to hear our take on things as everyone is different and free to think what they want. As our drummer recently posted, Orange Goblin aren’t “for” politics. Orange Goblin is “for” Black Sabbath and Motörhead.