Age quantifies the duration of time a person’s defied their inevitable fate. Legends, however, don’t die. New York icons Mary J. Blige and Nasir Jones, both pushing 50, demonstrated their ageless greatness and respect for one another Saturday night at Circuit of the Americas during a stop on the hitmakers’ co-headlining Royalty Tour. 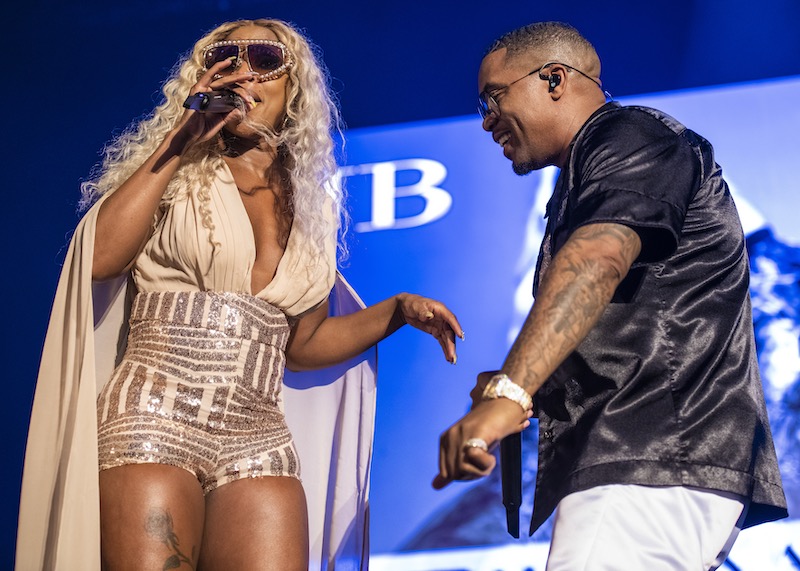 Mary J. Blige and Nas at Circuit of the Americas, 8.3.19 (Photo by David Brendan Hall)

At 8:30pm sharp, the nonstop, two-and-a-half-hour performance commenced with the cinematic drop of a red curtain and subsequent reveal of a single screen with promotional signage. Even with each singer’s coat of arms hop-scotching the stage backdrop just above the live band’s heads – bass, drums, keyboards, DJ – the simple staging for two deities capable of captivating thousands telegraphed a down-to-business vibe. A video underlining the importance of the co-billing prompted the two out into the Austin dusk.

“[This shows] how far we’ve come with our fans,” proclaimed the Bronx-born Mary Jane Blige, 48, recipient of the Lifetime Achievement Award at the 2019 BET Awards. “We’re both celebrating the 25th anniversary of one of our most important albums. His is Illmatic, mine is My Life. It was just a no-brainer.”

“Touring with Mary J. Blige is an honor,” reciprocated 45-year-old rapper Nas. “When you’re dealing with hip-hop, dealing with R&B, Mary is the person who took it on her back and made it happen. Mixed it all up and gave it to us in a way we never saw before.”

The queen and king then rose on a black platform to deliver “Thriving,” a collaborative single from May. “Look what I did, I made history/ They don’t know what to do with me,” sings the modern R&B matriarch over a thumping drum pattern as one of hip-hop’s greatest MCs claims he only operates on “royal time” and will overcome negative energy. Though the former’s lip sync appeared rather obvious, the two ageless virtuosos soon relegated that minor misstep an afterthought.

Prologue established, Blige exited, ceding the stage and band for 45 minutes to Queensbridge’s most notable poet. The Brooklyn native and son of jazz guitarist Olu Dara jogged through a score of classics, ranging from the tremendous storytelling of Illmatic standout “N.Y. State of Mind” to the salacious, appetizing identity of “Oochie Wally.” By set’s end, black shirt glued to his body in sweat (a mild 90 degrees greeted show time), Nas’ flawless transitions kept the full, uncovered amphitheater engaged.

Without skipping a beat and with only the slightest changes to the live band set up – notably the addition of backup singers – Blige re-took the stage exactly three minutes after Nas disappeared into the wings. For the next 80 minutes, MJB reminded anyone who dared second guess her ability exactly what she’s capable of. Vibrant pyrotechnics and dancers accompanied the eternally thriving singer, but at the heart of her show, the singer stood alone center stage and sang her heart out – over and over and over.

Sporting a glistening blue dress, the second of four outfits worn during the show, and leather boots going well above her knees, the 1992 breakout danced with splendid rhythm. Raucous chants of “go Mary!” promptly rang out in unison. Commemorating her second studio album took the forefront of the matter, which led to scarily accurate, almost electronic renditions of youthful Nineties smashes like “I’m Goin’ Down.”

The singer’s voice cut through the night with little effort, and in the second half of her show – past the early part’s choreography and select instances of non-live vocals – she absolutely wore out the microphone during songs full of woe. MJB rang far louder than a Formula One car scorching COTA’s pavement. Nas reappeared for a verse on “Love Is All You Need,” and the pair walked off to his rapping and her high-stepping over instrumental “Family Affair,” but by that juncture, the evening had become an MJB affair. 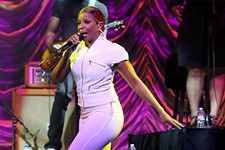