Lucy Dacus’ debut Austin City Limits taping on Tuesday night happened suddenly, like most aspects of her career ascent thus far. She opened the set solo, gazing shyly out into the modest crowd before sighing, “So, tonight’s not what we expected it to be.” 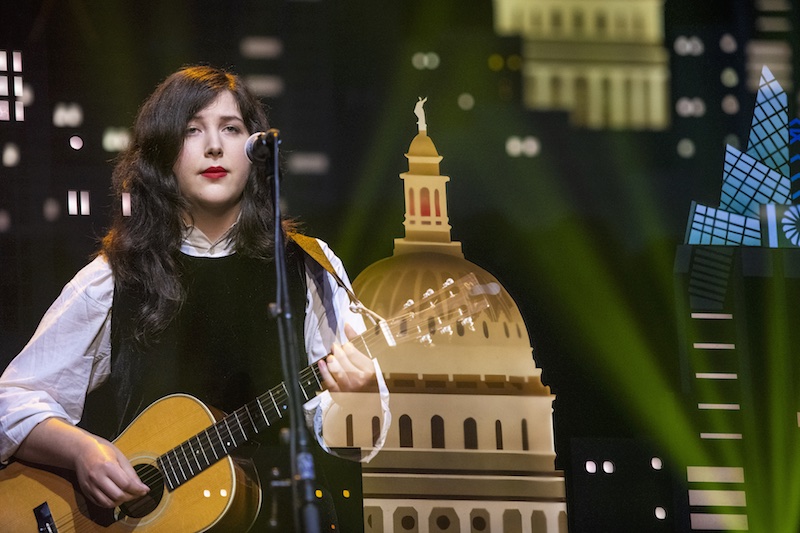 The evening had been billed as a split taping with Matador Records labelmate and friend Julien Baker, whose cavernous, hymn-like songwriting offers a sharp contrast to the warmth of Dacus’ sonics. Baker’s cancellation hours before doors opened at ACL Live dashed the hopes in those present of hearing the two perform material from newer supergroup Boygenius, made up of Dacus, Baker, and Phoebe Bridgers. Abruptly left with full ownership of her first appearance on the PBS live concert staple, the 24-year-old songwriter from Richmond, VA., delivered.

And made it look easy.

Fresh off a weekend performance at the storied Newport Folk Festival, Dacus opened her 10-song set with the mellowed poetics of “Trust,” an acoustic song she penned at 16 and the quiet moment of her breakout debut, 2016’s No Burden.

Joined by a backing threepiece adhering to an all black and white dress code, the quartet then launched into the rollicking “Addictions” from last year’s critical darling Historian, prompting singalongs from the audience. Eschewing the horn and string arrangements flushing out the LP’s ornate sound, the band skewed true blue indie rock, complete with their own aluminum water bottles plastered in stickers on the Moody stage. They swung back into earlier work with the sultry “Green Eyes, Red Face,” Dacus’ voice dipping into soulful territory, followed by U.S. politics lament “Yours & Mine,” featuring stand-out guitar work from Jacob Blizard.

The singer’s extraordinary vocals still seem to slip out of her effortlessly, a textured, velveteen croon evoking a world-weary sigh. It’s the warm crackling of a radio, a sardonic sense of humor, and a fresh, personal wound all at once. Little has changed since her 2016 ACL Fest debut, an early afternoon set on the tiny BMI Stage.

Last night, her timeless singing anchored the TV taping, filling the role of immediate and old friend amongst a changing set list. Strikingly raw lyrics take a moment to land, gutpunches coated in honeyed tones. So swung the show’s high point, emotive new standalone single “My Mother and I,” with its crushing opening: “My mother hates her body,” after which she paused, then, “We share the same outline.”

Whip smart sincerity acts as another through line in her songwriting, self-aware without ever even skirting self-indulgent. Take the heartbroken, wailing, heavy hitter “Night Shift” – another standout Downtown – wherein Dacus hurls the meta line, “In five years, I hope the songs feel like covers.”

2016 breakout “I Don’t Wanna Be Funny Anymore” still held up as the closest to a barnburner in her catalog, a radio-friendly hit song pushed by a driving guitar line. She noted Austin was one of the first cities where she played it. As a performer, though, Dacus rarely “rocks out.”

Instead, she delivered her songs with seriousness, radiating a subdued tenacity. The guitarist-vocalist remained slightly bashful on the Moody stage, calmly delivering a flawless set with quiet confidence.

“I’ve been intimidated by this day,” she admitted after “Historians,” again solo onstage before launching a final song, then smiled at the audience, “but I’ve been buoyed by kind spirits.”

After the unreleased “Fool’s Gold” closed the set, the crowd got to its feet and called for an encore they didn’t get. The talent had churned through her most beloved tracks already, but you couldn’t blame the audience for trying. Lucy Dacus makes it easy to forget she only counts two albums to her name. 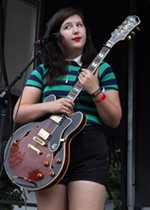