As such, venue staff sequestered the large audience in both the Garage and inside the Control Room – where Denver’s Dreadnought had just slammed home blackened prog – to avoid anyone becoming a lightning rod. With the Garage door closed, the outside stage capacity hit its limit quickly, leaving those indoors anxious to see a band that had never played in Austin. For 15 minutes, confusion reigned.

Happily, by 8pm, the weather lost enough force to allow a precious few more into the Garage from the Control Room, at which time Panopticon himself, Austin Lunn, announced they’d be doing two shows: one for the audience in front of them, and one later for the folks who were shut out. That established, the lights went out save for a lone spotlight on the center of the stage – never mind that Lunn stood stage left, with rhythm guitarist Jake Quitschreiber manning the middle – and went straight into “Snow Burdened Branches,” the epic closing track of the group’s masterpiece, The Scars of Man On the Once Nameless Wilderness, Pt. 1.

As statements of purpose go, there’s few better: dissonant yet melodic, dirty yet majestic, with a preference for rock & roll groove over blast beats. It’s as near-perfect an example of modern black metal as could be imagined. For the rest of the half-hour set, the Kentucky quintet maintained that standard.

“Living in the Valley of the Shadow of Death” employed prog rock grandeur for its uplift, while “Into the North Woods,” from Scars’ immediate predecessor Autumn Eternal, stripped down to a brutal chug. The performance closed with Autumn’s “A Superior Lament,” which alternated a melancholy shimmer with a power metal lope. That house brought down.

Weather cleared, the Garage doors opened, and French blackgaze pioneers Alcest commanded the stage only five minutes later than their stated start time. Given the crowd’s enthusiastic response to opener “Kodama,” title track to the group’s most recent album (2014), this was one of the most anticipated sets of the festival. The quartet’s signature blend of shoegaze tonalities, black metal dynamics, and minor chord melodies proved irresistible to an audience of black t-shirts and horns throwers.

Bandleader Stéphane Paut (aka Neige) and his co-guitarist/singer Pierre Corson (stage name Zero) eschew blackened vokills at this point, though the former indulged in “Je suis d’ailleurs,” so the arrangements incorporate metallic moves more subtly than at the band’s start. The crowd didn’t mind at all, going wild at the first arpeggio of the mournful, decidedly non-metal “Souvenirs d’un autre monde,” and hailing the jangly, dreamy, sentimental closer “Délivrance.” Clearly, most headbangers are just tenderhearted softies.

Outside stage thus closed down, action shifted back inside for a numbing hour with Chicago instro-doom stoners Bongripper. Panopticon finally took the stage after them – around midnight – and lit into their second set to a much smaller but no less excited gathering. Crisper sound gave the band extra punch, making the brutality more brutal and the prettiness more pronounced. The band repeated “Snow Burdened Branches” and “Into the North Woods” from hours earlier, but then veered away from the previous setlist immediately afterward with Scars thrasher “Sheep in Wolves Clothing.”

Lunn and company closed with back-to-back anthems from 2014’s majestic Roads to the North: progressive rock epic “Capricious Miles” and the roaring burner “Sigh of Summer,” both part of the “The Long Road” trilogy. One show combining all the songs might have been preferable, but it’s doubtful anyone walked away from this divided conquest unsatisfied. 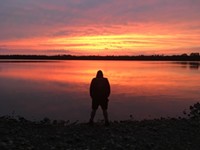 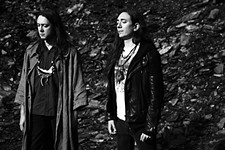 French Black Gaze Band Alcest Explores Past Lives at Austin Terror Fest
“Religious people are sure about what they believe, whereas spiritual people never know”