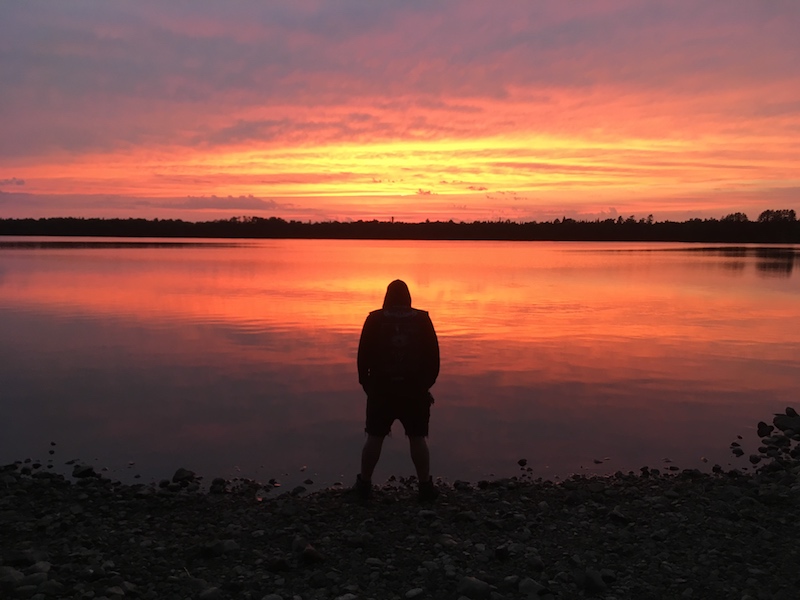 Lunn’s range extends to his subject matter, which delves into far more political territory than most BM acts ever dare explore. Last year’s The Scars of Man on the Once Nameless Wilderness, a double album unleashing one disc of progressive extreme metal and the other descending into dark folk, stands as a prime example. Its lyrics take humanity to task for its careless treatment of the natural world that Lunn loves.

While Lunn unpacks songs from Scars at ATF with his live fivepiece, he’ll also go solo for an afternoon acoustic set that revolves around the work of Texas singer-songwriter legend Blaze Foley, an influence that seems surprising at first blush, but makes sense when one considers Lunn’s affinity for folk music and his commitment to honest self-expression in music.

Austin Chronicle: Congratulations on The Scars of Man on the Once Nameless Wilderness. It’s a double album and since you release music as essentially a one-man-band, was a project this massive more difficult than previous album?

Austin Lunn: Yes, this record was a very difficult undertaking. Writing the songs took a long time – especially the folk side of things. Some of those songs are many years old and I had been playing various versions of them for several years, either at home with friends and family, or at various acoustic gigs back in Kentucky. I wrote “Cowering (At the Foot of the Mountain)” in a tiny, one-room cabin I lived in with my wife when we lived in Norway for a little while back in 2011.

So many of those songs have been worked on for several years, so it was a bit intimidating finally committing them to wax. The recording process was long and arduous, but also at the time of the mixing, my youngest son, Rune, had a major heart surgery and we were in the hospital with him for a month and a half. While he slept at night, I would stay awake to watch over him and review mixes with my headphones on.

It was a pretty grueling time, and the album will always be associated with that in my mind.

“I have been a Blaze Foley fan for nearly a decade. I found his music through my love of Townes Van Zandt, Steve Earle, and Guy Clark. I love that whole scene.”

AC: So much black metal seems intended to shock just for the sake of it. Your music digs deeper than that and has something to say. Do you think the general metal audience – as opposed to the specific Panopticon audience – understands your subjects? Does it matter?

AL: Panopticon will always be an ideological band. As I grow and change as a person, the subject matter of the band will continue to develop and change as I do. I started the band when I was 24 and I am 36 now, so there’s been a lot of change in perspective over the years. I am one of those people who sees the personal as political, and generally all music is an expression of the human experience in one way or another.

AC: You draw a lot of inspiration from man’s effect on the natural world, which is particularly apt now as we struggle with climate change. Scars addresses that effect most directly. Which came first for you in creating this album, the musical ideas or the thematic ones?

AL: Typically, I like to write in concepts and more often than not, that concept reflects a time in my life where I am wrestling with a certain issue. I use the album as a way to process what I am feeling and kind of put that issue to rest – to work my way through any struggle or cognitive dissonance I have about the subject matter. The record I am writing for now deals with personal struggles I have had in my life, and my hope is that when the album is done and I hold it in my hands that I can move past that issue.

AC: You’re obviously well-versed in folk and roots music. What’s the connection between folk and black metal for you? Is there any cognitive dissonance when you go from black metal to bluegrass and back?

AL: Generally, I just like to incorporate my interests in the music I am working on. I love a really broad range of music, and am a very, very avid and obsessive record collector. So my interests usually rear their heads in one way or another in my work. I try to keep an open and honest mind when I am writing and block out fears of what people will think. It’s really hard to write from the heart when you’re preoccupied with what reviews will say or what sales will reflect.

Sincerity is paramount to me in the writing process, so I have a tendency to disconnect from the “scene” in that regard. I love folk and roots music, in particular songwriters. I love the window into someone’s mind and heart it provides. I guess I am just doing my best to have my music reflect that, consequences be damned.

AC: Do you ever get pushback from fans who think you should stick to one lane?

AL: Of course I do. You’re not going to make everyone happy. But there’s lots of better bands they could be listening to than Panopticon, so if they want one particular style, I am sure there will be a band putting out a record that does it better than I do, and they will enjoy that album. I make music to deal with my issues – so you don’t read about me in the news, if you get my meaning. Music is a sanity keeper for me, and as a person I am kinda all over the place, a bit of a mess. I makes sense that my music would be too.

AC: As a one-man-band in the studio, how easy or difficult is it to translate the music you made yourself to a band of other musicians for shows?

AL: It’s been pretty hard, because when I write I am not typically thinking about how it would translate live, especially considering that I haven’t been performing live with Panopticon for very long. I am very fortunate to have wonderful friends that are far better musicians than I am in the band.

“I am one of those people who sees the personal as political, and generally all music is an expression of the human experience in one way or another.”

Jake Quitschreiber is a phenomenal guitar player and performer, and his input in our live performance is invaluable. Andy Klockow is a great bass player and vocalist. He’s been so integral in the arrangements and solidifying things. Without him, I think we'd just fall apart.

Ray Capizzo... I don’t even know where to start. His commitment and drumming skill is something I am just in awe of. I love watching him play, and it’s a pleasure to be in a band with him. And Tanner Anderson. That guy is a true musical treasure. His work with Obsequiae is absolutely insane, and having him in the band on keys and vocals has been an amazing addition.

I love these guys and there isn’t anyone else I’d rather play these songs with live. They are so patient and understanding, and on top of that I enjoy my time with all of them so much. It’s been a wonderful experience for me and I hope for them too.

AC: How did you find Blaze Foley and his music? What draws you to him?

AL: I have been a Blaze Foley fan for nearly a decade. I found his music through my love of Townes Van Zandt, Steve Earle, and Guy Clark. I love that whole scene. Blaze’s story and his lyrical approach and personality really resonates with me. I love the levity and sorrow in his work – the sense of humor and sentimentality he evokes.

He was such a special songwriter, great finger-picker, and he had such a tender, lonesome voice. His voice is so warm but sad. I will always, to quote Gurf Morlix, “Think about the music you might have made.” If Blaze had lived, what would he have done? There’s such a bittersweetness to Blaze’s story.

Years ago, I got a tattoo of Blaze on the back of my arm. Just as a reminder to keep coming from the heart – to not waste my life, to live my music and have my music reflect my life. I am happy to see Blaze’s beautiful songs being enjoyed by more and more people.