Amid a recording session for their latest album, Austin’s Little Mazarn had a visitation: a peculiar-looking moth posted up on the door. Singer and banjoist Lindsey Verrill identified the insect on a moth enthusiast website, which advised her, of all things, to tickle its back with something soft.

When she produced a feather and did as instructed, the moth opened its forewings to reveal a yellow underside with distinct blue and red spots that looked like eyeballs. This is the defining characteristic of an Io moth, pronounced “eye-oh.”

“The coolest thing is that the Io moth doesn’t look like that in the wild,” contemplates Verrill. “You have to interact with it to get it to reveal its spots. I thought that was poetic.”

Inspired, Little Mazarn’s new release – out Friday on the homegrown Self Sabotage label – will be titled Io. The eight-track sophomore effort finds the ambient folk outfit peaking in several regards. Most notably, Verrill’s unassuming vocals have reached a singular level of purity.

Meanwhile, her spacious compositions with co-bandleader and veteran multi-instrumentalist Jeff Johnston are conveyed with a heightened clarity from the group’s 2017 eponymous debut and feel effectively personal. Verrill penned the lion’s share of the material, aside from a cover of underground troubadour Country Willie Edwards’ “Marfa Lights” and a spare reinterpretation of Bruce Springsteen’s “Dancing in the Dark” that rides the singer’s reverb-steeped banjo. Ultimately, the group that – on first blush – might appear to be an old-timey Appalachian act continues to thrive with a masterly sense of atmosphere.

Standout track “Vermont” finds Verrill intoning a series of reflective lyrical vignettes based on lives from throughout the land over a percolating banjo line and the whistling sound of Johnston’s bowed saw. An irresistible chorus jumps with a rush of bass and cello as Verrill, vocally assisted by Will Johnson (Centro-matic, Monsters of Folk) and frequent collaborator Kendra Kinsey, sings, “You can’t stay everywhere you leave a piece of your heart.” The song makes its streaming debut there: 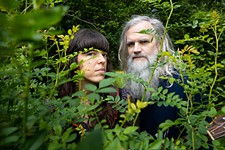