As the lead freak of Eighties industrial noise, heavy metal, and electronic dance brutalizers Ministry, Al Jourgensen promised an “acoustic version of a song that is timeless and important” before launching his second encore Friday night at Fair Market with “Every Day Is Halloween.” 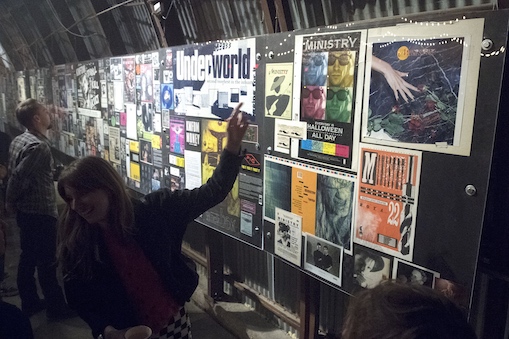 Posters at Industrial Accident: The Story of Wax Trax! Records at Fair Market on April 19, 2019 (Photo by John Anderson)

Jourgensen boasts about a dozen metal piercings in his eyebrows, three more in his nose and lips, and face tattoos you can’t blame on Post Malone because Jourgensen tatted first. His deep dive on the 25-year-old ballad about an abused outsider ready to fight back wrapped an uncaged set following the screening of a new documentary, Industrial Accident: The Story of Wax Trax! Records.

Co-produced by Julia Nash, the film traces her father, Jim Nash, and her partner, Dannie Flescher, and their Seventies love child: a record store and label that coalesced a community of like-minded musical aesthetes, American misfits, and a micro LGBTQ community. Julia’s mother, Jeanne Paynne, remained close to Jim even after he left her for Flescher and manned the merch booth, and Julia welcomed Wax Trax! fans to the fray “because we’re like family,” she said.

Born in Denver and relocated to Chicago in the late Seventies, Wax Trax! hosted and sold imports from then-new European bands including Bauhaus and Cabaret Voltaire before launching a label with dark but danceable experimental music from Ministry, Thrill Kill Kult, Revolting Cocks, Throbbing Gristle, and other acts now called “Eighties industrial.”

“Wax Trax! always had a really good market in the Bible Belt,” says label employee Matt Adell in the movie. “It seemed the more conservative the small town you were in, the more you needed a Revolting Cocks record.”

Industrial Accident revives savage Wax Trax! music with reams of live footage, photos, and commentary from Jourgensen, Flescher, Nash, Thrill Kill Kult’s Groovie Mann, and Ministry/Revco lieutenant Paul Barker. The latter three sat with last night’s local audience of at least 300 to discuss the film post-screening. Though no longer with Ministry, Barker mused that “industrial, as it related to dance music, probably came about because of Wax Trax!,” while Steve Albini appears in the doc praising initial Wax Trax! punk act Strike Under because “it owned up to the fact that in Chicago, punks would go to dance clubs and dance.”

L.A. post-punk and synth-pop rousers Cold Cave followed the screening and discussion by proving the far reach of the Eighties synth/dance movement and the place that ferocious, gloomy music holds in the minds of acolytes across generations expressing their shadows.

Jourgensen then sing-barked his lyrical sermon, gently pantomiming. “Thieves” was a song about gun control, he said, as his five-man backup banged war drums and shredded through 90 minutes. Gibby Haynes showed up in voice and spirit for “Jesus Built My Hotrod,” and Jourgensen reminded that Ozzy himself pronounced Ministry’s “Supernaut” cover “bloody-well better” than the original, encoring the Greatest Fits tune after the Revolting Cocks’ “No Devotion.”