The Summit on Race in America: Motown at 60

Detroit pop icons continue in the name of love

On the five-year anniversary of the Obamas’ visit to the LBJ Auditorium for a Civil Rights Summit, three pillars of the Motown Records cathedral spread the equality of love during a panel at the presidential complex on Wednesday night. In conjunction with the Grammy Museum, the LBJ Library opens an exhibit this week celebrating Motown’s 60th anniversary. 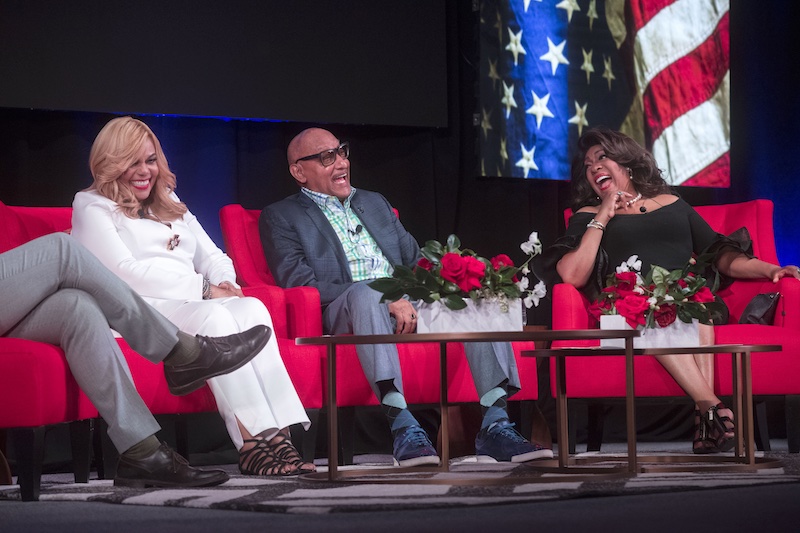 You Really Got a Hold on Me: (l-r) Grammy Museum executive director and moderator Bob Santelli (legs only), Claudette Robinson, Duke Fakir, and Mary Wilson on the “Motown: Sixty Years of ‘Hitsville USA’ panel for the Summit on Race in America at the LBJ School of Public Affairs on April 10. (Photo by John Anderson)

Mary Wilson, founding member of the mother of all so-called girl groups, the Supremes, flaunted her ageless ballad abilities first. The Mississippi native and Detroit music pioneer, 75, grabbed a mic during her introduction to sing a snippet of No. 1 1965 smash “Stop! In the Name of Love.”

The 63-minute panel featured an array of stories about the formation of each speaker’s group and their respective experiences with Motown founder Berry Gordy Jr. Pride and joy lit up the faces of each icon, although the typically truthful Wilson still expressed discontent with the “terrible” contract she admittedly didn’t read due to youthful exuberance.

“What [most inner-cities] didn’t have was a Berry Gordy, and he built, little-by-little, a wonderful little seed that he planted into the ground and built into a global flower,” offered Fakir, the last surviving original member of the Four Tops.

As part of the Miracles, the first recording act signed to Motown, Robinson met Gordy when nothing more than Detroit dreaming represented his vision.

“Many times he had to pawn his suits just to have enough money to record us,” revealed Robinson. “Unbeknownst to a lot of people, he was not a rich guy. He was just an ordinary guy who was trying.”

Motown played a crucial role in integrating popular music at the outset of the Sixties, as evidenced by the label’s stronghold on the Billboard pop charts throughout the decade and continuing into the Seventies and Eighties. Early on, industry music charts were primarily segregated by race. The Supremes alone managed 14 No. 1 singles.

Soon, the panel – taking place during the LBJ Foundation’s Summit on Race in America – soon reverted back to the need to come together as a nation.

Wilson, teary-eyed by panel’s end before an 85% capacity crowd, expressed gratitude about her ability to play a role in helping others act in the name of love. Fakir said he recently talked to Universal Music Group in hopes of creating new, unifying music akin to that of the Four Tops’ 1966 chart topper “Reach Out I’ll Be There.” He hasn’t recorded new music in over 40 years.

Question is, how much has really changed since then?

READ MORE
More The Summit on Race in America

The Summit on Race in America: Songwriters in the Round Panel Recap
Multiple generations of black artists push for music in schools