Open 1993-1998, the Electric Lounge enjoyed an outsized impact on Austin music, nurturing the early careers of Spoon, Fastball, and Graham Reynolds. Shinyribs leader Kevin Russell held down a Tuesday night residency with his band the Gourds, who he’ll pay tribute to Saturday at 3ten ACL Live for a 20-year Electric Lounge reunion extravaganza. 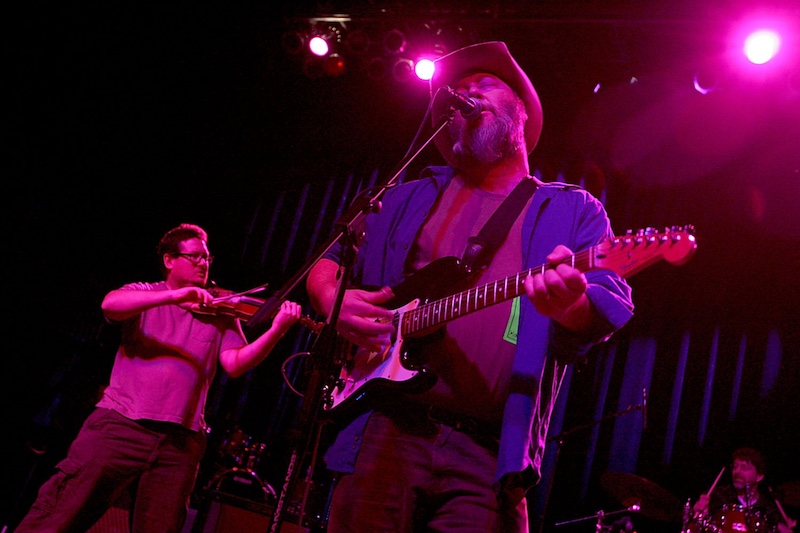 Kevin Russell leading the Gourds in 2010 (Photo by Gary Miller)

Russell and the Gourds refined their sound and built their audience on their way to international stardom at the Electric Lounge. Joined by Gourds/Shinyribs drummer Keith Langford, Shinyribs bassist Jeff Brown, and Poor J Brown multi-instrumentalist Matt Morgan, Russell will deliver an all-Gourds set this weekend.

Austin Chronicle: Do you remember the first time you played the Electric Lounge?

Kevin Russell: I wanna say it was 1995 – the Austin Acoustic Music Festival. Some things are blurry, but in my mind, that was when we played KUT as part of a promotion. We went straight from KUT and played. I remember thinking, “This place is way too big for us. We shouldn’t be playing giant clubs like this [laughs].” But that got us in the door. Then we started playing Tuesdays.

We did a residency for a long time. We’d follow the Blue Plate Poets. That was how we met Wammo. During their set, we would drink and wait for them to get done. We were being a little loud one night and Wammo got really mad at me. He goes, “Hey! Do you mind? We’re reading fucking poetry up here!” [Laughs] I was like, “Oh, is that what you call it?” That’s how we met, and became fast friends after I apologized.

I remember one night, Bob Mould came to see us. I’m a huge, huge fan. He was one of my heroes. He walked in, listened for maybe three seconds, then walked out [laughs]. I was like, “Wow, OK. That makes sense. This is really not Bob Mould-style music.”

A great memory I have is opening for Lucinda Williams. I wanna say it was ’96, ’97. It was a packed house, and that really helped solidify us locally with an audience and a lot of fans. That made us inroads into Dallas and Houston, and other Texas cities came from the promoters that were there to see Lucinda. They’d never heard us before.

I remember one night smoking cigars in the green room for some stupid reason [laughs]. There were like 10 of us in there, in that little tiny room, which was basically a broom closet. I think we were playing with Kelly Willis. We were good friends with her. She was so pissed off at us. “Do you fucking mind?” I never heard her cuss before, but she cussed that night [laughs].

AC: It was really eclectic. You had the poetry slams, Salvage Vanguard Theater, Hamell on Trial.

KR: It’s kind of a forgotten era, except for us. That’s what’s cool about this reunion. I saw some people on the Facebook page commenting on the reunion, like the Horsies. “Horsies? Who’s that?” C’mon! Who are you? You don’t belong at this reunion if you don’t remember the Horsies [laughs].

The Ed Hamell shows were legendary. That’s really where Ed became who he is now. We met him at Chicago House when he first got to town. We were called the Grackles. Ed was there and Jimmy LaFave, and Beaver [Nelson]. Ed had a long ponytail, and he was bald, so he wore a rhinestone yarmulke at the time. It wasn’t long after he met us that he shaved his head like we had our heads shaved. Then he found his way into that [Electric Lounge] scene, and he filled that room with his guitar. I feel like he evolved that there at the Lounge.

I remember seeing Alex Chilton there one night. It was a tent outside during South by Southwest, one of those cold South By nights. That was an incredible show! Hardly anybody was there. He was completely baked out of his head, just making it up. I don’t know if he played a whole song! It was a 30- or 40-minute set, and he just sort of noodled his way through it. But it was great – highly entertaining.

I saw Vic Chesnutt there a couple of times. Guys like that, who were sort of that mid-level indie world, it was a place for them to play in Austin. That was a great thing, too: all the roadshows that came through there that maybe you wouldn’t have gotten to see. It really filled a need in this market. When it was gone, it was a little dodgy for a while there. There weren’t as many venues in Austin, or that kind of music venue.

There were those weird little shows in the back lounge area, too – those acoustic shows in the middle of the week. Mike Nicolai used to preside over those quite a bit. That’s where we forged a friendship with him. The Gourds did stuff with him a lot.

It was more of a community center – that kind of performance arts space. All kind of things booked there. It had a lot to do with those guys that ran it. They were aware of and valued performance stuff of all kinds. They saw the connection. I think that’s what they had in mind, what they were trying to create there, and they did for a moment.

The stage and the space was just the right size. I think Mike Henry’s involvement with Blue Plate helped bring that element in. He saw it as a perfect thing. There really weren’t too many spaces at that time that would pull that off, or even be open to doing that.

I know there were some dark things that went on there. It didn’t really want to know about any of it. I was kind of like Jovita’s. I mean, it wasn’t as bad as Jovita’s, obviously [laughs]. But ultimately, I have a really positive memory of the place and my experiences there.

I hated for it to close. It was always hanging on by a thread. You think about the way that area was back then. There were all kind of weird things happening around those train tracks. It was a sketchy area at the time.

Then Whole Foods moved in, Book People built that building there. GSD&M moved down there from Bee Caves. Everybody decided to move back into town after the white-flight Eighties, when downtown was crumbling, and everything was for sale and for rent.

So that was kind of the end of it, but man, we had a great few years there. Great shows, great times. I’m glad I got to experience it.