The Summit on Race in America: Songwriters in the Round Panel Recap

Multiple generations of black artists push for music in schools 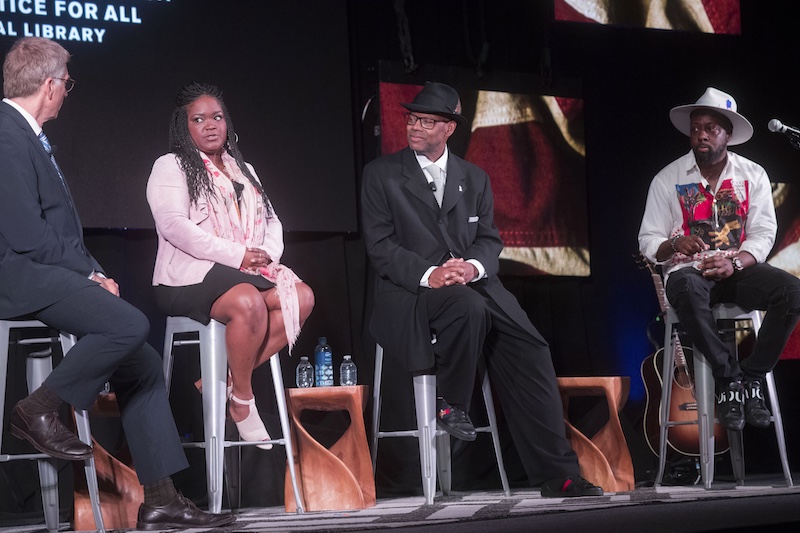 After Hi School: (l-r) moderator Bob Santelli with Shemekia Copeland, Jimmy Jam, and Wyclef Jean on the Songwriters in the Round panel for the Summit on Race in America at the LBJ Library on April 9, 2019 (Photo by John Anderson)

That junction? Music’s ability to relate and educate. The panel focused on the sound arts’ role as incubator of change and agent for racial progress, and proved a highlight of the event’s second afternoon, which included both music and comedy components in the greater dialogue. Today’s final day deep dives into politics and social issues.

Finding fame and acclaim during the early Eighties as a Prince protégé in Morris Day & the Time, then teaming with bandmate Terry Lewis in a songwriting/production team that landed 41 songs in the America Top 10, Jam refrains from telling people what to do. According to him, however, musicians need to respect and appreciate the platform given to them because music is the divine art.

Singer Copeland, 40 today and daughter of Texas blues guitar great Johnny Copeland (1937-1977), offered that she tries to channel the history of black plight by addressing modern issues such as social injustice, date rape, and domestic violence in her songs. The Harlem-born great ofttimes calls on her own experiences in some instances.

As a Haitian immigrant who arrived in America at the age of 9, Jean offered a unique perspective. According to him, music must be used as a weapon to break certain racial and societal barriers.

“By the time I’m 12 years old, I can’t speak English, so I can’t tell the difference between Pink Floyd, Police Synchronicity, Run DMC, and Bob Marley,” said Jean, 49. “It all just sounds like good music to me. I think the responsibility is that we have to instill the truth about music to kids at a very young age.”

With many public schools, especially schools in poor neighborhoods, excising their music programs, all three panelists – who spoke for 45 minutes to a full room – asserted the need to reverse that trend. Jean stressed that a bigger presence is needed in the nation’s capital.

“You know how much money is used for the military? Just give me one fraction of that,” he said.

READ MORE
More The Summit on Race in America

The Summit on Race in America: Motown at 60
Detroit pop icons continue in the name of love