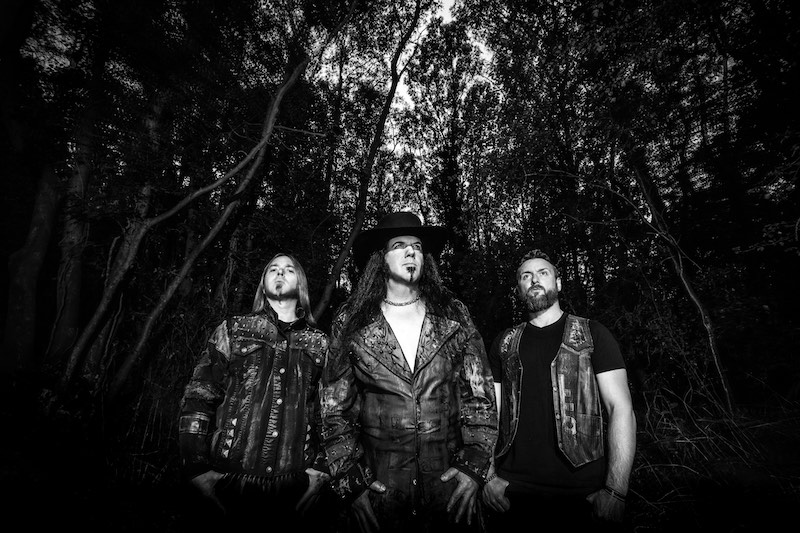 Larynx expulsion behind Morbid Angel’s pioneering trio of death metal standard-bearers – Altars of Madness (1989), Blessed Are the Sick (1991), and Covenant (1993) – the group’s former singer, Vincent, met Norwegian axe wielder “Blasphemer” Eriksen while the latter anchored ground zero black metallers Mayhem from 1994-2008. Discussions ensued over the decades until lightning storm French percussionist Mounier signed on and Vltimas came to life. The Carolina-reared Vincent explains the moniker: “The ‘V’ is actually a Roman ‘U,’ and the best way to describe the name is we put two English words together: ultimate and mass.”

Something Wicked Marches In begins with Vincent’s bearish bawl, hints of an Italian horror film beginning the opening title track. Shards of Scandinavian paganism stab the riff pileup that is “Monolilith,” while the Norse god majesty of “Last Ones Alive Win Nothing” proves a tolling doom beacon. Needlepoint guitars, jackhammer hooks, and occult vox reel in another highlight in “Everlasting.”

Equally important, an accessibility of sound – Vincent’s clear delivery set against what the local terms Erickson’s “dissonant, melodic, and ambient approach to extreme metal guitar” – means the trio’s bow isn’t simply a roaring splat of extreme volume. There’s a separation of sonics that also allows headbangers to skate by on being death metal scholars where base appreciation of the album is concerned.

“Our goal was to create extreme music that is also intelligible,” offered Vincent. “We also selected a producer who is big on organic-sounding and -feeling productions. There’s a lot of diversity on this album for sure.”

Credit Jaime Gomez Arellano (Cathedral, Ghost, Paradise Lost) for the clarity of Something Wicked Marches In, but again, don’t discount the project’s demo location or Vincent’s fondness for it.

“The geographical challenges of putting a band together wherein each member lives in a different country are very real,” he acknowledges. “It turned out the greater Austin area suited our ‘together time’ best from a logistical standpoint. Rune and Flo both told me they really love Texas – as I do – so I’m pleased that we were able to have a relaxed environment to create [in].

“I honestly wouldn’t trade [living here] for anything,” continues the outlaw country lover. “My only possible regret is that I didn’t get here sooner. My 20-plus years in Florida were surely productive, but alas, when it came time for a change I’m thankful I decided to be right here!”

And as for the track of the hour, here’s some insight:

“‘Monolilith’ is a very moody track indeed. As it was coming together musically, my mind was racing with regards to creating a big Wagnerian chorus that would cascade and uplift the sense of majesty I felt. Apart from tweaking the arrangement a bit for the chorus, I kept my ideas under wraps until the day it was recorded. No one had any idea what I was going to do with it until it was done.

“It took some time to build the choral harmonies and decide on the appropriate note choice. Hearing the finished result when it all came together it was so worth it. I make the effort to be well-prepared for studio sessions, but I always leave as much room as possible to be spontaneous and give credence to the emotions of the moment.

“We each have our well-seasoned ‘areas of expertise,’ if you will, and I’m so proud of my team mates for giving their all to the entire project.”