Hi, How Are You Day: Wayne Coyne Austin Chronicle: Congrats on your wedding!

Wayne Coyne: I was at Starbucks this morning, just a normal, tired adult in there getting coffee. I had five or six people that I didn’t know very enthusiastically come up and congratulate me. I didn’t realize what a great sort of bonding experience marriage is. It’s something everybody can relate to, so thank you.

AC: You’re not on tour right now, so what made you want to play Hi, How Are You Day?

WC: In the last 10 years, we’re never really on tour, and really never off tour. It’s always evolving and getting better and more expressive. In the same way a painter would want to work on a painting every day, I get to work on the Flaming Lips all the time. That’s as performance, arranging songs, and doing things like the light show, which really does make it special and unique and entertaining.

With this Daniel Johnston event, the people who approached me had a cool idea about what it could be. I felt like they could probably get some other cool artists involved if I jumped on, and they did. Daniel’s music is of the Flaming Lips’ time, and Yo La Tengo and Built to Spill. We’re all in that stuff together. It’s safe to say they’ve done a good job of [the event] being represented by the right people.

AC: How were you first exposed to Daniel Johnston’s music?

WC: We knew about him right as his very initial tapes were coming out. Now, he’s in that category of, if you ate at a restaurant and he was sitting in the corner, you’d go, “Oh my god, look at this weird old guy. That’s Daniel Johnston!”

When one of my movies was playing on the same bill at South by Southwest as [The Devil and Daniel Johnston], it seemed very normal that I’d be sitting in the audience watching my own movie. Then, suddenly we all turned around and said, “Oh fuck, Daniel Johnston’s actually here.” He’s such a reclusive weirdo, to really see him in person is just not that common.

AC: You’ve always been one to reference Daniel Johnston as a great artist. In the Eighties, what about his music knocked you out and made you feel that way?

WC: I don’t think he and I are very much alike in our daily lives, but there’s definitely some absolutely pure, emotional thing that happens in his songs. It really is a man crumbling and crying right in front of you. Any musician that hears that, you’re shaken to the core.

“True Love Will Find You in the End” seems like just a hokey little song, but when he does it, it really is devastating. When making music, part of you wants to be a childlike character that isn’t thinking about, “Is this cool?” or “Is this going to work?” With [Johnston], there’s elements of being pure, emotional, and real that are just uncanny.

AC: Have you and Daniel ever tried collaborating?

WC: If we were invited to [collaborate with Daniel], we would have jumped at it. But it never seemed like Daniel would have much fun if I made him do something. With any collaborations, I gauge, like, “They’re going to have to be stuck with me telling them what to do. How good and how bad is this going to go?”

Especially [Johnston’s] first cassettes tapes, they’re just powerful, great songs, but they have this other quality that is absolutely him. We’ve done a lot of Beatles songs as well over the years, and we would say the same thing about John Lennon. Like, any singer can kind of inhabit a Paul McCartney song and it’s going to work. It’s just built out of melodies and these very likable changes.

But with Daniel and John Lennon, there’s something they’re doing that you can’t do. It’s not something you can learn. Maybe it’s not even something that Daniel can do – something that happens when he’s about to die and then he makes music instead of killing himself. I don’t know. It’s some sort of cathartic magic.

AC: In the Eighties, when the Flaming Lips came to Austin, would Daniel be present?

WC: We would never be anywhere that he was. Before the documentary and the internet, I don’t think any of us really knew if the madness was an act or what. That fascinated us as well. It wasn’t controlled, and that’s part of all mystique and self-made characters.

That’s throughout all kinds of music, but especially in Austin. In the same way that San Francisco does, Austin seems to have attracted more weirdos than some other cities have.

AC: You’ve talked a lot about loving Roky Erickson and Daniel. Do you feel like Austin has an attraction for you because of them?

WC: I don’t really feel like I’m like those guys. I’m not a weirdo or damaged. My life isn’t bizarre and tragic in that way. I’m just a normal guy who has been lucky enough to make lots and lots of records, and nobody has come in and stopped me. I don’t feel like I’m in that sort of category, but maybe they don’t either. Maybe I am and I don’t realize it.

I’m very lucky that I can do music and do art and then also have a great, great life. I want to work hard. It’s not a quirk. It’s not a personality thing. But I understand the allure of the broken genius that could be like a Daniel or a Roky Erickson. 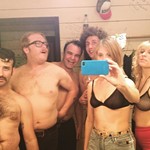 Sweet Spirit Tour Diary
On the road with Spoon