Not Enough HAAM to Go Around

Patronage sought after funds run out for free musician insurance

Last Thursday, just a week after the start of open enrollment, funding ran out for the Health Alliance for Austin Musicians program, offering free health insurance to local musicians. 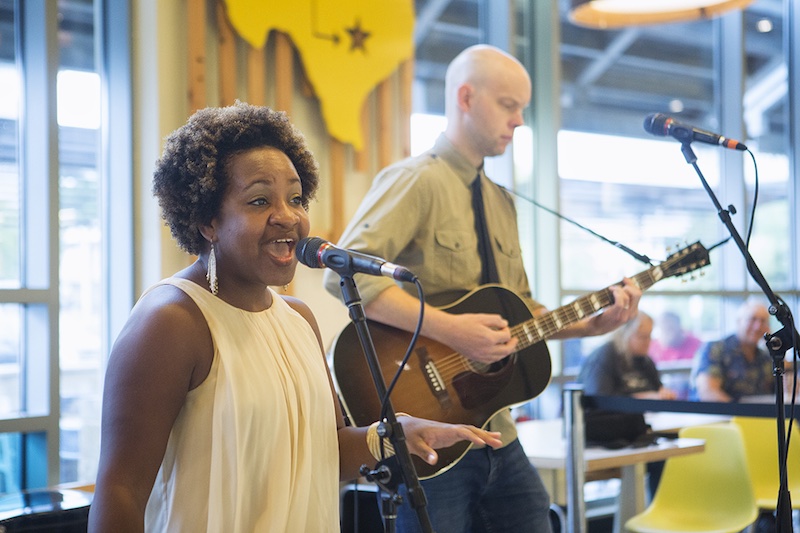 The first week kicked off with record enrollment numbers for the organization. Funding for HAAM’s premium assistance plan, which covers the complete monthly cost of insurance for qualified musician applicants, had emptied in previous years prior to the end of open enrollment. Rising insurance premiums and general decreases in the local nonprofit’s funding exhausted this year’s plan faster than ever before.

“It was not a surprise,” says Rachel Blair, the chief operating officer for HAAM. “We messaged heavily to our members encouraging them to come in early. This year it’s a smaller pot, and we just don’t have enough money to go around.”

Founded in 2005, the healthcare provider has experienced yearly growth. It counted 2,700 musicians as members this past year, a more than 20% increase from 2017. Local musicians can still apply to become a HAAM member before the end of open enrollment on Dec. 15.

Outside of premium assistance, belonging to HAAM includes access to dental, vision, hearing, and wellness services. Additionally, the organization can help members find the best affordable insurance plan for their situation and navigate those services throughout the year. By visiting the Foundation Communities offices in North Austin, where enrollment is currently held, musicians can also be placed on a waiting list for the premium assistance insurance plan.

Currently, the nonprofit has launched a Facebook fundraising campaign to tap emergency community support before to the end of open enrollment.

“We want musicians to know that we have their back,” Blair adds. “Don’t get discouraged, and come in to meet with people at HAAM. We’re going to pull out all the stops to help them as much as we possibly can.”

Acceptance to the plan will continue to cut off each year until new donors and healthcare partners help the nonprofit fill a $4 million yearly gap in funding.

In addition to fundraising, the premium assistance plan is also supported by a partnership with Seton Healthcare Family. Blair says acceptance to the plan will continue to cut off each year until new donors and healthcare partners help the nonprofit fill a $4 million yearly gap in funding.

Leslie Sisson of local indie group Moving Panoramas arrived at HAAM enrollment just hours after the premium assistance plan had been exhausted. The singer-songwriter-guitarist has utilized HAAM’s no-cost insurance over her past eight years of performing in Austin.

“It wasn’t until I sat down in my car that it started hitting me, ‘Oh man, this is bad,’” she recalls. “There were musicians [waiting] that I recognized. If it’s only a week into it, how many people are going to be affected by this?”

After having a “mild panic attack,” Sisson later returned to enroll in another plan, which will cost her $120 each month.

Sisson works as a freelance editor for television. She says the availability of local work in her field limits her from getting a full-time job with benefits. The one-time Chronicle cover subject has also found potential employers distracted by her public status as a bandleader.

The frontwoman credits HAAM with helping her find specialists and schedule appointments for an unforgiving series of autoimmune issues over the last year. She’s having surgery next week, in fact. These navigation services will still be available to her in 2019.

“I think I’m a broken record saying HAAM keeps me alive and keeps me in Austin,” says Sisson, who’s supported the nonprofit through various benefit concerts and public testimonies.

She worries that another surgery could cost thousands more next year when her current HAAM premium coverage is over. As for the unexpected new costs, she admits, “I don’t know if I can quite budget them in at the moment, but I’ll figure it out. I can put it on a credit card.”

“We hustle every year for every dollar that we give to our musicians, and we really, really depend on people’s generosity. The time to dig deep is now.” – Rachel Blair, HAAM

Last week, Emily Whetstone became a HAAM member for the first time. The singer for rising rock group Van Mary responded to warnings of low funds by coming in on the first day of open enrollment. The organization added over 100 people that Thursday, and Whetstone had to wait at the offices for almost nine hours.

“Even though it took all day, we were all just happy to be getting health insurance,” she says. “It’s like gold. Without HAAM, I probably would have to get an office job. That’s what I did before. I was a medical assistant and I didn’t get to play guitar for months.”

Performing music in Austin for a year now, Whetstone works two part-time service industry gigs. The restaurant she works at offers insurance for full-time employees, but it’s hard for her to make the weekly hour requirements with band practice, recording, and the possibility of touring. The separate jobs allow her the flexibility to play multiple shows weekly.

Back in July 2017, HAAM Executive Director Reenie Collins presented concerns over “an imminent possibility of closing to new membership” to the Austin Music Commission. Blair says these struggles surprise people due to the nonprofit’s prominent local presence, with annual fundraising events like HAAM Day.

“I think because the community perceives HAAM to be very successful, sometimes we’re victims of our own success,” Blair says. “We hustle every year for every dollar that we give to our musicians, and we really, really depend on people’s generosity. The time to dig deep is now.”

Be True to Your School
Members of Growl, Little Lo, and Mother Falcon navigate UT