Odesza are a couple of knob twisters, and they know how boring that is to watch. Thus, Harrison Mills and Clayton Knight didn’t just dance around like bass music maniacs in their skinny jeans on Friday night. They came girded by three giant screens overflowing with morphing shapes of alien lands, crystals, and other geometric designs in spectacular colors. 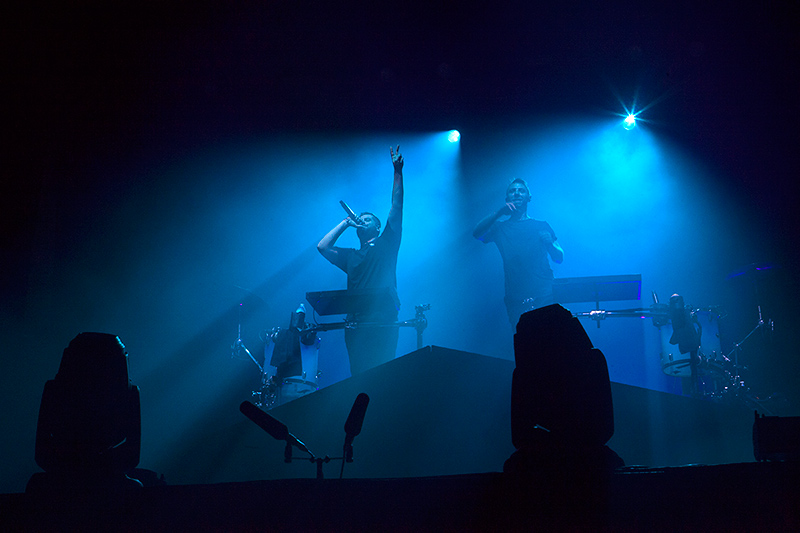 The Washington State natives started early, playing chill, trap-influenced dance music for a young crowd of fans who appreciate pretty lights. And there were literal fireworks immediately. First, there appeared trumpet players and a drum line of highly choreographed men and women smashing their drums in hoodie-color unison.

“Say My Name,” featuring Madelyn Grant, showcased both the duo who claim they never paid much attention to music until college and the vocalist who sent them a GarageBand recording and earned a spot on their sophomore album, In Return. Somewhat less of a green, unplanned success, Naomi Wild appeared live to sing her R&B vocal on “Higher Ground” from 2018’s A Moment Apart. Her performance did what the fire balls were supposed to: enraptured the crowd with a energetic, warm delivery. Leon Bridges’ pre-recorded intonations spread through Zilker on “Across the Room,” also from A Moment Apart.

A few notable but brief deviations from the billowing, bright, euphoric sounds Odesza are known for included playing about half of the mammoth, cinematic “Loyal,” a new single teased live since about 2015. The duo ventured briefly into electroland for an unreleased track as well, before ending their night with a pummeling of fireworks that trailed sparks like glitter across the dark sky.