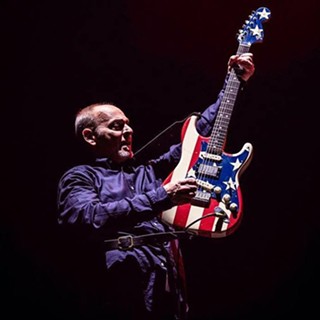 “I’m starting to sweat, you know my shirt’s all wet”: Wayne Kramer and his star-spangled Stratocaster (Courtesy of Shore Fire Media)

Forty-nine years and 11 months ago, five young Motor City musicians, high on LSD and communism, recorded one of rock’s most influential albums. Kick Out the Jams, captured live at Detroit’s Grande Ballroom, not only helped lay the groundwork for punk rock, it set the gold standard for music that’s loud and righteous.

Wayne Kramer, the MC5’s founder, bandleader, and guitarist, now christens that record’s golden anniversary with the MC50 tour. Alongside Soundgarden guitarist Kim Thayil, Faith No More bassist Billy Gould, Fugazi drummer Brendan Canty, and Zen Guerrilla singer Marcus Durant, Brother Wayne rolls into the Mohawk on Friday to cover Kick Out the Jams in its entirety, followed by favored cuts from Back in the USA and High Time. For Kramer, also an author and prison reform advocate, it’s time once again for revolution.

Austin Chronicle: When Kick Out the Jams was recorded in 1968, young people believed they could change the world. Do you think young people feel that way today?

Wayne Kramer: There’s a terrible apathy across the land. When you look at the statistics of voter turnout, it makes you wonder why people wouldn’t actively participate in the democratic process. It’s our most powerful opportunity to decide our own fate. If enough people had gone to the polls during the last presidential election, we might not be in the mess we’re in today.

It turns out that my challenge is not the Republicans or the capitalists. It’s my own apathy and sense of meaninglessness. That’s one of the reasons we’re out here on tour, to carry a message of determination and self-efficacy – that people can change the world if they go at it wholeheartedly.

AC: In the 2013 book Detroit Rock City, you say that “youth has certainty” and reminisce that the MC5 had certainty about their politics even if you didn’t turn out to be devout communists. Do you feel certainty now?

WK: I have certainty in very few things – much less than I did as a younger man. The world is increasingly complex to me and things are generally not binary. It’s not either, or. It’s many shades of gray. If you get to live a long life, at some point, that begins to sink in.

AC: In the promotional materials this summer for your memoir The Hard Stuff: Dope, Crime, the MC5, and My Life of Impossibilities, there’s a celebrity quote from Ted Nugent, who like yourself was a product of the Detroit scene. It heartens me that you two remain civil, despite having totally different social and political viewpoints. Is that something Americans can learn something from?

WK: I hope so. A vigorous discourse is a good thing, but to tell you the truth, I’ve never had a substantive political conversation with Ted. I would very much like to give it a try and see if he could discuss race or abortion or economics or foreign policy without hyperbole.

AC: Tell me about the art of the double solo. It seemed as though you and bandmate Fred “Sonic” Smith were sharing brainwaves in the MC5. How much of it is listening and how much of it is diving in with full trust?

WK: You have to be confident in each other’s playing, attune to it and adjust to it, while still developing your own ideas, motifs, themes, and having an overall sense of direction on where you want to go. It’s not easily done. You have to spend hundreds or thousands of hours playing together to really perfect it, but when it works, it’s spectacular.

AC: I’m excited to read your book. I know you didn’t write it just for therapy. What did you want to impart on your readers?

WK: I wanted to tell the story of the MC5 from the inside. A lot has been written about the band over the years, but I wanted to be on record as to what happened from my perspective as the guy who started the band and who’s still in the band.

There actually was a therapeutic component to this process of self-examination. It helped me figure out who the hell am I and why I made some of the decisions I made. I also wanted to leave a record for my 5-year-old son. It’s a written report on his father’s route to being a papa.

AC: Part of that route was doing time in prison on drug charges and later becoming a prisoners’ advocate. Can America’s prison system be fixed or does it need to be ripped down and completely rethought?

WK: Yes, of course it can be fixed. People made this mess and if people make a mess, then people can fix it. Will it be easy? Hell, no! This is a $90 billion industry and it’s gonna be very slow going to repurpose those dollars.

Still, you have to remember these things don’t happen from the top down. They happen from the bottom up. Regular people need to get involved out of their own self-interest, because if we don’t help people change for the better while they’re in prison, they will most certainly change for the worse. We ignore this fact at our own peril.

So, we try to help people figure out what went wrong and what they can do to never go back to prison again. Our policies and our legislation in this country has been the greatest failure in America’s domestic history. When I served my sentence in the Seventies, there were 370,000 people in prison. Today, there’s over 2.3 million … and crime is lower.

AC: How did you assemble the squad for this MC50 tour?

WK: My main main objective was having good brothers to tour with. Guys who are genial, mentally stable, intellectually curious, and good company. This can be very hard work at times, so I wanted guys who were seasoned pros that can roll with the punches and keep a happy spirit about them. I’ve succeeded beyond my wildest dreams. Kim Thayil, Billy Gould, Brendan Canty, and Marcus Durant are good brothers and we’re having a ball.

WK: Two bands that I feel are moving the music forward are Tank & the Bangas from New Orleans, a terrific combination of poetry and very sophisticated music, and the other would be the Dirty Projectors. They have their own take and style on music that’s very well done. I tend to appreciate people who have put a lot of work into their art and are highly accomplished.

I still listen to John Coltrane, Sun Ra, Albert Ayler, and Archie Shepp for inspiration. One of my favorite bands is Lake Street Dive, who maybe aren’t pushing any boundaries, but they are just so damn good that I am a huge fan.