Texan evolves past retro soulman in a modern star

If Leon Bridges’ hypnotic ACL Fest performance in 2015 knocked the audience into a deep coma, you might not have recognized the 29-year-old soul man whose tender croons revived then three years later at the Moody Theater. “Ya boy really graduated from C-Boys to ACL [Fest] to here?,” Bridges asked himself midway a 90-minute Saturday night set, the first of two sold-out shows at the premiere concert hall.

Besides his dapper getup, a characteristic vintage suit, everything about the Ft. Worth native appeared more in vogue and grandiose than before. His debut album, Coming Home, went gold (sales of 500, 000), but the night’s aesthetic matched that of 2018 follow-up, Good Thing. Bridges’ second album eschews the Sam Cooke and Otis Redding paradigm by trading acoustic Sixties gospel for Seventies/Eighties neo-soul that’s stylized for the dance floor as much the bedroom.

Opening in the spirit of Usher, the singer hopped onstage a bit stiff but charming as ever as he waddled to the uptown funk of “If it Feels Good (It Must Be).” His slicked back hair glistened against a gigantic LED backdrop glowing with his initials. A fivepiece band with two guitarists stood in for the White Denim-leavened backing from the tour three years ago.

A drastic departure from the Coming Home era, the moment felt as if it were packaged for opener Masego’s futurist soul. Taken aback, the crowd failed to match Bridges’ energy until he moved into the jazz-tinged Good Thing single “Bad Bad News.” Ringing against a thumping, bell-bottom groove, the main attraction crooned with the sweet bravado necessary to move an old soul to the dance floor.

Not until Coming Home’s title track did the audience transform from timid listeners to overzealous admirers. Bridges’ effortless and instinctive vocals empowered the house to bellow along and complete the entire second verse for the soul man as he stood raising his mic back at us. That momentum carried into more cuts off Good Thing.

“Georgia to Texas” spawned chills behind a heart-plucking double bass line accentuating Bridges’ nostalgic serenade. “Mrs.” seduced with a sloppy 6/8 kick and cross-snare exchange reminiscent of D’Angelo’s Voodoo. The evening’s only blunder was that of Good Thing itself.

Overproduced, the album sounds like an obvious attempt to mimic the success of Pharell or Bruno Mars. “You Don’t Know” and “Forgive You” washed away the flavor of Bridges’ voice with unneeded electro flair. Even so, Bridges offered a far richer experience than most can with just two albums to their name.

Moments that made you want to dance were as vast as those that made you want to squeeze your squeeze, as many did when he came out for an encore performance of “River.” Similar to his delivery of the Coming Home standout in 2015, Bridges, his guitar, and backup singer Brittni Jessie held the stage alone. Three years ago, he couldn’t meld such a wide range of feeling, style, and emotion.

Say what you will about Good Thing, but live, it elicits an evolved version of Leon Bridges that will carry him to new heights and new stages. The Erwin Center is next. 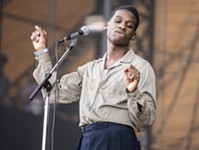 Leon Bridges
Texan soul great can do no wrong