The Time I Ruined a Marriage Proposal

Walker Lukens turns my misdeed into a Song Confessional

“What would you like to confess?” asked a voice from behind a thin wooden door as I sit in the back of an old travel trailer.

I’d prepared for this. That isn’t to say I’d spent all morning plumbing my psyche for my most painful regret. It’s a more accessible memory: a story that occasionally comes out during 3am discussions when the topic of conversation is “What’s the worst thing you’ve ever done?”

On this day, I was ready to have my most shameful misgiving processed into song. Alt-pop phenom Walker Lukens and his bandmate, drummer Zac Catanzaro, have been operating a unique music experience called the Song Confessional since the spring. Participants sit in the rear booth of a sapphire blue camper, complete with a holy water reservoir mounted on the wall, and tell their story to a songwriter hidden behind a sliding door. 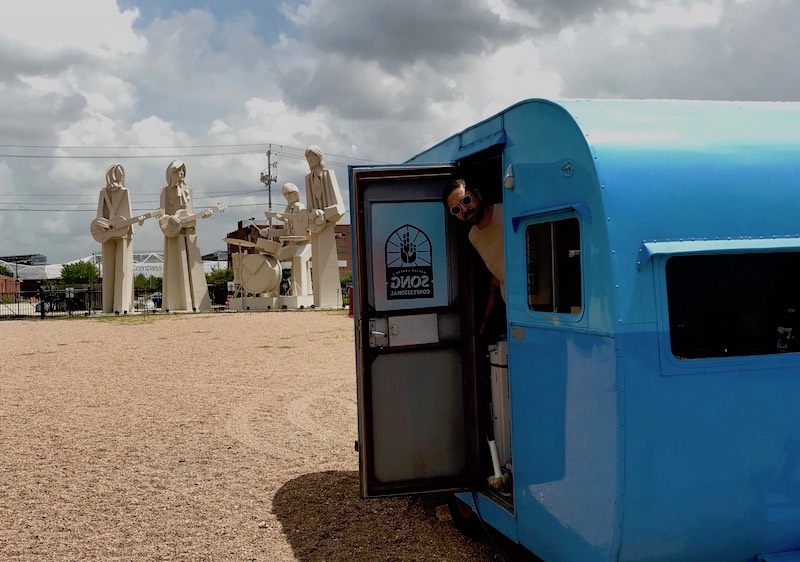 Often it's Lukens playing the role of priest. Other times it's been Austin artists like Sara Houser of Löwin, Cara Tillman from Moving Panoramas, Blood Pumps singer Bill Stevenson, and Aaron Blackerby of Major Grizz tasked with turning subjects' confessions into personalized pop songs, which are quickly recorded in a mobile studio set up in the other side of the camper. The confessor is ultimately given a recording of the song — what they do with it is up to them.

So on this afternoon in late June, I’ve located the Song Confessional in the back of the Native Hostel and showed up unannounced to tell Lukens about the time I ruined a stranger’s marriage proposal by turning it into a sexually explicit joke. I’m not in search of absolution and while I strongly believe that music is therapeutic, I am the transgressor not the victim in this story, so I don’t deserve to use the experience to help me move past an uncomfortable memory — in fact, I deserve to pay karmic penance for the rest of my life. I simply participated in this experience because I thought it would make for a good song.

While most of the Song Confessional material features lyrics inspired by the participant’s story, O’Brien and Lukens decided to use the actual recording of my confession — though pitch shifted to protect my identity — as the track’s narrative base. The resulting seven-minute song sounds like DJ Shadow scoring the misadventures of a remorseful prankster or, if we want to pretend there’s a life lesson in here somewhere, the scumbag version of Nineties spoken-word hit “Everybody’s Free (To Wear Sunscreen).”

Walker Lukens will perform at Antone's on Saturday. He and Catanzaro take the Song Confessional down to San Antonio for an appearance at Paper Tiger on Aug. 25.