Sam Smith understands the crushing pains of a breakup better than most. The English balladeer has made a living finding a voice through common confusion, anger, and tears. As much as his vocal tenderness, it’s the distilled conciseness in his inventory taking of emotional zeros and ones that has made the singer-songwriter a worldwide pop superstar. Unfailingly gracious to an oft-deafening crowd at the Erwin Center on Saturday night, the soulful 26-year-old demonstrated that he’s discovered an alchemy to easing joy into a mostly melancholy set. Serviced by his infectious charm, strong backup vocalists, and sense for the dramatic, Smith’s distinctly affecting voice bonds to his fans.

Show beginning sharply at 9pm with “Burning,” the singer appeared atop a triangular platform sitting on a chair and attired in his customary black suit. Unique staging, band placement, and lighting proved stories unto themselves. Also impressive was the expediency of song transition, with the band seguing into “One Last Song” from “I’m Not the Only One” as Smith sang with an effervescence generally found in fun pop songs, not forlorn ballads.

Likely still reeling from his reported breakup with 13 Reasons Why star Brandon Flynn, he addressed the miserable nature of his lyrics.

“I’ve realized my music is really fucking depressing,” he admitted, adding that he wanted to provide catharsis and joy throughout his first Austin show in two years.

As such, the weekend performance delivered a definitively upbeat affair, covering most of 2017’s The Thrill of It All and a few predictable choices. The set-list included stage and vocal theatrics on “Writing’s on the Wall,” his Academy Award-winning theme for the James Bond film Spectre.

The Cambridgeshire native told the BBC in 2014 that he “actually didn’t listen to male vocalists until about two years ago. I just listened to Whitney Houston, Chaka Khan. Massive voices.” His love of black music and artistry – most of his skilled band is black – is apparent.

There’s one artist he apparently takes after, perhaps to the chagrin of R&B lovers of the Eighties and Nineties. For the backend of a boisterously entertaining take on “Like I Can,” Smith and his harmonizers dipped into “The Best Things in Life Are Free” from Janet Jackson and (ding, ding, ding) Luther Vandross.

In the encore, the bandleader performed “Palace” on a grand spiral staircase, backup singer Lucy Jules singing from her own platform. That Smith made room for their vocal chemistry was profoundly affecting. Of course, he ended the proceedings with “Stay With Me,” because you give the fans what they want. 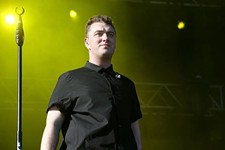