A guitar-strumming Beto O’Rourke tries too

A haze of fireworks and cannabis smoke hung over Wednesday’s Independence Day party at Circuit of the Americas, where concertgoers wore star-spangled duds and an enormous American flag backdropped the stage. 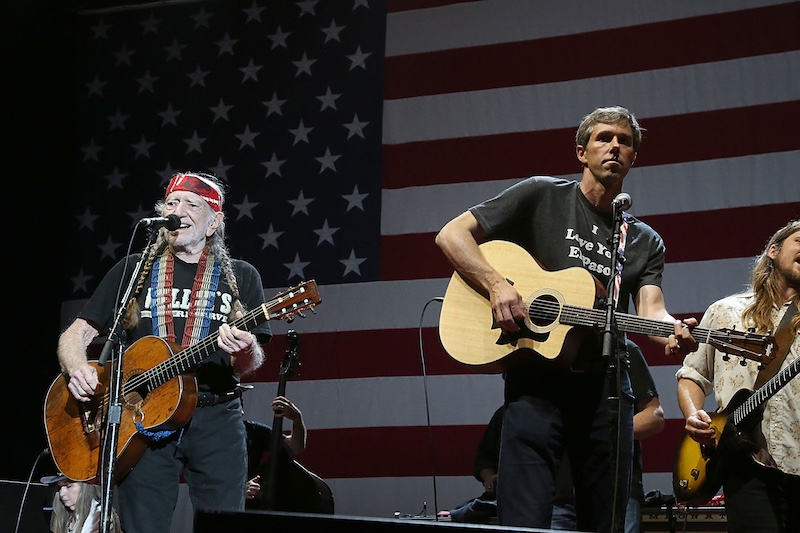 Willie & Beto: Nelson and O’Rourke (r), with Lukas Nelson at far right, Circuit of the Americas, 7.4.18 (Photo by Gary Miller)

Although Willie Nelson, 85, remains an outspoken troubadour of the socially progressive left, he attracts a bipartisan audience. For every “Alt-Country, Not Alt-Facts” T-shirt seen amongst attendees at his annual Fourth of July picnic, another read “Fuck your feelings. Drink freedom.” In Texas, and elsewhere, liberals and conservatives maintain a common love for Nelson going on five decades now.

Independence Day outs our patriotic urges. Whether pledging allegiance to the ruling party or dissenting a corrupt government, ones does so on July 4 because they’re a “patriot.” And yet, by sundown at Austin’s annual summer extravaganza – briefly evacuated on account of lightning – none of the performers had uttered or even muttered the name Trump.

Instead, they made statements musically.

Margo Price covered Creedence Clearwater Revival’s “Fortunate Son,” an anti-war anthem along class lines, while Lukas Nelson performed a new song called “Turn Off the News and Build a Garden,” which included the lines: “Turn off the news and raise the kids/ Give them something to believe in/ Teach them how to be good people/ Give them hope that they can see.”

Before offering an inspired version of Mexican standard “La Malagueña,” Ryan Bingham spoke about moving to the Texas border town of Laredo at 16 and learning guitar from an old mariachi.

“He was the kindest human being I’ve ever met,” lauded Bingham in underlining the cultural benefits of migration.

Waiting on Sturgill Simpson, who last year called Trump a “fascist fucking pig” while busking outside the CMA Music Awards but yesterday contented himself with performing an impressive set of lengthy, hyperventilating guitar jams sans outward politics, Asleep at the Wheel leader Ray Benson emerged onstage and declared, “We need to make Texas a better place for everyone.” Then he ripped open his pearl snaps to reveal a Beto O’Rourke shirt.

Texas’ U.S. Senate candidate, who earlier in the day made an appearance at Austin rock & roll bar Hotel Vegas, delivered an impassioned, three-minute speech about living up to the highest ideals of America – specifically, better serving veterans and embracing immigration.

“El Paso is one of the safest cities in the United States of America, a city that is safe, not in spite of the fact that we’re immigrants of the world over, but in large part because people chose to come to this country,” noted that area’s acting congressman. “They crossed Mexico. They arrived here at our front door in the United States and they were part of this American story.”

While overwhelming cheers resounded to O’Rourke’s vision of America, significant booing also occurred, particularly in the second level of amphitheatre seating inhabited by a significantly older demographic. One group near “Playback” became incensed when the candidate said, “We will not be a country of walls. We will not be a country that locks kids up in little cages.”

“Yes we will!” yelled one woman shaking a flag furiously.

O’Rourke then appealed to them as Texans:

Two hours later, during Willie & Family’s closing performance, O’Rourke quietly re-emerged with an acoustic guitar and played rhythm while singing backup on “Roll Me Up and Smoke Me When I Die” and “It’s All Going to Pot.” He stayed on for a curtain-call gospel medley of “Will the Circle Be Unbroken” and “Fly Away.”

Though he simply strummed open chords in 1-4-5 progressions, O’Rourke, who played bass in Nineties post-hardcore band Foss, which included future At the Drive-In vocalist Cedric Bixler-Zavala on drums, appeared very much in his element on Independence Day – even if he still has his work cut out for him in winning the outlaw country vote.