“It’s been quite a while since I played here,” offered Alejandro Escovedo on Saturday, the second installment of his two-night, packed-house return to the Continental Club. “I can’t tell you how much I missed everyone and how happy I am to see you again.” 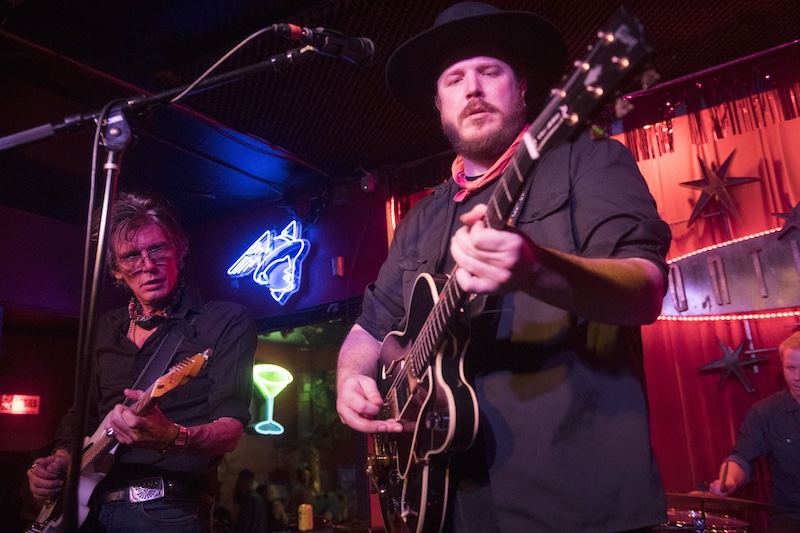 Home to the songwriter’s cornerstone residency before he moved to Dallas in 2016, the South Congress speakeasy vibrated a nostalgic pulse for the 90-minute set, Escovedo rocking with contemporary purpose.

“This song goes out to everyone that marched today,” he declared as the now-infamous recording of detained children crying at border camps bled into openers “Wave” and “Sally Was A Cop.” It felt like a necessary prelude and apt acknowledgement of these tumultuous times from Austin’s answer to Bruce Springsteen, a social and political appeal exclaimed at the conclusion of the set as Escovedo shouted “Fuck Trump” to enthusiastic, rebellious applause.

The performance began with the blast of “Always a Friend,” complete with Clara Reed jumping onstage to dance and fire the crowd amid a tumbling, three-guitar ambush. Axe men Mitch Easter and Eric Heywood led the seven-piece band into a freewheeling blur as Escovedo faced off with them on his own six-string. Longtime backup singers Karla Manzur and Gina Holton lifted songs like the soulful, Stonesy blues of “Rhapsody” into an anthemic swell.

“Horizontal” offered up the only selection from the bandleader’s most recent LP, Burn Something Beautiful, sparking a raucous call and response from the audience before before the band let up with the softer turn of “Don’t Need You” and “Sensitive Boys.” The closing run of “Chelsea Hotel ‘78,” “Velvet Guitar,” and “Castanets” left the crowd clamoring for more.

“Since we ended on ‘Castanets,’ there’s not much more we can do but set ourselves on fire,” Escovedo joked as he returned for an encore, launching into the Velvet Underground’s “Candy Says.”

Afterward, Easter took the reigns for David Bowie’s “Moonage Daydream” and the band finally bowed out by ripping the VU’s “Rock & Roll.” Escovedo allowed that he’d return to the Continental soon to stake out a short residency, but it was clear Austin has sorely missed its premier balladeer.

A decent portion of the crowd stuck around after midnight to check out Ben Dickey, supported by an all-star Austin backing that included Charlie Sexton, Bukka Allen, and John Michael Shoepf. Although Dickey and Sexton play counterparts Blaze Foley and Townes Van Zandt in the upcoming Ethan Hawke film Blaze, they mostly showcased songs from the fall release of Dickey’s new album, produced by Sexton at Arlyn Studios.

Clearly working out kinks as a live unit, the band plowed through an hour-long set that flashed the Arkansas native’s own songwriter promise. They cut a sound that swept across the full length of Interstate 10, through Southern blues and Louisiana swamp rock to Texan honky-tonk waltzes. Diving into the only Foley song of the set (“my favorite Blaze Foley song,” Dickey declared), the band unloaded a stellar version of “Sittin’ By the Road” against a chugging, chicken-scratched rhythm.

Dickey’s nasally drawl leans heavily toward Bob Dylan, especially in his phrasing. Still, the opening rockabilly swing of “Be My Guest,” southern rumble of “I Think It’s All Different,” and closing jam of “Tankerton Blues” with Sexton untethered on guitar highlighted Dickey’s own musical instincts following his already acclaimed cinematic turn.