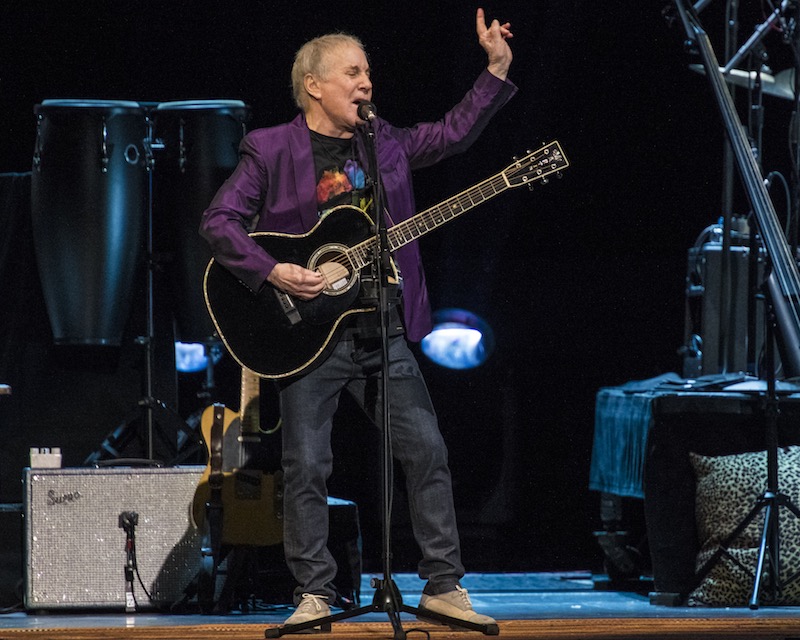 The tune’s reflective, searching tone, its iconic opening call to “let us be lovers” and “marry our fortunes together,” and its wide-eyed youthful hope and trepidation in the pursuit of life, both real and metaphorical, set the starting point for a journey through the songbook of one of our greatest living composers.

Throughout the evening, the immaculately orchestrated show – performed by a group 14 strong – pulled the house along on a tour of the marquee singer-songwriter’s rich musical musings over the past seven decades. From the boroughs of NYC through upstate farmlands; down to Louisiana and up to Graceland; across Jamaica, Africa, and Brazil; Simon sought out rhythms that melded his music to the weary promise of America.

The 16-time Grammy-winner, meanwhile, played conductor with an easy charm, bantering with calls from the audience at all points.

“I like the idea of not knowing what I’m going to do after this stops,” he admitted following “50 Ways to Leave Your Lover.”

Simon then jumped into early set highlight “The Boy In the Bubble” by announcing “most of these songs were written for you to get up and dance.” The enthusiastic audience responded accordingly, and although the arena appeared far from sold out, those in attendance received their money’s worth and then some in a program that surpassed even his three-night run at Bass Concert Hall two years ago and taping for Austin City Limits. Austin accordionist Joel Guzman also received a hometown spotlight when allowed to unload during an extended jam of the zydeco-ripped “That Was Your Mother.”

Following “Rewrite” from 2011’s So Beautiful Or So What, Simon offered his realization that the song’s narrator was “the same guy who got on the bus as a kid in ‘America.’” The revelation threaded the overall playlist – acknowledgement that so much of his catalog turns on the same quest. When he returned to that album later with “Questions for the Angels,” the line, “If an empty train in a railway station calls you to its destination, can you choose another track?” echoed the familiar opening verse of “Homeward Bound,” questioning how far we go only to always return.

The unexpected midpoint highlight belonged to a deep cut from 1983’s Hearts and Bones, “Rene and Georgette Magritte With Their Dog After the War.” Simon surrounded by yMusic, the young classical sextet added to the band for the tour, the moment struck gorgeously intimate. The photo that inspired the song flashed on the screen behind the band to underline the beauty inspired by a simple artifact.

Closing out the main set with “Diamonds on the Soles of Her Shoes” and “You Can Call Me Al” brought the crowd back to its feet to dance, but the presentation proved so much more than just a run-through of hits. Compared to George Strait’s hit-laden performance packing the Erwin Center the night before, where each earwig rang as pure as when it was recorded, Simon’s songs proved intricately organic, still evolving rhythmically even on this final tour. Most notably, as Simon pointed out before “Spirit Voices,” was Biodun Kuti’s guitar adding its own distinct flavor to the band in place of Vincent Nguini, the bandleader’s longtime guitarist who passed away last year.

A double encore sliced through the remainder of Simon’s expectant radio staples, starting with the chugging rhythm and slide guitar of “Graceland,” slipping into the tender “Still Crazy After All These Years,” and racing “Late in the Evening.” Though the screen malfunctioned during the first encore, it revived for the second’s photo montage accompanying “Homeward Bound,” and before the band bowed off stage, “The Boxer” received an almost Southwestern flair.

Monday ended as it should, with Simon solo acoustic onstage in a single spotlight. “American Tune” provided the perfect bookend to opener “America,” worn and tired, but hopeful and enthralled with the promise of a country and people. The Erwin Center has likely never been so hushed.

Offering his final salute with the “Sound of Silence,” Paul Simon left unaccompanied, hands raised in appreciation and the calmed anticipation of not knowing exactly what comes next.

“America”
“50 Ways to Leave Your Lover”
“The Boy in the Bubble”
“Dazzling Blue”
“That Was Your Mother”
“Rewrite”
“Mother and Child Reunion”
“Me and Julio Down By the Schoolyard”
“Rene and Georgette Magritte With Their Dog After the War”
“Can’t Run But”
“Wristband”
“Spirit Voices”
“The Obvious Child”
“Questions for the Angels”
“The Cool, Cool River”
“Diamonds on the Soles of Her Shoes”
“You Can Call Me Al”

“Graceland”
“Still Crazy After All These Years”
“Late in the Evening”