When asked about the theme of resilience in his “Blk Gold” single, Chucky Blk flashes back to his family. First he mentions his grandmother, who emigrated from Jamaica to Germany, learned a new language, and successfully raised three kids. Then the ATX MC cites his father, who worked with the Black Panthers challenging racial injustice in Los Angeles. Then he zooms out for a wider perspective:

“It’s an ode to black people,” he explains. “In this world where people are constantly trying to degrade us, where we live with a president who’s openly okay with the KKK and black people are being shot down every day, it’s so easy to feel like you’re not worth anything. Yet the fact that you’re here – in the face of the deadly transatlantic slave trade where someone survived for you – that’s beautiful enough. Take that blessing and do what you may.”

Directed by Victoria Prescott, the video for “Blk Gold” follows its lyricist journeying through the Eastside, including the George Washington Carver Museum, Rosewood Park, and the mural at 12th and Chicon. Treasures abound.

“I wanted to celebrate the community and highlight these places in a city with a declining black population,” offers Blk. “It’s just to say, ‘We see you, you’re gold.’” 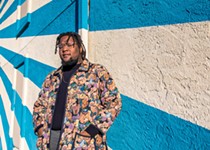