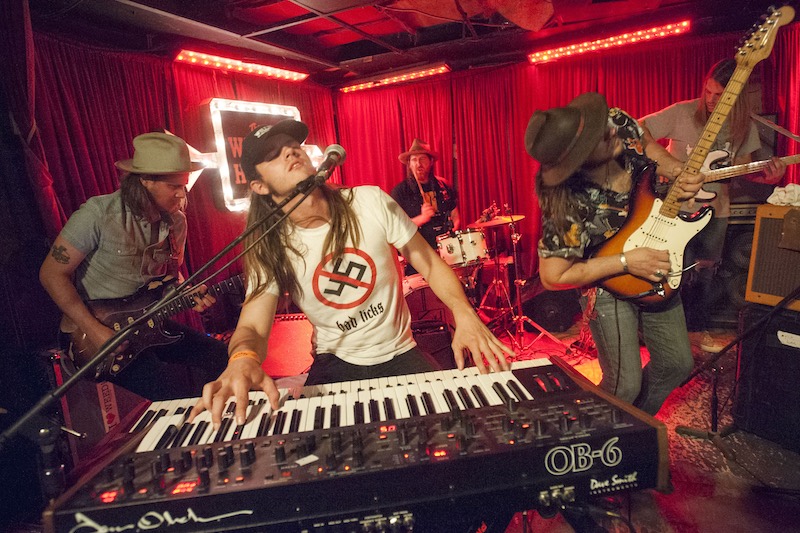 The Texas Gentlemen at the White Horse (Photo by John Anderson)

While the Texas Gentlemen may not exactly represent the sound of Lone Star roots right now, the versatile north Texas collective has touched nearly every important emergent roots act in the state over the past couple of years.

Bursting out of Dallas’ Modern Electric Sound studio, the band has worked with artists ranging from Paul Cauthen to Leon Bridges, and served as the go-to backers to legends like George Strait and Kris Kristofferson. On their own, the outfit rolls with an eclectic country funk groove.

Jonathan Terrell opened the Hot Luck Fest’s country kitchen, sparking the dancefloor of his familiar stomping grounds with an hour set that has become exceptionally tight. The five-piece licked through cuts from 2015’s Past the Lights of Town, and gave Terrell’s gritty barroom vocals a rocking edge on new songs that tilted towards Ryan Bingham. The lanky songwriter even took his own turns through crowd as the band ripped through “Little Sister” and Neil Young’s “Heart of Gold.”

The Gentlemen laid bare influences like The Band’s Stage Fright-era with a cover of “The Shape I’m In,” though Little Feat might serve as the best touchstone for their ranging roots funk send ups, which even exhibits elements of Seventies prog pop like Wings as the group constantly torques through songs. The crowd had thinned considerably by the evening’s end, but those that held out for dessert were treated to a nearly ten minute closeout jam of “Shaking All Over,” emphasizing why the Texas Gentlemen are one of the most exciting acts in the state right now.