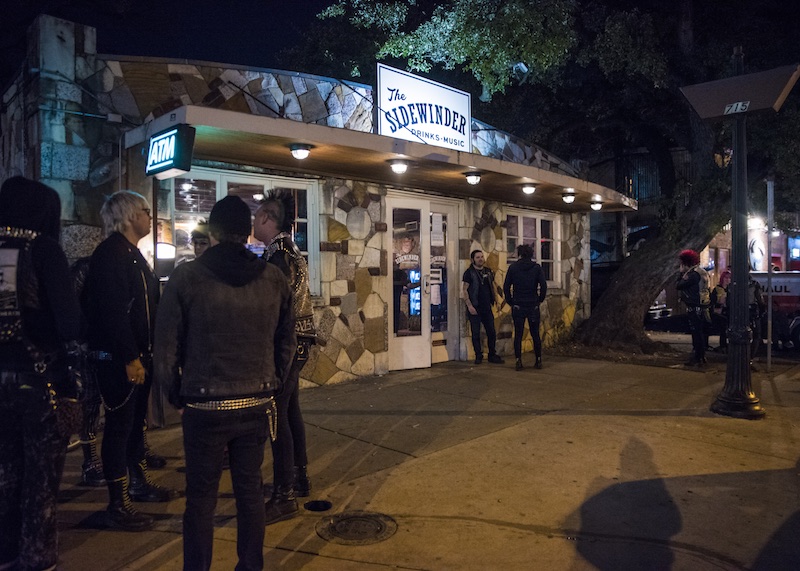 Sidewinder, the two-stage Red River Cultural District club, closed this week and many of its upcoming concerts are being relocated. Owner John Wickham is in talks to re-sign a lease on the property and open another live music venue there with a new partner.

The beginning of the end for Sidewinder arrived the week before South by Southwest, when representatives from Austin’s Fire Marshal's Office decreased the capacity of the club’s back patio from 239 to 49. According to Wickham, the reduced occupancy came as a result of city staff’s reinterpretation of what are considered exits and entrances. The high accommodation on the creekside balcony had been in effect since the structure was added to the Red Eyed Fly going back at least a decade and a half.

The lowered capacity caused operators to lose significant income during the March mega festival, a week when local venues depend on big profits that will then float them through the historically slower month of April. The reduction also changed the size of concerts Sidewinder could host, which continued to diminish earnings in the ensuing weeks.

Wickham, who also owns Elysium and Valhalla, and his Red River Cultural District neighbor, Empire Control Room & Garage partner Stephen Sternschein, have been in talks to transform Sidewinder into a new music venue. An essential piece of that plan is to make renovations to how the space’s entrances and exits are set up in order to restore its higher capacity. Before they can make that investment, a new lease needs to be signed. Sidewinder has been on a month-to-month contract.

While the club owners hoped for a smooth transition between venues, Wickham and Sternschein remain optimistic about inking a lease agreement in the coming days. According to the two late Thursday night, they’ve been in talks a while and are prepared to partner – all they need is for the landlord to be ready as well. City records show that building is owned by Jimmy Nassour at Cabot Chase LTD, a major landowner in Austin.

That the property at 715 Red River continues to host concerts is crucial for the venue density of Austin’s most walkable live music strip. That block, the east side of Red River between Seventh and Eighth, has remained flush with clubs since the Nineties. Red Eyed Fly opened in 1999, followed by Elysium and Beerland in 2001. Given the closure of Emo’s on the corner of Sixth and Red River in 2011, and a series of clubs shutting across the street – Headhunters, Room 710, Bull McCabe’s – if the Sidewinder spot gets redeveloped into a non-venue, it’ll be a blow to the Red River Cultural District and Austin’s downtown music profile in general.

Sidewinder opened in late 2015 and initially included operators of then-recently shuttered Seventh Street venue Red 7 as partners. It featured nightly live music – often local shows on the smaller front stage and touring acts in the back.

This story will surely develop. Stay tuned our Daily Music page for updates.