The ABCs of psychedelia

Repetition is an important component of psychedelia, from adaptations of the German motorik beat to one-chord drones and endless boogie. The final night of Levitation 2018 at Empire Control Room brought a little from columns A, B, and C from an five-hour international showing. A frequent flyer since the bygone days of Austin Psych Fest, Acid Mothers Temple may well have played Levitation more times than anyone except the Black Angels. That’s because few bands from any country take the notion of mantra and drone to such delirious heights.

Drummer Satoshima Nati and bassist Wolf struck an aggressive groove, guitarist/bouzouki player Jyonson Tsu bellowing for a couple of verses, while AMT mainstays Kawabata Makoto and Higashi Hiroshi locked horns on guitar and electronics respectively. Feedback screamed, synths bleeped, amplifiers howled in unison, and songs stretched into double digit lengths. Kawabata frequently pointed his Strat toward the sky during moments of peak chaos, a dramatic gesture to indicate where he wanted to take us.

Following AMT’s incendiary set, Wooden Shjips felt like a comedown. The San Francisco troop, led by Moon Duo’s Ripley Johnson, drew as much inspiration from Northern California ancestors Quicksilver Messenger Service as it did from mantra masters like Guru Guru, lowering heart rates with more boogie than blast. Johnson’s lead guitar favors plangent tones and melodic phrases, which may have been just what the wired audience needed after AMT’s assault.

That proved enough for Wooden Shjips to receive as much, if not more, applause than the band whose stage it retook. 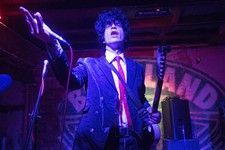 Levitation: Escape-ism
It’s cold and lonely at the top