Levitation’s sweltering, sold-out Saturday afternoon at Barracuda didn’t know what it wanted to be. Ping-ponging between both genre and stages – garage rock, psych-prog, and bat-shit freak-punk – it wasn’t until Omni and La Luz that the afternoon clicked.

Only a few minutes past their 5:15pm slot, Omni took to the inside stage. A wiry sound all sharp edges and corners, like the instruments prodding at one another, the Atlanta trio’s stark post-punk prickled through the mostly full room. They worked through the propulsive “Equestrian” and “Southbound Station” from last year’s sophomore album Multi-Task, “Wire” from 2016’s Deluxe, new single “Sunset Preacher,” and a frenetic, unreleased track.

Bassist/vocalist Philip Frobos’ bass sourced out grooves constantly, a kind of nerd-funk that called for at least some headbanging. Despite excellence, the jarring, technical instrumentation and off-kilter energy of Omni didn’t jive with the flatness emitting from the audience by that point in the day. Inside slowly emptied in anticipation of La Luz’s 5:45pm set. Teeming with sunburned hipsters, Barracuda’s backyard maxed out by the time the fourpiece launched a jammy interlude followed by nervy new track “Cicada,” with its constant pitter-patter of cartoonish synths. A surf-noir made for afternoon listening, La Luz focused on material from its upcoming third LP, Floating Features.

Not that it precluded time for some classics.

The swaying “Call Me in the Day,” with its girl-gang doo-wop vocals and moody guitar punches, unfurled lazily, atmospheric, only to be punctured by Alice Sandahl’s keyboard solo. “Sure As Spring” played out jumpy intensity, a stylized, cinematic sound hellbent for the soundtrack to a Quentin Tarantino film.

Introduced as a “scary song” and inspired by a bout of sleep paralysis, latest single “The Creature” slunk along with a sinister air. Shana Cleveland’s blithe vocals and airy harmonies from her bandmates rode furrowing bass and the upward flourish of the frontwoman’s guitar lines. The bite of fear lingered, but glazed over with a subdued sweetness, a haze of pleasantry.

That’s La Luz, dreaminess teetering on the edge of a nightmare. 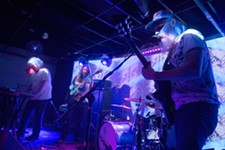