One could argue that the single most important aspect of the Old Settler’s Music Festival isn’t what happens inside the gates. It’s the camping. 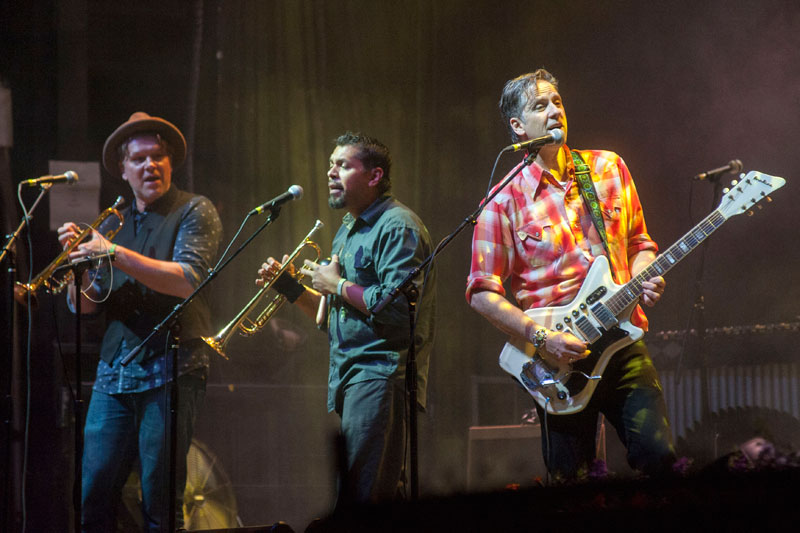 Calexico at the Old Settler’s Music Festival in Tilmon on Friday, April 20 (Photo by John Anderson)

By the time yours truly arrived at the 31st annual roots convergence this past Friday, afternoon storm clouds shrouded a remarkably dense campground easily 10 times the population of the 117-person farm community of Tilmon where OSMF took up residence over the weekend. This forest hamlet of tents, RVs, tapestry-slung canopies, and even one couple camping below deck in a fishing boat had began amassing the previous week. The sight of familiar OSMF tribes named Camp Fancy Pants, Camp Bayou Love, and Camp Bamboozle evidenced that diehards who once staked claim in Driftwood’s Camp Ben McCulloch had come to help settle new ground.

“Playback” made a quick round of the 22-acre campground’s many picking circles, where you’re almost as likely to jam old-timey tunes and bluegrass standards with a retired judge from Waco as you are a hippie from Austin. After retreating to my van for a badly needed nap, I awoke to the sound of an air horn and people cheering from every direction, prompting the realization that I’d almost slept through 4:20pm on April 20. A nearby group welcomed me to their camp, where I met their paterfamilias, who’d spent the last few months clearing brush and stumps to carve out room for campers.

“It didn’t look like this yesterday,” exclaimed the volunteer, who preferred to be left unnamed, of the camping section’s down-to-the-wire preparation.

Of OSMF’s 700-deep volunteer base, he populated an elite group of roughly 40 “site preppers,” who stayed out on the 145-acre property building roads, cutting and hauling timber, and spreading mulch and rock to create the physical infrastructure needed to make the festival happen. This is something Central Texans do: put in thousands of hours of free labor for a festival because they believe the hang is special.

“It’s been a long journey. There’s been so many hurdles and challenges,” acknowledged the festival’s executive director Jean Spivey in regard to getting the OSMF-owned property ready a year earlier than expected after getting the boot from their 16-year home at the Salt Lick Pavilion in Driftwood. “I’ll tell you right now, if it weren’t for the volunteers, I know we could not have done it.”

Tears welled up in Spivey’s eyes when she talked about the event’s pro bono help.

“I think they did it for the love of the festival and wanting to see it continue. They’ve taken ownership of the land in a way that makes my heart sing.”

Inside the festival gates on Friday, where Arizona’s Calexico delivered a masterful set of Latin-imbued indie rock and Michigan’s Greensky Bluegrass headlined with a cover-heavy jamboree, crowds were lighter than normal for an institution moving into its fourth decade. While Spivey admitted that pre-sale tickets weren’t as high as she had hoped, the true achievement was that the fest happened at all this year.

Last September, news broke that OSMF’s Director of Operations Scott Marshall and Production Manager Ryan Brittain had broken off to start their own roots music enterprise called the Driftwood Music Festival, which was originally scheduled to take place on the same April 19-22 weekend at the Salt Lick Pavilion. A subsequent lawsuit filed by Old Settler’s against DMF resulted in an out-of-court settlement stating that the latter would not hold their festival during March, April, or May until 2023.

On Friday, Spivey characterized the events of the past half-year-plus as “challenging.” Beyond the risk of a competing festival dividing OSMF’s customer base and prepping a new site a year ahead of schedule, she had to hire out two of the event’s biggest roles, production manager and operations director, while taking on new responsibilities. OSMF’s executive director of 12 years was only half joking when she said she hadn’t slept in two months.

Asked what she needed to see over the weekend to make the hard work worth it, Spivey replied, “I’m already seeing it. It’s the community here.”

Throughout the event, which endured a slight rain delay on Saturday, the family circle appeared to remain unbroken. The omnipresent dancing guy who loans out glittery shawls to fellow festers boogied in front of the stage as usual, OSMF’s longtime media partner, Sun Radio, recorded performances and introduced bands, and the crown-wearing gentleman who hands out food backstage all proved present and accounted for. Another crucial cohort that remained aligned with Old Settler’s through the move was the Camp Goodtimes crew, which hosted the incredible Camp Shhhtimes after-show series where hundreds gather in monk-like silence to witness late-night acoustic sets from acts like flat-picking phenom Billy Strings and soulful education advocate Possessed by Paul James.

Following many difficult months marked by mudslinging and moving in haste, OSMF retained its most important aspect: community.