“I am the rain, I am the new year, I’m the way home,” insists Kim Deal on “New Year,” opening track of the Breeders’ seminal 1993 album, Last Splash, and first song in the band’s set at Emo’s last night.

That proved an enduring thesis for the sold-out show packed with enraptured devotees, largely people in their Forties and Fifties, who came of age alongside the band. It applied to the rest of us, too, those lucky enough to have cool parents or older friends or simply the internet to lead us to the group’s guiding light. To all in attendance, the Breeders represent a certain way home. From start to finish of the foursome’s 90 minutes onstage, the adoration was palpable, electrified. Each opening guitar line began a favorite song, dispelling the notion that a “casual” Breeders fan could exist. Such is the magic of the group, particularly with the all-star line-up from Last Splash: Jim MacPherson behind the drums, bassist Josephine Wiggs, guitarist Kelley Deal, and her sister Kim Deal fronting the band on vocals and guitar.

Most of Saturday night’s performance pulled from Last Splash and last month’s All Nerve. Two albums and 25 years separate the releases, but the through line of Kim Deal’s songwriting remains unwavering behind the signature lilt of her honeyed voice, which stands in stark contrast to the hammering, distorted instrumentation thrumming beneath it. Braiding the Breeders’ catalogue into one enormous tangle of cerebral grunge at Emo’s offered a study of all the ways one can subvert pop – what it looks like to annihilate an expected song structure.

“Josephine has agreed to do some Title TK songs, so we’ll see what happens,” Kim deadpanned early on, then launched into the brash, bratty “Huffer,” anchored by a quavering bass line and a recurring “da da da.”

Deal led the band back to the 2002 LP a few tracks later, slipping into the syrupy simplicity and sparseness of the beloved “Off You.” Instead of banter, prolonged moments of silence filled in between songs during tuning and instrument switch outs, the Breeders puttering around on stage. “I love you, Kim! I love you, Kelley!” shrieked into each moment of calm, an audience hanging on every move from the sisters, who glowed as they soaked it in.

Throughout, All Nerve cuts rallied instant classics, such as the punchy “Wait in the Car,” wherein Kim gleefully shrieks mid-way through, “Wait in the car, I got business!” And don’t count out the sinister, no wave-sounding “MetaGoth,” with Wiggs taking vocals. The meditative eeriness of the lurching “Walking with a Killer” and slow-moving crash of the title track both sounded like Breeders circa the early Nineties.

Or maybe it’s the other way around.

The propulsive, pummeling “S.O.S.” and distorted, groundbreaking dissonance of “Cannonball” from Last Splash sound like the Breeders 2018. That’s part of their bewitchment. Musically, they’re a band that neither intentionally matures nor pulls from nostalgia.

They just are – singularly focused on creating the sounds in Kim’s brain, present and imperfect, both elation and endurance. 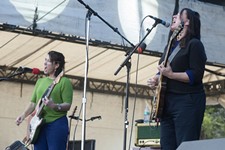