Sisters prove the measure of their society

French-Cuban twin sisters Naomi and Lisa-Kaindé Díaz come together as Ibeyi, the Yoruban word for “twins,” composing simultaneously haunting and optimistic rhythms that blur the lines between song and space. The latter spoke by Skype from her home in Paris before heading to the States to begin a U.S tour that stops at Mohawk on Wednesday, April 18.

Much like their name, Ibeyi’s music is deeply rooted in the culture of Yoruba, an African ethnic group. Their sophomore full-length, last fall’s Ash, also focuses on womanhood. It’s a breathing diary lined by spoken word samples, uplifting hooks, and steady electro thumps that move your body as much as your soul. Austin Chronicle: I grew up in the States but am Mexican and Chinese, so I identify to your upbringing and existing in different worlds. Listening to your new album, I felt like you were empowered by that, whereas that’s something I’ve always struggled with. How did y’all get to that point?

Lisa-Kaindé Diaz: Probably because we were surrounded by people that didn’t care at all. When we would be in Cuba, they would say that we were Cuban and wouldn’t be shocked. Then, when we would be in France, they would say we were French and wouldn’t be shocked. We really grew up between these two cultures and we would always try to bind both of our cultures. We would bring friends to Cuba and we would see Cuban friends in Paris, so I think that’s probably one of the reasons why.

In terms of art, I think it’s because our father was so unafraid of mixing genres. He was not afraid. He loved to mix. He loved to use different types of music to create music that he felt was his music and his identity.

AC: What did you listen to growing up?

LKD: I was listening to a lot of jazz because I was studying jazz, so all the big jazz singers we all love. My queen is Nina Simone, but I listened to Ella Fitzgerald, Sarah Vaughan, Chet Baker, John Coltrane. We would also listen to loads of Latin jazz because of our father, or Cuban music because of our father, and loads of Yoruba music, loads of pop music actually! We would dance to Beyoncé. Since she was little, Naomi loves hip-hop. She listens to so much hip-hop.

AC: I noticed that “Me Voy” was kind of reggaeton.

AC: Did you make the song that way on purpose or did it just come out that way?

LKD: We have – and when I say “we,” I mean particularly NaeNae – such an intense relationship with rhythm and dancing movements, and what it means to go to the club. What that energy means and what it means to just dance. When we were doing the first album, she said to me, “The second one, there’s going to be more hip-hop and more dancing songs.” While we were doing this second one, she was like, “The third one, Lisa, you have to prepare yourself, because it’s going to be twerking time.”

It’s really important for her and the funny part is, now that we are performing those albums live, I realize how important it is to make people dance at the live shows. It’s so important to see how their bodies move, and to see them sweat and express themselves through movement. It’s quite beautiful.

AC: I was reading how you write for the live show. How does that translate in the studio? Is that something you’re constantly thinking about?

AC: Another theme that struck me was how this album is for women. Ibeyi sampled Michelle Obama and your sister reads stuff from Frida Kahlo’s diary. How did all that come about?

LKD: The Michelle Obama story is quite incredible. That song is called “No Man Is Big Enough For My Arms.” That sentence I read in a book while we were recording a song called “Widow Basquiat.” It’s amazing. It’s about one of Basquiat’s loves named Susan, who explains that when she was 6, a man came to see her and told her, “One day, I’ll come back and I’ll marry you.”

And at 6 or 7, she looked at him and she said, “No man is big enough for my arms.” Listening to that touched us in such a deep way, looking at it, reading it. The next day I said, “We need to do a song.” Our producer Richard [Russell] said, “Oh that’s a song, definitely.”

We were doing the album during the American election and Trump had said “grab them by the pussy,” to which Michelle Obama did this absolutely amazing speech in response to that awful sentence and we were touched. The funny part is I hadn’t heard the speech, but my sister had and Richard had, and we heard it all over again. We couldn’t just take a little piece. We just wanted a word like “woman” or something like that, but listening to it we felt so connected with it. We felt it was so poetic.

She says, “The measure of any society is how it treats its women and girls.” That’s so accurate and true, and perfectly clear. And the fact that she says “my story is your story” was really inspirational, so we wanted to have a piece of it. We sent a message to her team asking if she would be okay with us using it, trying to clear it when everyone thought we would not be able to do it, and she said yes! We were really happy.

AC: Was it a similar story for the Frida Kahlo line on “Transmission”?

LKD: Frida is different because in my family we have been such big fans of Frida since ever. I grew up seeing Frida paintings, reading her diaries, buying books about her, and being very connected to her – as were all the strong women in my family. We were doing the album and it is kind of the same in a way. The amazing Richard Russell was like, “I think we need a sample.” He has this sixth feeling about when a song needs a sample and every time he says that we get really excited, because it means we’re going to find amazing spoken word, or an amazing sentence in a book or something that someone said that is mind blowing. It’s always really exciting.

He was like, “I think it needs to be a woman,” so we were like, “Who could it be?” We were making this song about transmission and I was thinking, “Who is an artist that has transmitted so much to me?” I thought about Frida, so I called my mother and said, “Ma, we need you to choose your favorite line in Frida Kahlo’s diary, one that you love.” Of course she found the best one: “Pies, para que los quiero si tengo alas para volar.” “My feet, why do I want them if I have wings to fly.” She said it on her iPhone and when we heard it, it was perfect.

AC: How many languages do you speak?

LKD: Three. Well, not the best English, but two really well and one okay [laughs].

AC: The first and last song on the album are the same, an ode to the the orisha Eleggua. Did you and Naomi decide to do that in the initial writing process?

LKD: We always knew we wanted that. It’s almost like a tradition. Loads of Cuban musicians, for example, go onstage and start with a song they call Eleggua. They rarely start with a chant for Eleggua, but they start thinking about Eleggua or talking about Eleggua, and our father used to do it. It was so natural. We didn’t really reflect on it, it was just kind of like, “Yes, of course we’re going to start with Eleggua, because he’s the god that opens and closes the path.”

He’s the god of life and in every Yoruba ceremony you start and close the ceremony with Eleggua, so it’s also a way to call the spirits, a way to concentrate, a way to take away your fears also. I think it’s very important to start with a song that means a lot to you. The first song on the album has to be really tight. 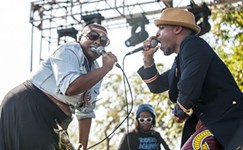 Remixing Against the Storm
Perennial Austin Band of the Year contenders keeps it RE:AL 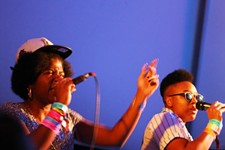