“This next song is off The Ooz,” announced King Krule in an almost indiscernible British accent Tuesday night at a sold-out Emo’s. Suddenly my feet were dragged across the beer-slicked floor, my bun became a low pony, and my body lifted onto a mosh I didn’t seek out. As “Dum Surfer” began, the crow thrashed. 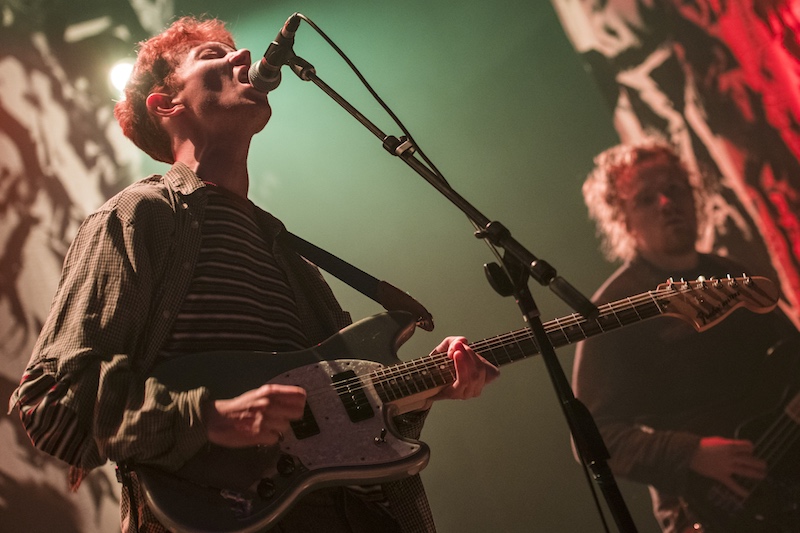 A fever dream of punching drums, guitar solos, and the singer/rapper’s signature low snarl, the song helped ring Austin’s bell for a full 90 minutes. And while at first glance Archy Marshall, 23, appears a lanky ginger with a pension for cigarettes that might stereotypically write shoegaze heartbreak tunes to serenade cat-eyed girls with baby bangs, instead his audience proved predominantly male, predominantly young, and predominantly into tucking in their shirts.

Starting promptly at 9pm behind “Has This Hit?” off acclaimed 2013 debut 6 Feet Beneath the Moon, the show began red in the face via spotlights trained on the faux ripped fabric draped behind the stage. Both proved as ominous as the ensuing soundtrack. The post-punk anthem ascended until Marshall began crying out, “There is no meaning, girl. I’m the only one believing,” as he clutched the mic and his hair.

Accompanied by drums, keys, guitar, and bass, the saxophonist deserved almost as much recognition as the bandleader. The stage darkened to a deep blue for “Ceiling” off the same album. A similar post-punk instrumental but less complex, its brooding beats layered in with Marshall’s growl, something of a distorted spoken word vehicle.

“Hey Austin, it’s nice to be here,” he nodded. “This song is about reptiles.”

“Lizard State” began to play and so did the crowd, stirring the mosh again to rhythms spearheaded by the sax player. The scrum mirrored the underlying angst of the show itself, musical frustration that’s festered into a mesh of punk rock and jazz so odd there might not be any recourse but to slam dance. This music is catharsis incarnate.

“Lokomotive,” “Cadet Limbo,” and “Biscuit Town” continued the aural enticement, the latter two off The Ooz. They brought the tempo back down with trickling keys and soft drums. Marshall then transitioned to the fury of “Half Man Half Shark,” a tornado of fuzz, drums, and sax carried by his deep and saturated voice. “Baby Blue” and “Easy Easy” closed out following similar methodology of a calm start before climaxing with the singer abusing his guitar.

He peaced out and the venue finally took a breath. The post-show come-down was short lived as the crowd began demanding more. It worked, of course, so “Out Getting Ribs” put out a heartbreak call for a lover to come back before everyone onstage disappeared for good.

Once the the lights came back on, it was if the last hour-and-a-half hadn’t happened. The room’s marijuana haze and lighting that had made the main attraction look like a silhouette tilted the whole experience into the realm of the otherworldly.

Archy Marshall’s mastered the juxtaposition of being juvenile and mature at the same time. He projects that into music that’s somehow ahead of its time, validating kids’ emotional complexity when most call it whining. That’s his trick.